The Trump administration is seemingly seeking to review the Iranian nuclear deal, but will likely face the lack of support from the parties to the original agreement, China, France, Germany, Russia and the United Kingdom, because Iran has fulfilled its side of the bargain, experts told Sputnik.

MOSCOW (Sputnik) — The United States may encounter difficulties in convincing its partners on the so-called Iran nuclear deal, China, France, Germany, Russia and the United Kingdom, collectively referred to as the P5+1 group, to side with its decision to review the agreement, experts told Sputnik.

On Tuesday, US Ambassador to the United Nations Nikki Haley suggested that the United States should launch a congressional debate on whether the landmark 2015 nuclear deal with Iran, officially known as the Joint Comprehensive Plan of Action (JCPOA), was in US national security interests. The US official stressed that the United States would not be withdrawing from the deal, even if US President Donald Trump decided that Iran was not complaint with the terms of the agreement. 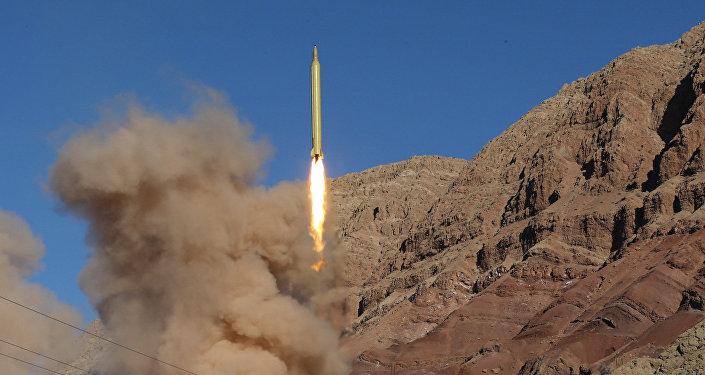 © AFP 2019 / Mahmood Hosseini /TASNIM NEWS
Iran Responds to US Sanctions by 'Boosting Its Missile Program'
According to Haley, the deal fell short of what was initially promised as the Iranian nuclear program was put on pause rather than shut down and the "anytime, anywhere" inspections of sites were not, in fact, available unconditionally.

"The Trump administration display resolve and serious attempts to evoke the agreement so Iran can budge in to US demands, including concessions elsewhere in countries such as Yemen, Iraq, Syria, and Lebanon. Whether such efforts will lead to congressional vote remains a long shot to pitch," Imad Salamey, Associate Professor of Political Science and Director of the Institute for Social Justice and Conflict Resolution at The Lebanese American University, told Sputnik.

Trump could potentially impose sanctions on Iran through an executive order, bypassing the legislative branch, however, the Congress had to approve the JCPOA, so it would have to be involved in its renegotiation as well. The Congress was divided on the original agreement, with Democrats mainly backing it and the Republicans mostly in opposition. The Democrats are likely to protest against the renegotiation of the deal.

Since January 2016, the International Atomic Energy Agency (IAEA) has been issuing quarterly reports in which it monitors and verifies Tehran’s full compliance with the nuclear-related commitments. Nevertheless, Washington has remained suspicious of Iran's compliance.

© AP Photo / Ebrahim Noroozi
IAEA Doesn’t Check Iran Military Sites for Nukes Because There’s ‘No Reason To’
According to Mohammad Marandi, a professor at Tehran University, the United States was the one in breach of the agreement, both under former US President Barack Obama and now, under Trump.

In July, the US Senate approved a bill on new non-nuclear sanctions against Iranian individuals and entities over the country's missile program and alleged human rights violations. The move has been widely criticized by Iranian officials, who claim that the US bill violated the provisions of the 2015 agreement.

"It seems at the moment that the United States is either trying to put more sanctions on Iran to make JCPOA meaningless for Iran, so the Iranians feel that there is no alternative but to withdraw. On the other hand, there is a possibility that the United States may simply want to find an excuse to say that Iran is not complying and then withdraw," Marandi said.

In mid-August, Iranian President Hassan Rouhani told lawmakers that Tehran could withdraw from the JCPOA within hours if the United States continued to threaten Iran and escalate rhetoric about adding new sanctions.

Haley said in her Tuesday speech, that Iran had committed multiple violations since the deal went into force, pointing out that Iran had been discovered exceeding the limit on heavy water twice.

© AP Photo / ISNA, Hamid Foroutan, File
‘Trying to Engineer a Conflict’: Why US Rages After IAEA Blocked From Iran’s Military Sites
The Trump administration appears interested in reviewing the Iranian nuclear deal, but other parties to the original agreement, China, France, Germany, Russia and the United Kingdom, may be reluctant to fully side with it.

Salamey suggested that the United States may convene a meeting with JCPOA partners and ask to establish new monitoring requirements, such as open access to suspected secret military sites.

"Most probably renewed negotiations will be initiated that satisfy the new US administration's requirements," Imad Salamey said.

However, according to Marandi, the United States would find it difficult to persuade other states to side with it.

"Especially since all the other countries in the P5+1 have repeatedly acknowledged that Iran has fulfilled its side of the bargain and that it has been complying with the agreement. Taking this in consideration and the fact that Trump is not popular among EU countries, the Chinese leadership and the fact that the US has sanctioned Russia, makes it much more difficult for the United States to create any sort of an anti-Iranian coalition. Some of these countries will actually side with Iran," Marandi explained.

Russian Deputy Foreign Minister Sergey Ryabkov said in late August that Moscow was focused on trying to persuade Washington to continue implementing the original agreement, while French President Emmanuel Macron said in August he saw no alternative to JCPOA.

German Foreign Minister Sigmar Gabriel said in June that Berlin was committed to the deal and would try to hinder any attempts to obstruct it.