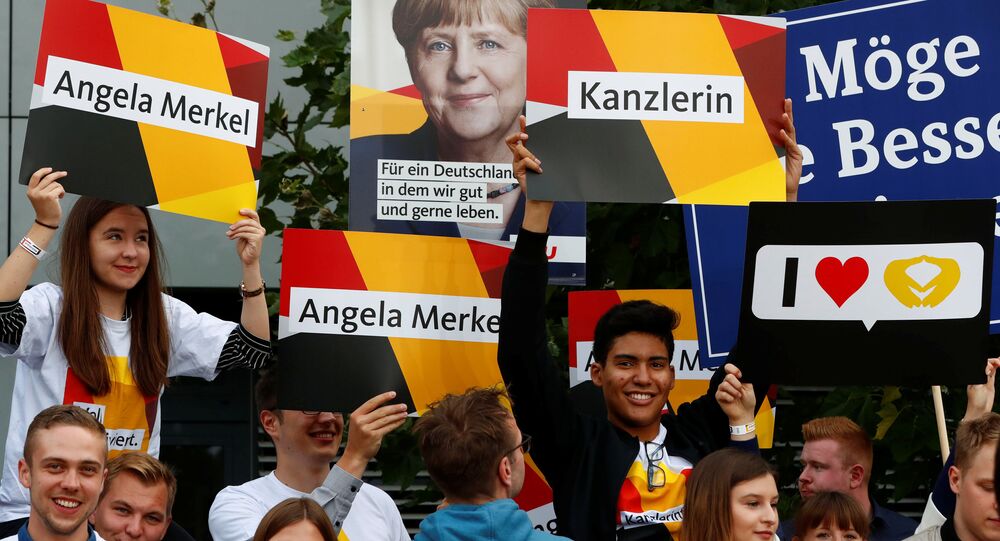 This month's general election could see the far-right Alternative for Germany (AfD) breaking through the five percent threshold and entering the Bundestag. However, it won't be a game changer, as an expert told Sputnik he expected Germany's two biggest parties to dominate.

The five percent threshold is important in the German political system, Dr. Paolo Chiocchetti, an expert on German politics at the University of Luxembourg, told Sputnik.

"It is limiting the emergence of new parties and strengthening the cohesion of the established ones. In addition, medium parties are often under the threat of failing to overcome the threshold."

However, in the forthcoming elections the threshold is not likely to play a major role, Dr. Chiocchetti said. According to the opinion polls, Die Linke, Free Democratic Party (FDP), AfD and the Greens are all polling between eight and 11 percent and will comfortably qualify for representation, he added.

The most likely option for the next German government is a renewed 'grand coalition' between Angela Merkel's Christian Democrats (CDU) and Martin Schulz's Social Democrats (SPD), Dr. Chiocchetti said.

However, other parliamentary majorities might become "mathematically and politically possible," he explained. These included a CDU-FDP coalition or what is known as a "Jamaica coalition". It gets its name because the colors of the coalition partners — the CDU, FDP and Greens — are synonymous with those of black, yellow and green of the Jamaican flag.

The Role of the Threshold

"To get a full representation in the German Bundestag, parties need to get at least five percent of the 'second vote' or win at least three constituency seats in the 'first vote'. In addition, individual candidates who won constituency seats can keep them even if their party failed to overcome the thresholds," explained Dr. Chiocchetti.

Despite these obstacles a few new parties have successfully gained representation over the last three decades: the Greens since 1983 and the Party of Democratic Socialism (PDS) since 1990, renamed Die Linke in 2007. They did it either by overcoming the threshold, or by winning at least three constituency seats, or by exploiting a special rule for Eastern Germany in 1990, he told Sputnik.

Mrs. Merkel has been Chancellor since 2005 when she took over from the SPD's Gerhard Schroder and if she wins on September 24 she is likely to overtook the longevity of her predecessor as CDU leader, Helmut Kohl, who was Chancellor for 16  years, between 1982 and 1998.