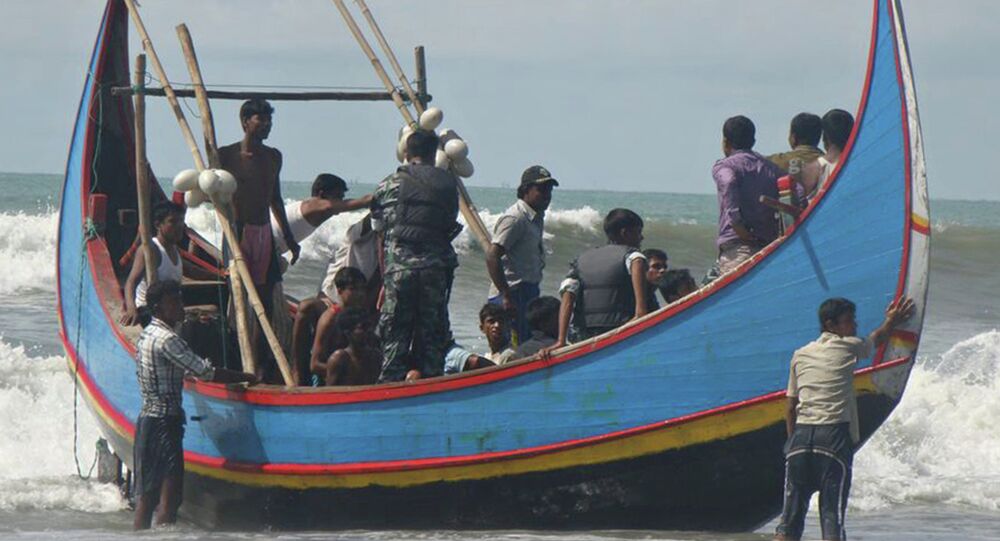 All You Need to Know About the Rohingya Crisis in Myanmar

The Rohingya conflict in Myanmar, which had caught its second wind in August 2017, appears to be a crisis long in the making: the conflict between the countries Buddhists and Muslims actually originates from the 19th century.

Sputnik decided to take a closer look at the history of the conflict; here is all you need to know about it:

1. The conflict intensified on August 25, 2017, when Muslim insurgents of Rohingya origin attacked security posts in Rakhine. It has gradually escalated since 2011, hitting its first peak in 2012 when thousands of Muslim families sought asylum in the special refugee camps on the country's territory, or fled to Bangladesh. Yet another escalation started in 2016.

2. The military response of the country's authorities triggered violent clashes, which claimed the lives of at least 402 people, including 370 militants, 15 policemen and 17 peaceful civilians. The Denmark-based European Rohingya Council (ERC) reported that between 2,000 and 3,000 Muslims were killed in Rakhine.

3. More than 18,000 Rohingya refugees have fled to Bangladesh since ethnic clashes flared up in Rakhine state, according to the International Organization for Migration (IOM).

4. Hundreds of people protesting against ethnic violence gathered for a rally in front of the Myanmar Embassy in Moscow on September 3 while thousands of protesters took to the streets in the Chechen capital of Grozny on September 4. Several hundred Muslim women took part in demonstrations against the persecution of the Rohingyas outside Myanmar's Embassy in Indonesia. The protests also took place in Malaysia, Turkey, Australia and other countries.

5. The conflict between Myanmar's Buddhists and Muslims started about a century ago. Myanmar's Buddhists view the Rohingya minority as newcomers and outcasts. According to Burmese historians, the ethnonym "Rohingya" which originates in the name of the state of Rakhine, was created in the 1950s to give weight to the Muslim minority's claim to the territory of Myanmar's western state.  The historians say that the Rohingyas started relocating from Bengal to the western state of Rakhine in the 19th century, under the supervision of Britain's colonial authorities, which used the Rohingyas as cheap labor.

6. Regardless of repeated attempts to naturalize in Myanmar, the Rohingyas remain the most persecuted social group in the country: according to the Burmese citizenship law of 1982, the Rohingyas, who approximately comprise 1.6 percent of the country's population, are not being recognized as the country's civilians, thus remaining deprived of all civil rights including the right to receive medical care and education.

© AP Photo / Todd Pitman
In this Friday, March 17, 2017, image made from video, people who identify themselves as Rohingya, walk at the Dar Paing camp, north of Sittwe, Rakhine state, Myanmar. More than 120,000 Rohingya were forced into camps five years ago, and their suffering may have only worsened since Nobel Peace laureate Aung San Suu Kyi rose to power in Myanmar last year.

7. To complicate matters further, the Rohingya separatist movement that sought to join Pakistan gained momentum in the 1940s. As a result, the Muslim-inhabited territories in the northern part of Rakhine state turned into a foothold of religious extremists who had championed secession from Burma (Myanmar), joining East Pakistan (Bangladesh) since 1947.

8. Following the declaration of Burma's independence in 1948, the country's authorities introduced martial law in the region.

9. By 1961, the Burmese Army had suppressed most of the mujahedeen in Rakhine, but after the creation of the extremist Rohingya Liberation Party (RLP) in 1972 and the Rohingya Patriotic Front (RPF) in 1974 the guerrilla war broke out with renewed vigor.

© AP Photo / Esther Htusan
In this Friday, July 14, 2017 photo, Myanmar Border Guard Police (BGP) officers walk along a path ahead of journalists in Tin May village, in which Myanmar government and military claim the existence of Muslim terrorists in Buthidaung, Rakhine State, Myanmar.

10. As a result of the Burmese military Operation King Dragon (Operation Nagamin) in 1978 against Islamic extremists in the region, up to 250,000 Rohingyas fled to Bangladesh, escaping turmoil and violent clashes.

11. In the 1990s and 2000s, Rohingya extremists continued their rapprochement with al-Qaeda, which trained mujahedeens from Myanmar at their hidden bases in Afghanistan. In the beginning of 2010s, the Arakan Liberation Army, a Rakhine insurgent group founded in 1968, intensified its military activities in the region, claiming of being supported by private donors from Saudi Arabia and Pakistan.