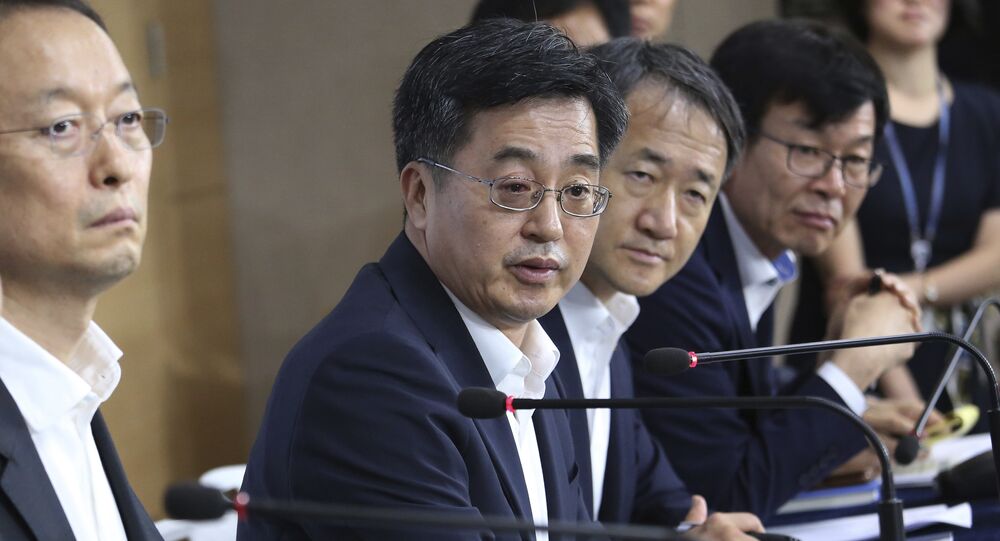 The new South Korean administration is planning to expand economic ties with a number of states, including Russia.

VLADIVOSTOK (Russia) (Sputnik) — The new South Korean administration is planning to enhance the country's economic ties with a number of states to the north, such as China, Mongolia as well as with the Far Eastern regions of Russia, the South Korean deputy prime minister said Monday.

"The new South Korean administration is planning now to actively promote a new policy on economic cooperation in the northern direction. Widening economic, person-to-person and trade ties especially with the Far East, as well as with China and Mongolia," Kim Dong-yeon said during the 16th session of the Russian-South Korean joint commission on economic, scientific and technological cooperation.

The official, who is also South Korea's minister of strategy and finance, added that new opportunities were opened up after the new administration came to power in Seoul.

© Sputnik / Alexander Kryazhev
Russia Expects North Korean Reps to Attend Eastern Economic Forum After Latest Nuke Test
"The Russian government is actively implementing its new eastern policy. That's why we can say that we have a common goal to explore and to develop Russia's Far East," the deputy prime minister said.

"I highly appreciate and have a positive view on the investment attractiveness of the Far East. Of course, we had only good results on investments to the Far East, but I expect that they would be better in future," Kim said.

According to the South Korean official, the representatives of his country are interested in investments in Russia's Far East.

"The [South] Korean government and companies show major interest in the development of the Far East and I hope that we will see the growth of investments," Kim added.

The official added that the markets of South Korea had not been affected by the recent missile launch carried out by North Korea, because of the stable situation in Seoul's economy.

"Despite the problems stemming from the recent North Korean launch, it has not had a significant impact on [South] Korea's market situation. Such situation takes place, because the basis of the [South] Korean economy is very stable and because the Korean government manages the external risks in a very effective way," Kim told reporters after the 16th session of the Russian-South Korean joint commission on economic, scientific and technological cooperation in the Russian city of Vladivostok.

Seoul was ready to respond to any potential scenarios, but it was too early to implement more tough measures to influence markets, Kim Dong-yeon said.

© AFP 2020 / Raul ARBOLEDA
Seoul, Washington Discuss Deployment of US Strategic Bombers in South Korea
"We consider that the North Korean nuclear tests in the short-run would affect [South] Korea's economy," the official said, adding that Seoul would take measures to stabilize markets if necessary.

The tensions on the Korean peninsula have escalated in recent months due to a series of missile launches and nuclear tests conducted by Pyongyang in violation of UN Security Council resolutions.