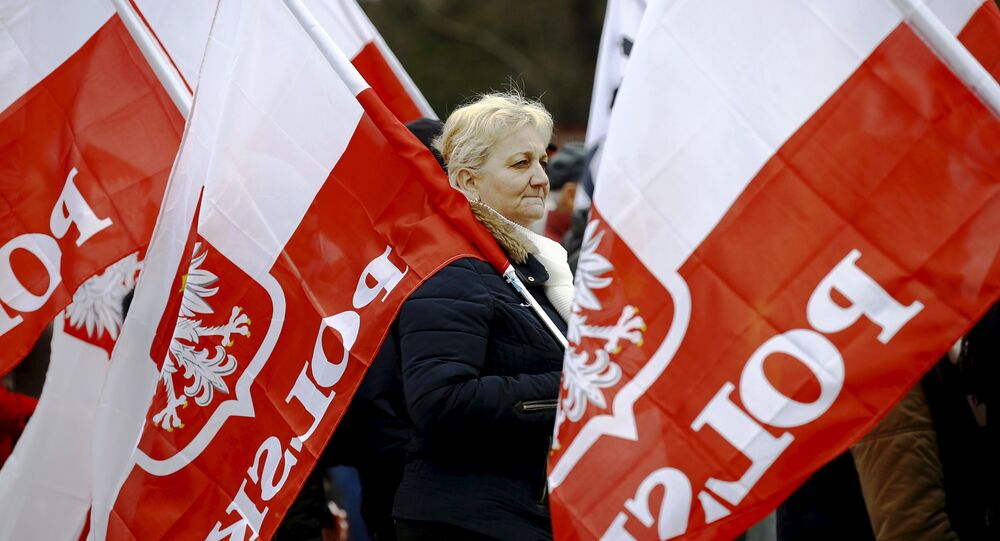 Russian Foreign Minister Sergei Lavrov has blasted the Polish government for inculcating anti-Russian attitudes among the population. Speaking to Sputnik, political observer Eduard Popov said that while Warsaw regularly uses Russophobia for political reasons, there's no evidence to suggest that Poles have a sort of natural hostility toward Russia.

Speaking to students and teachers at the Moscow State Institute of International Relations on Friday, the Russian foreign minister lamented that the Polish public is being "brainwashed" into holding "unequivocally anti-Russian" attitudes.

"I see here an obsession with creating an atmosphere of total resentment by society of anything related to Russia," the diplomat said, answering a question about the reasons behind Warsaw's anti-Russian policy, including the recent decision to demolish hundreds of Soviet-era war monuments.

© AP Photo / Alik Keplicz
Polish Opposition Expects Go-Ahead for Tough EU Sanctions Following Merkel-Juncker Meeting
According to Lavrov, Poland's Russophobia is being whipped up by people who "diligently" rewrite history, who are working to revise Polish nationalism based on ideals of superiority over others, and who would like to "pin the blame for all of Poland's misfortunes on [Russia]."

This includes Warsaw's claim that the Molotov-Ribbentrop Pact was the real reason behind World War II, the diplomat said. In Lavrov's view, by focusing on the Nazi-Soviet non-aggression pact, Polish leaders seem to forget that "at the time of the Munich Conspiracy, when Czechoslovakia was divided up, Poland quietly took for itself a very tasty morsel."

"The fact that this was a very serious impetus for creating potential for conflict in Europe is something Poland prefers not to speak about, just as it prefers not to mention that long before the Molotov-Ribbentrop Pact, Great Britain and France concluded their own, similar treaty with Nazi Germany," Lavrov emphasized.

© AP Photo
Molotov-Ribbentrop Pact: 'Soviets Had No Illusions About Nazi Intentions'
Ultimately, the senior diplomat noted that in this environment of hostility, even elementary communication and diplomacy is difficult.

Asked to comment on Lavrov's remarks, Eduard Popov, a Moscow-based political analyst whose areas of expertise include Russian-Polish relations, said that the idea of Poles' naturally-occurring anti-Russian sentiment is really only one part of the equation.

"Poland's anti-Russian traditions have a long history," the observer said, speaking to Radio Sputnik. "Here we can recall the three divisions of the Polish-Lithuanian Commonwealth," in which Russia took part, "the subsequent participation of the Poles in aggression against Russia on the side of the Napoleonic armies, and so on and so forth."

The analyst drew attention to Lavrov's choice of words in saying that Poles were being "brainwashed." This was true, he said, noting that to some extent, anti-Russian views really are being artificially inculcated among the Polish public.

"Polish Russophobia, even though it has its historical roots, is something that is sufficiently engineered, something artificially imposed on Polish society. I recently spoke to representatives in the Polish opposition, and was told the following fact: about 70% of Polish media is controlled by German media structures, while the remaining 30% is controlled by Americans. Do we really need any more evidence that Polish public opinion is being formed along a deliberately anti-Russian slant?"

© Sputnik / Alexei Druzhinin
Polish & NATO Hysteria Over Zapad-2017 Drills 'Really Just Shameless Cash Grab'
Ultimately, Popov said that he was optimistic, and that it wasn't worth getting hung up exclusively on the negative aspects of Russian-Polish relations.

"We must remember that along with official diplomacy there is unofficial diplomacy – people's diplomacy. Not all Poles adhere to the anti-Russian perspective being imposed on them. This is something that manifests itself in personal communication. According to polls, about 35% of Poles have positive attitudes toward Russia. This is a very important factor on which to build the foundation of future relations between Russia and a Poland that's free and independent of the West," Popov concluded.