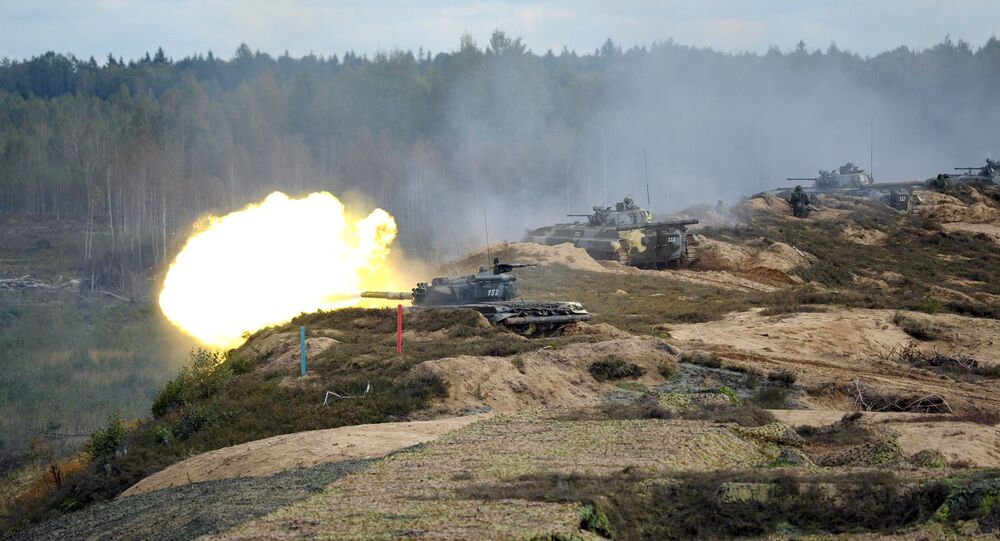 Next month's joint Russian-Belarusian Zapad-2017 exercises have prompted hysteria from Polish officials and media, which have described the 'dangerous' drills as 'the largest since the end of the Cold War'. Speaking to Sputnik, Vice Admiral (ret.) Marek Toczek and independent analyst Konrad Rekas explained the real motives behind the fearmongering.

In anticipation of next month's Zapad-2017 military exercises, Polish officials and media have joined officials from the Baltic states, Ukraine and elsewhere in condemning the joint Russian-Belarusian drills. Last week, Polish Foreign Minister Witold Waszczykowski warned that the "excessive" drills may cause "dangerous military incidents."

The Polish Defense Ministry has announced the closure of the airspace over the Polish-Belarusian border to civilian aviation. NATO general secretary Jens Stoltenberg has paid a visit to Warsaw, sending 'signals' to Moscow about the alliance's commitment to Poland. Polish media have been most outspoken, falsely claiming that these were the largest drills since the end of the Cold War, and ratcheting up fears of Russia being on the brink of an all-out invasion of Eastern Europe.

In reality, Toczek stressed, "what the Russians do with their allies on their own territory is their decision and their sovereign right. The same applies to the Poles and their allies; we never consider all the psychological aspects of the possible reaction of neighboring states."

Moreover, according to the officer, because few people have accurate information about the Russian-Belarusian drills' real scale and purpose, many are susceptible to such manipulation, which in turn helps to keep the prospects for improving relations poor.

Amid media fears that the Zapad-2017 drills 'would not be transparent', NATO officials said Wednesday that the alliance will be sending its own experts to observe them, as agreed following an official invitation from Minsk and Moscow.

In this light, Toczek noted that NATO's phony 'concern' over the drills, along with media claims that 'the Russians are on the brink of an invasion' were simply ridiculous.

"Representatives of our country's Defense Ministry have actively joined in with such rhetoric, even though every country has the sovereign right to organize various projects, including in the field of defense, on a scale that it deems to be appropriate. International legal norms are being observed; all organizations and states interested in observing exercises have been invited. There are no grounds for expressing any protest," the officer emphasized.

Ultimately, Vice Admiral Toczek advised politicians from both sides to create the conditions where such drills could be directed more toward regional cooperation than toward confrontation. "Today there are no conflicts in our region; there is no need to prepare for any possible military actions…As I've said, what we're seeing now are political games, meant not to calm emotions, but to preserve this completely unreasonable tension."

© Sputnik / V. Kiselev
NATO to Send Experts to Russia-Belarus Zapad-2017 Drills After Invitation
For his part, independent Polish analyst Konrad Rekas told Sputnik Polska that the hysteria surrounding the Zapad-2017 drills was little more than a ploy by NATO's Western allies to squeeze more defense spending out of Poland.

As far as Stoltenberg's Warsaw visit was concerned, Rekas explained that although Poland's US allies aren't looking to start a hot war in Europe, they are seeking to pressure the continent into paying more for NATO defense. "Hence Stoltenberg's visit, which was meant to praise the Poles, to pat us on the back for our 2% of GDP defense spending [commitments], and for our purchase of unneeded military equipment."

According to the observer, both Polish and Lithuanian hawks "would willingly start a real war; they would gladly bring the international situation to a dangerous level. The West's behavior," on the other hand, "is more a cynical game, selling us unnecessary US equipment that's growing stale in warehouses."

Rekas noted that unfortunately, the US can count on the fact that "there will always be someone in Warsaw, Vilnius or Bucharest who will buy this equipment" from their modest national budgets. "In the end, we are dealing with players who are crazy on the one hand, and cynical on the other."

Asked about the difference between Zapad-2017 and last year's Anaconda-2016 drills, Rekas said the main difference was that the NATO drills were two times larger.

"One should not succumb to Lithuanian propaganda," the analyst stressed. "Lithuanian President Dalia Grybauskaite sees [Russian] 'little green men' even in her sugar bowl, and willingly talks about this with [Polish Defense Minister Antoni] Macierewicz and [Foreign Minister] Waszczykowski. We shouldn't exaggerate. The exercises, conducted in accordance with all OSCE standards and with the participation of foreign observers, including from Lithuania…are quite ordinary."

© Sputnik / Igor Zarembo
Belarus MoD Mocks Remarks on Anti-Kiev Aggression Amid Zapad-2017 Drills With Russia
Finally, Rekas suggested that when officials from Poland or NATO become anxious over the presence of large Russian military forces on NATO's borders, they "should ask themselves: were NATO's borders not moved? Maybe the root of the problem is the fact that, in spite of international agreements taken on by the alliance in the 1990s, it has expanded beyond any sort of security limits. The organization is not a defensive one, since it has yet to protect anyone. Rather, it is an aggressive alliance, is based on an aggressive military doctrine, and engages in the bombing other countries for God knows what crimes."

Ultimately, the analyst suggested that Belarusian President Alexander Lukashenko's decision to allow the Zapad-2017 drill to be held on Belarusian territory was a bold move, given that "Belarus has been and will continue to be under enormous pressure from the West, including Poland, who seek to overthrow him…They want to organize a new Maidan and to carry out experiments similar to the ones which have already destroyed Ukraine."

"Therefore, it will be good if Belarus's army trains up a little. Perhaps this will help cool some heads in Vilnius, Warsaw and Washington," Rekas concluded.

The Zapad-2017 drills will take place between September 14-20 in Belarus and Russia's Kaliningrad region, and will involve around 12,700 servicemen, about 70 aircraft, 680 pieces of military equipment, and up to 10 ships. Observers from Ukraine, Poland, the Baltic countries, Sweden and Norway have been invited to observe the drills, as have officials from the United Nations, the Organization for Security and Cooperation in Europe, NATO, the Collective Security Treaty Organization, the Commonwealth of Independent States, and the International Committee of the Red Cross.