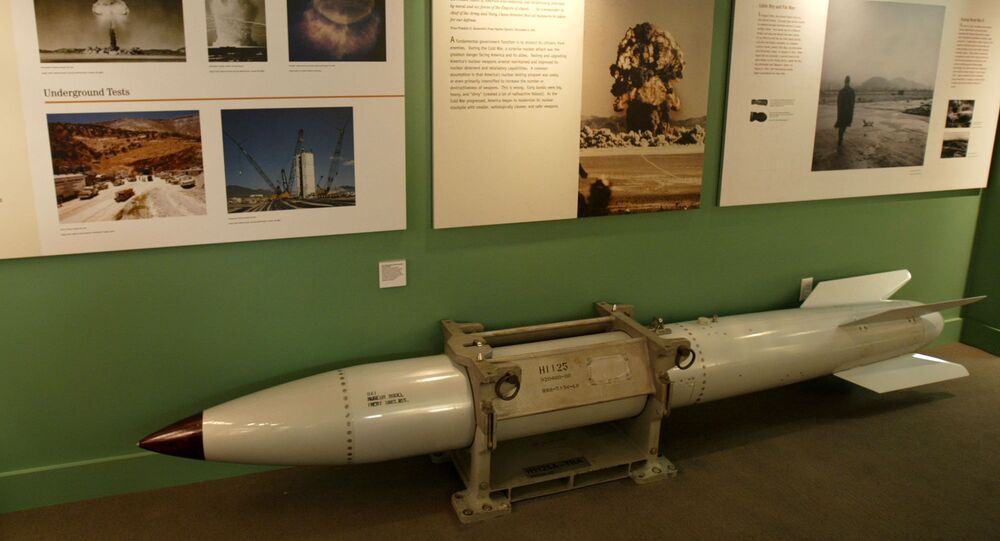 The second qualification test of the B61-12 bomb conducted on August 8 came as a "signal" to Russia, American nuclear expert Dr. Hans Kristensen told Radio Sputnik. According to the academic, the US nuclear program is nothing but part of a broader effort by global powers to modernize their nuclear stockpiles.

The recent tests of the B61-12 gravity bomb, conducted by the National Nuclear Security Administration and the US Air Force on August 8, have sent a signal to Moscow, professor Hans Kristensen, director of the Nuclear Information Project at the Federation of American Scientists, told Radio Sputnik.

The expert pointed out that the nuclear explosive power of the modernized B61-12 bomb is the same as that of its predecessor — B61, which is considered one of the main pillars of the US Air Force's nuclear arsenal.

© CC0
'Americans Preparing for War': Why US Testing B61-12 Nuclear Bomb
However, the modern tail-kit, with a substantial reduction in yield, provides the B61-12 with greater accuracy, Kristensen remarked. Yet another important innovation, according to the expert, is that the bomb can be mounted on the Lockheed Martin F-35 Lightning II stealth aircraft, which reportedly has "better penetration capabilities."

More importantly, the modified bombs are due to replace the US-owned nuclear B61 atomic weapons stationed in Europe.

Kristensen highlighted that the new nuclear arms will go to the exact same locations where obsolete bombs are now: "It's not like they are deploying them [B61-12 bombs] in other places or further east or something like that."

According to the expert, the latest US B61-12 tests come as part of broader nuclear modernization kicked off by major geopolitical players.

From time to time each of the players "comes in with a new system or upgraded system," Kristensen said, stressing that "upgrades happen all the time, but at different intervals in different countries."

"And now we see North Korea making enormous progress in trying to develop something," the expert pointed out. "So these are important developments that are happening continuously and for some reason don't seem to ever stop."

© CC0
US Tests Delivery of B61-12 Nuclear Bomb From F-15 Over Nevada
On August 29 the National Nuclear Security Administration (NNSA) announced successful flight tests of its B61-12 gravity bombs without nuclear warheads. The qualification tests were conducted on August 8 at the Tonopah Test Range in Nevada. The bombs were dropped from F-15E fighter jets.

The NNSA specified in its official statement that the "tests are part of a series over the next three years to qualify the B61-12 for service." The first qualification flight test was conducted in March 2017.

It is expected that besides F-35 joint strike fighters the modified atomic bombs would be mounted on B2A and B21 bombers, as well as on F16C/D, F16 MLU and PA-200 aircraft.

The information about the successful B61-12 test came simultaneously with the Tuesday ballistic missile launch in the direction of Japan by North Korea.