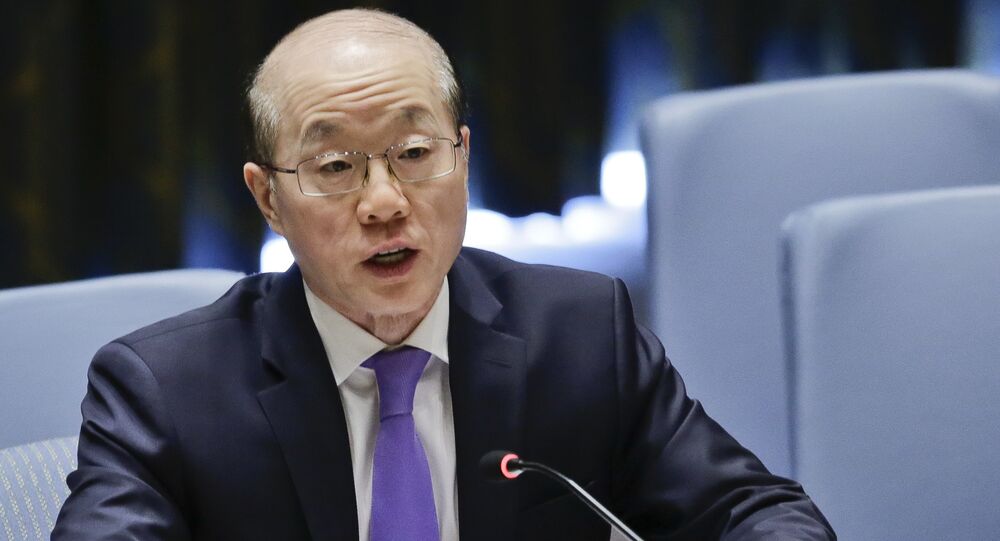 Chinese Ambassador to the United Nations Liu Jieyi on Wednesday called for halting the Terminal High Altitude Area Defense (THAAD) systems deployment on the Korean Peninsula for the settlement of the crisis in the region.

© AP Photo / U.S. Force Korea
Four Extra THAAD Launchers May Be Deployed in South Korea Soon
MOSCOW (Sputnik) — "China stands opposed to any chaos or war on the [Korean] peninsula. Enhancing military deployment on the peninsula will not help towards achieving the goal of denuclearization or regional stability. The deployment of the THAAD system in Northeast Asia severely jeopardizes regional-strategic balance, undermining the strategic security interests of all regional countries, including China. It will further escalate tension on the peninsula, making the issue more complicated and intractable. China also urges the relevant parties to halt its deployment process and dismantle related facilities immediately," Liu said at the United Nations Security Council Session (UNSC) meeting related to Tuesday's ballistic missile launch by North Korea.

On Tuesday, Pyongyang test fired intermediate-range ballistic missile which had flown 1,677 miles over Japan before falling into the Pacific Ocean east of the Japanese northern Hokkaido island. According to media reports, the launch had been held in defiance of the ongoing US-South Korean Ulchi Freedom Guardian military drills repeatedly criticized by the North as a rehearsal for war on the peninsula.

In July 2016, Washington and Seoul reached an agreement on placing a US THAAD system in South Korean territory. In early March the THAAD deployment began in response to North Korea’s ballistic missile tests. After July's missile tests by Pyongyang, South Korean Presidential National Security Office said the deployment of additional launchers for THAAD had been considered.