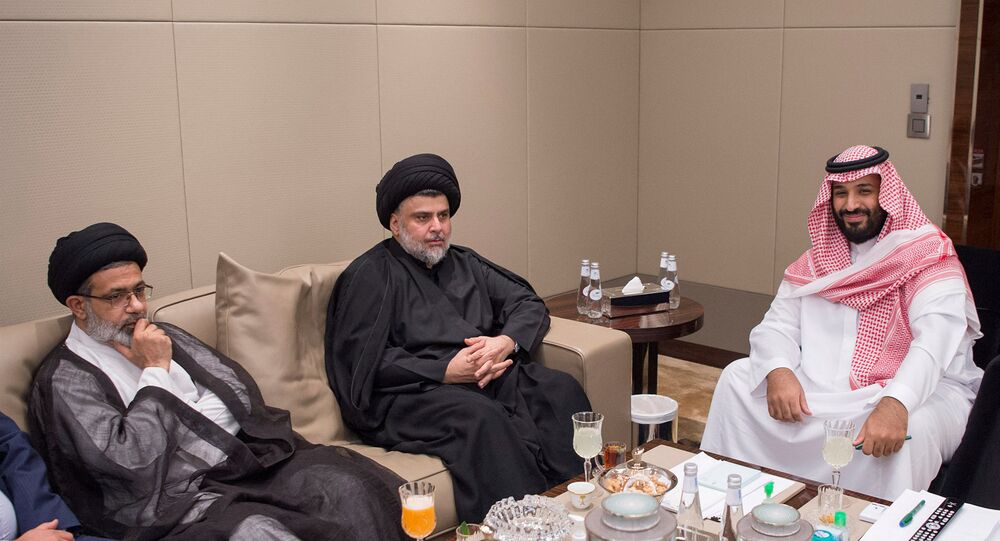 Why Saudi Crown Prince Seeking to Warm Up Relations With Iraq

Saudi Crown Prince Mohammad bin Salman's assertive foreign strategy has yet to bring any positive results, RIA Novosti contributor Gevorg Mirzayan notes, adding that the crown prince's failures play into the hands of his political opponents. However, according to Mirzayan, there is a silver lining for the prince.

Not everything is rosy in the garden of Saudi Crown Prince Mohammad bin Salman, Gevorg Mirzayan writes: his Yemeni military adventure has seemingly turned into a "quagmire" for Riyadh, while the Saudi-backed Syrian opposition has lost its momentum. Likewise, the crown prince-led effort to punish Qatar has also not borne the desired outcome so far.

The situation is further complicated by the fact that Mohammad bin Salman, was declared the heir to the crown against the wishes of many of his powerful relatives, Mirzayan, associate professor at the Department of Political Sciences at the Finance University of the Russian Government, remarks.

© Fotolia / marrakeshh
'Pipeline Going Into the Med' via Syria Possible Cause for Saudi Thaw With Iraq
In this context, the crown prince's foreign policy failures could play directly into the hands of his opponents.

Currently, Crown Prince Mohammad holds the positions of first deputy prime minister and minister of defense of Saudi Arabia and is regarded as the most influential young politician in the country.

However, there is a silver lining for the Saudi Crown Prince's foreign strategy, the academic noted, referring to Mohammad bin Salman's initiative to build bridges with predominantly Shiite Iraq.

"The Saudis are actively working in Iraqi Kurdistan and have never concealed the fact that they are giving money to Baghdad to confront Daesh [ISIS/ISIL]," Anton Mardasov, an expert on Middle Eastern affairs at the Russian International Affairs Council (RIAC) says, as quoted by Mirzayan.

On June 19, Iraqi Prime Minister Haider al-Abadi visited Riyadh where he met with King Salman and agreed to establish a "coordination council to upgrade relations to the hoped for strategic level and open new horizons for cooperation in different fields," as the official Saudi Press Agency said.

In addition, last week Saudi local media reported Iraq and Saudi Arabia were allegedly planning to open the Arar border for trade for the first time in nearly 30 years.

This agreement followed the Saudi cabinet announcement on August 14 that the Saudi monarchy and the Iraqi republic would be establishing a joint trade commission.

What lies behind Riyadh's initiative to warm up Saudi-Iraqi relations?

The answer is simple, Mirzayan says: by boosting Saudi-Iraqi cooperation the kingdom hopes to significantly limit Tehran's influence in the region.

"However, a real breakthrough for Riyadh's Iraqi policy was the visit of Muqtada al-Sadr, one of the most influential Shiite leaders of Iraq, to the kingdom's capital," the academic underscored.

© REUTERS
Saudi Arabia, Iraq to Reopen Border Crossing That’s Been Closed for 27 Years
Mirzayan explained that within the Iraqi Shiite community the views on the development of relations with Iran differ. While middle-class Shiites from large cities and the Iraqi capital of Baghdad are praising the Iraq-Iranian rapprochement, the Arab nationalists of southern Iraq still remember the devastating Iran-Iraq war of 1980-1988. The academic highlighted that it seems that al-Sadr belongs to the latter group.

Needless to say, al-Sadr's visit to Riyadh caught the headlines and provoked a heated debate among Arab observers.

"The very fact that al-Sadr met with Mohammad bin Salman (who is responsible for the domestic, foreign policy and economic policy of the kingdom), as well as their joint photographs caused a furor in the Arab world," Mardasov said, as quoted by the academic.

More importantly, however, is that the two struck a number of important agreements. For instance, the crown prince vowed not to meddle in the internal affairs of Iraq and to provide the country with $10 million to restore the economy. Mohammed bin Salman also promised to mull over investment projects for southern Shiite regions of the country.

However, according to unofficial data, the parties could have also talked about the Saudi financial support to al-Sadr and his political ambitions, Mirzayan added, citing the fact that Iraq is preparing for 2018 provincial and parliamentary elections.

"If [Saudi Arabia] bets on al-Sadr and he really helps [the kingdom] to reduce Iran's influence in southern Iraq and succeeds in this, Saudi Arabia will be able to 'avenge' both the defeat in Syria and the expected defeat in Yemen; for his part, Crown Prince Mohammed will dramatically strengthen his prospects to keep the throne after his father's death," the academic concluded.