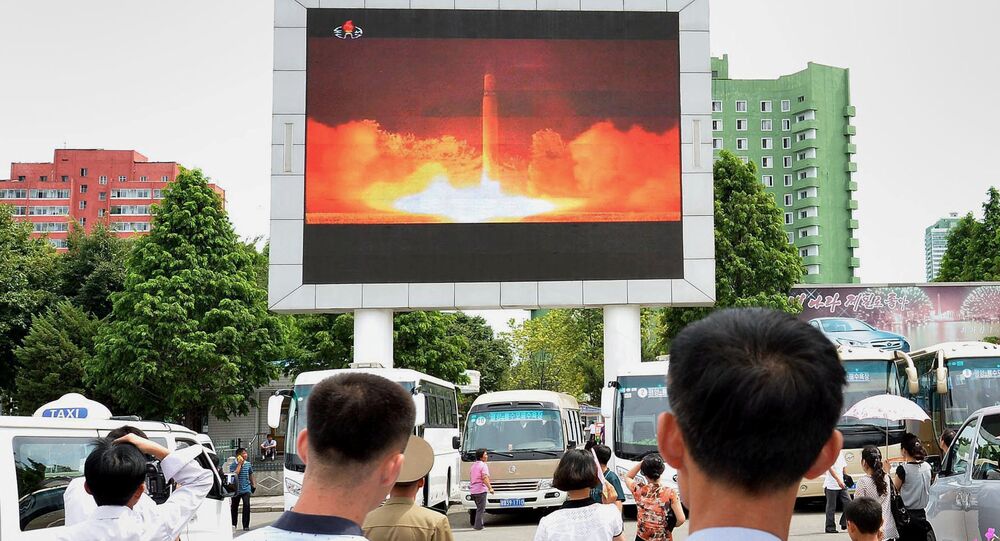 Russian Foreign Minister Sergey Lavrov said Wednesday that Moscow noted that the heated rhetoric over the Korean crisis has cooled down recently, allowing for the possibility to solve the conflict in a peaceful way.

MOSCOW (Sputnik) — Russia hopes the rhetoric of mutual threats from the leadership in the United States and North Korea has cooled down, Lavrov said at a press conference.

"We are noting that this rhetoric has quieted down recently, and it is probably to be hoped that the hot heads have cooled down," the minister noted.

US President Donald Trump warned Pyongyang earlier in July of "fire and fury" if it doesn't stop its provocations. North Korea then said it was considering a missile attack near the US Pacific territory of Guam. However, after weeks of posturing, North Korean leader Kim Jong Un has pulled back on his threat to test fire ballistic missiles off the coast of Guam.

© AP Photo / Ahn Young-oon
Why China's Influence on North Korea Amid Escalation With US 'Overestimated'
The tensions between Washington and Pyongyang got to the critical point after UN Security Council had passed new sanctions against North Korea, the harshest to the date. The sanctions could cut the nation’s annual export revenue by $1 billion, or an estimated one-third of its annual foreign exchange earnings.

Speaking of the sanctions, Lavrov said that Russia will not support moves that would "suffocate" the North Korean economy and lead to dire humanitarian consequences.

"We cannot support the ideas that some of our partners continue to nourish and that are aimed literally at the economic suffocation of North Korea with all the negative, tragic humanitarian consequences for the North Korean citizens," Lavrov said, noting that the possibilities for economic pressure on North Korea have almost been "exhausted."