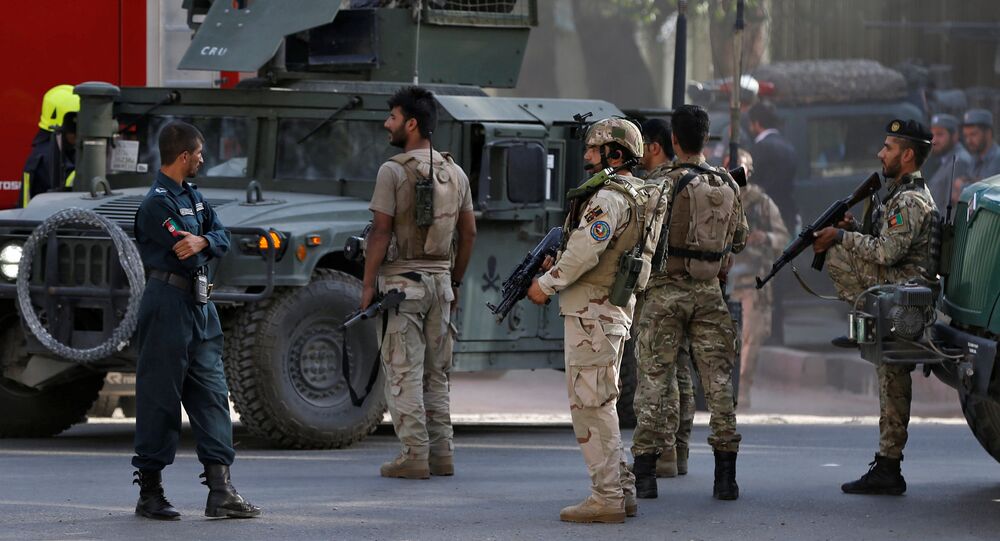 Despite efforts by the Afghan government and the US, Daesh (ISIS/ISIL) and the Taliban continue to gain ground in the country, threatening to import terrorism to the Central Asian states. Speaking to Sputnik, Afghan military analyst Atiqullah Amarkhel shared his views on whether Russia will intervene to tackle the terror threat.

Zamir Kabulov, a high rank career diplomat and Russian presidential envoy to Afghanistan, has recently remarked that if the Afghan government and Washington are unable to counter the threat posed by Daesh's (ISIS/ISL) spread, Russia will resort to military force, Sputnik Afghanistan reported.

The Russian diplomat cited the fact that Daesh continues to strengthen its positions in Afghanistan, which triggers serious concerns in Moscow about the possibility of the spread of instability to the countries of Central Asia near Russia's borders.

Kabulov also referred to recent reports regarding the alleged delivery of weapons to Daesh extremists by unidentified helicopters.

According to the Russian Foreign Ministry, in at least three provinces in the north of the Islamic Republic of Afghanistan an unidentified aircraft was spotted dropping boxes for Daesh militants. Kabulov noted that the issue was raised by Russian diplomats at a UN Security Council meeting.

© AFP 2020 / STR
At Least 16 Civilians Killed by Mortar Shell in Afghanistan – Officials
The parliament of Afghanistan echoed the envoy's concerns. Some deputies even went so far as to suggest that the unidentified aircraft may be connected to the United States.

What then did Kabulov mean by referring to Russia's deployment of military force? Does it mean that Moscow is ready to bring in the military to Afghanistan in order to defeat Daesh?

According to an Afghan military analyst, retired Air Force General Atiqullah Amarkhel, the Russian official's statement is more of a "warning" over the potential escalation of the situation in Afghanistan, than a promise to use military force.

"It is a political issue and [Kabulov's] words are a diplomatic warning," Amarkhel explained, stressing that it is highly unlikely that Russia will intervene to fight Daesh in Afghanistan.

© AP Photo / Rahmat Gul
Chaos at US State Dept. 'Knee-Caps’ Efforts to End Afghanistan War - Report
"The Russian Federation will not take military measures until Daesh attacks the borders of six Central Asian states and Russia," the general pointed out. "The reason for Russia's concern over the growing influence of Daesh in Afghanistan, especially in the country's north, is the threat of the deterioration of the situation in Central Asia."

Thus, to tackle the problem the Russian Defense Ministry announced in June that it was going to reinforce its military bases in Tajikistan and Kyrgyzstan with modern weapons in order to prevent the import of terrorism from Afghanistan into Central Asia.

"We are alarmed by the growing presence in Afghanistan of Daesh militants whose number now exceeds 3,500. The terrorist group's ongoing effort to establish an Islamic caliphate poses a serious threat to the security of Afghanistan and its neighbors," Russian Defense Minister Sergei Shoigu said at a June meeting of the Shanghai Cooperation Organization (SCO) in the Kazakh capital Astana.

© Sputnik / Sergey Guneev
'Collective East': Why Russia is Reinforcing Its Military Bases in Central Asia
The Russian defense minister emphasized that the Russian military bases in Tajikistan and Kyrgyzstan are "guarantors of regional stability."

"Together with our allies we are boosting their combat capability which, in turn, ensures the security of [their capitals] Dushanbe and Bishkek," Shoigu stressed.

Citing political analysts, Amarkhel noted that Russia's military involvement in Afghanistan would created new challenges for Moscow. He referred to the fact that Russia is currently engaged in an aerial operation in Syria aimed at protecting the legitimate government of Bashar al-Assad.

Moscow has repeatedly voiced its willingness to provide political and technical-military assistance to Kabul, at the same time denying the possibility of the involvement of the Russian Armed Forces in any military actions on the ground in Afghanistan.

Speaking to Sputnik, General Amarkhel called attention to the fact that although the government of Afghanistan and its allies are trying to defeat Daesh, the organization is only getting stronger.

With the Taliban controlling most of Afghanistan's rural areas and Daesh consolidating its positions in the war-torn country the situation is steadily deteriorating.

"The war in Afghanistan is being expanded, in addition to the Taliban and Daesh, new terrorist groups have emerged [in the country]. Let's see how the situation will unfold," the general said.

"The relationship between Russia and the US is deteriorating day by day, so the US can use various groups of Islamists to increase pressure on the Russian Federation in order to worsen the situation in the Central Asian states, therefore, Russia is closely monitoring the situation," Amarkhel assumed.