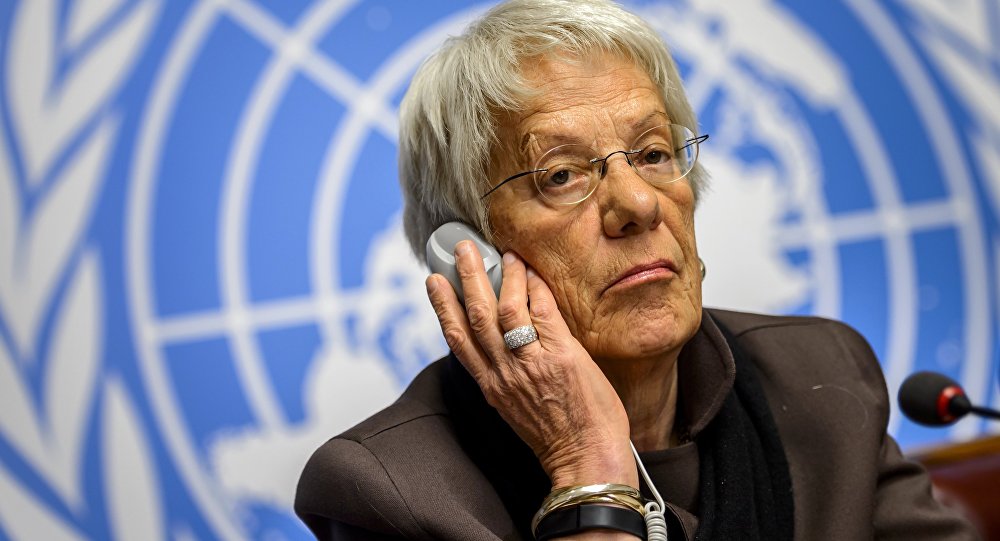 UN 'Not Finding Any Solutions' in Syria: US Is Making Bad Situation Worse

After seven years of documenting the atrocities of the Syrian conflict, senior war crimes prosecutor Clara Del Ponte resigned from the Independent International Commission of Inquiry on the Syrian Arab Republic, after seeing no movement from the UN Security Council to help the Syrian people.

Radio Sputnik’s Loud and Clear spoke with Alberto Garcia Watson, former senior Middle East correspondent for HispanTV, about Del Ponte’s resignation and the progress being made by Syrian government forces pushing back the rebellious terrorist organizations.

​Watson explained that as head of the human rights commission during the Syrian conflict, Del Ponte had faced a lot of ups and downs. "We heard the narrative we heard in Libya, from March 2011 we heard that [Syrian President Bashar] al-Assad was allegedly bombing and killing his people. We heard the same about [deceased Libyan leader Muammar] Gaddafi in Libya, we hear now the same thing about [Nicolas] Maduro in Venezuela."

The conflict "is being won by Syrian forces with the help of the Russians, and not much more, because to be honest the American intervention is making more of a mess," he said. To illustrate, Watson pointed to the use of white phosphorus munitions by US forces during a June operation in the Daesh stronghold of Raqqa, which killed 30 civilians.

The journalist told Loud & Clear that Del Ponte resigned because she was "absolutely exhausted" after eventually seeing that "the United Nations is playing a role that is not finding any solutions in this conflict."

Sputnik news analyst Walter Smolarek, sitting in for host Brian Becker, offered that the white phosphorus incident "undercuts one of the key narratives that we’ve seen in the Western media and coming from Western capitalists over the course of this war, which is the narrative of 'The people versus the evil dictator.'"

He added that another narrative typically used to justify US intervention in Syria is the dynamic of "moderate rebels" versus "extremists," and asked Watson if this was a real dynamic or an invention of the West.

"I’ve been to Syria several times, and when you talk to the Syrians about moderate rebels and extremist rebels, they laugh. They laugh because there’s no such thing as moderate rebels," Watson replied.

He highlighted an incident from 2013 where a commander from the Free Syrian Army, funded and trained by the US, cut the heart out of a Syrian soldier and ate it on camera. There was another incident the same year in which FSA soldiers shot down a helicopter, decapitated the occupants and grilled their heads.

"This proves that most of the groups are extremists," Watson asserted. "It’s ridiculous to talk about moderate and extremists: at this point most of them are terrorists and mercenaries that have been brought into Syria for the interests of other nations, especially the gulf monarchies of Qatar and Saudi Arabia."

"No one has invited the United States in this conflict," he pointed out. "They should let the Syrians decide their future and let the Arab Syrian Army, which is the only legitimate army, to operate there."