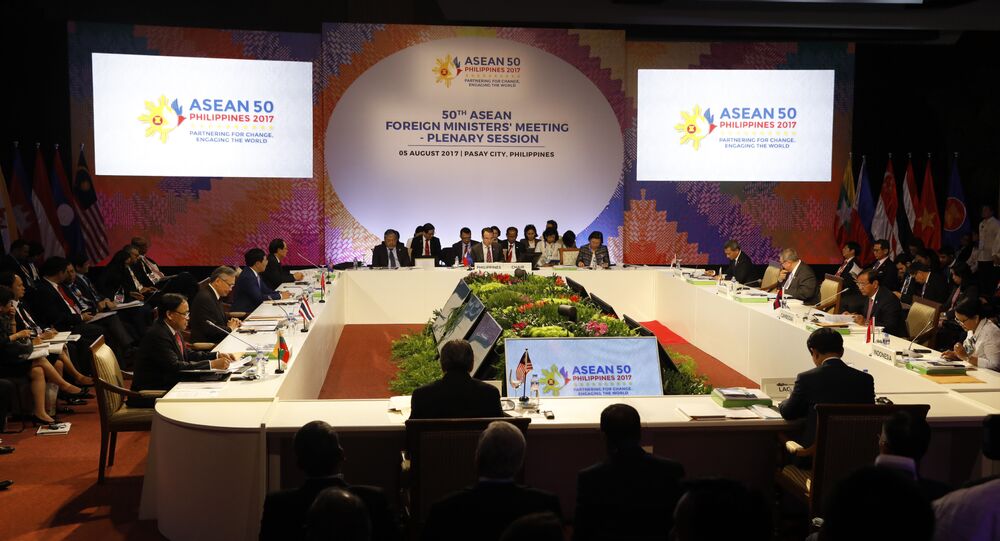 Manila is a place where you can see Asian, European and American traditions blend in one melting pot. For centuries, the Philippines has been famous for its international trade, for its hospitality and unique culture.

Foreign government officials, who gathered in Manila for the 50th ASEAN ministerial meetings, seem to have adapted themselves to these local multicultural traditions. Turkish Foreign Minister Mevlut Cavosoglu, who had a meeting with his Russian counterpart Sergey Lavrov on Sunday, greeted journalists in nearly flawless Russian.

© Sputnik / Vitaliy Belousov
ASEAN Proved Itself as 'Authoritative Regional Alliance' - Lavrov
Sergey Lavrov himself had a busy schedule on the first day of his trip to the Philippines. He discussed the upcoming Russia-Turkey-Iran meeting on de-escalation zones in Syria with his Turkish colleague. Lavrov also met with Chinese Foreign Minister Wang Yi to talk about preparations for the September BRICS summit, which will be held in Xiamen, in September, as well as about the situation on the Korean peninsula. Lavrov’s meeting with the US Secretary of State Rex Tillerson went on longer than expected; the officials discussed cybersecurity, sanctions, as well as the current conflicts in Syria, Afghanistan and the Persian Gulf.

On Monday, Lavrov is expected to meet with the head of European diplomacy Frederica Mogherini, as well as with top diplomats from Brunei, Philippines, New Zealand, Japan and Singapore.

The situation in the Philippines itself is quite tense. Armed forces have been battling with extremists affiliated with the Islamic State (Daesh) in the city of Marawi since May this year.

© AP Photo / Aaron Favila
ASEAN Summit: Demonizing Duterte Serves US Interventionist Policies
A heavy police presence can be felt in Manila as well. Some security restrictions enforced by the ASEAN meeting organizers are tougher than the usual protocols during similar forums, which were held in Vientiane, Laos, last year, or in Sochi, Russia, the year before. On Sunday, a Russian TV crew was prohibited from going live on air from the summit venue – the Philippines International Convention Center. However, other restrictions went far beyond security concerns, as several members of the Russian press pool were denied access to the venue for what the organizers claimed were “dress code violations.” Instead of wearing blue jeans, members of the press were told to wear chino pants.

Foreign ministers also had their share of dressing up in Manila. But unlike the unusual requirements for the press, this was a normal part of the informal “theatrics” of the annual ASEAN conference. On Sunday, heads of foreign delegations, including Russian Foreign minister Sergey Lavrov, arrived at the gala dinner wearing traditional Filipino Barong shirts.

Following his three-day stay in Manila, Sergey Lavrov will continue his Asian trip. The head of the Russian Foreign Ministry is planning to visit Indonesia and Thailand, where he’s expected to hold a series of bilateral meetings.