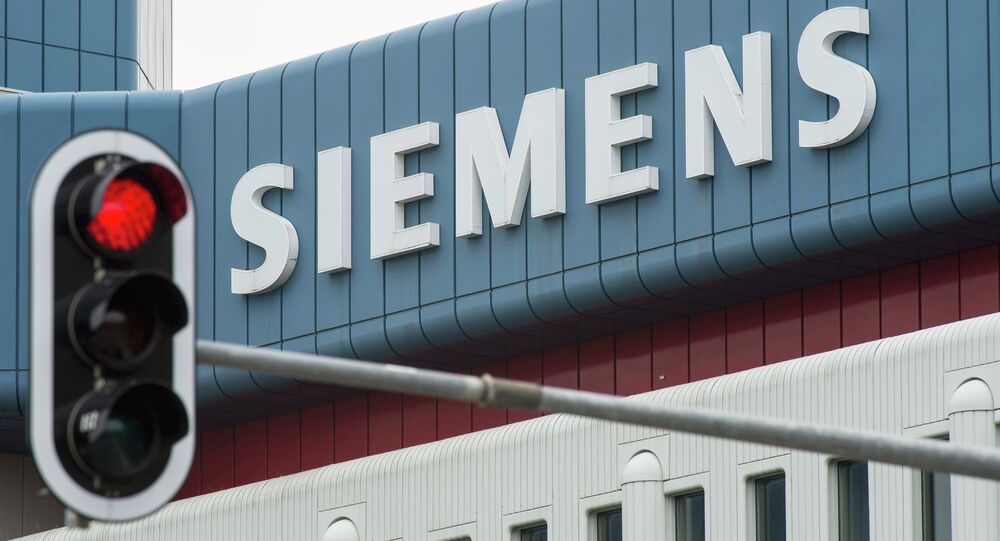 The EU has imposed additional sanctions on Moscow over a scandal surrounding the transfer of turbines supplied by German company Siemens to the Russian peninsula of Crimea in violation of previous Brussels' sanctions.

© REUTERS / Hannibal/Files
Russian Company on Siemens' Turbines Installed in Crimea: Russian 'Know-How Was Used' to Upgrade Them
The EU added three Russian nationals and three companies to its sanctions list over the issue. Russian Deputy Minister of Energy Andrey Cherezov and the head of the ministry's department, Evgeniy Grabchak, are added to the EU sanctions list.

Russia's OOO Technopromexport and OAO Technopromexport (latter now insolvent) companies that modernized the Siemens' turbines was also sanctioned by the EU; the firms' director general was also added to the expanded sanctions list. Moreover, the EU added Russian company Interavtomatika, which participated in the construiction of a power station in Crimea, to the sanctions list.

"The 3 persons have been added to the sanctions list for their responsibility in supplying Crimea with gas turbines from Russia. The turbines were originally sold by Siemens for use in the territory of the Russian Federation. The subsequent transfer of the turbines to Crimea was in breach of contractual provisions covering the original sale by Siemens. The companies placed under sanctions are the contracting party which purchased gas turbines and is responsible for the transfer, the current owner of the gas turbines, and a company specialising in control and communication systems for power plants, including in Sevastopol and Simferopol," a European Council statement said, adding that Brussels doesn't recognize Crimea as part of Russia.

The additonal EU sanctions include asset freezing and a travel ban, which will now apply to 153 individuals and 40 entities. These measures had been initially introduced in March 2014 and were extended for the last time in March 2017 until September 15, 2017.

"As part of its non-recognition policy, the Council has prohibited the supply of key equipment for infrastructure projects in Crimea and Sevastopol in important sectors, including gas turbines in the energy sector," the EU Council said.

© REUTERS / Michaela Rehle/File Photo
Kremlin Declines to Comment on Reports of EU Sanctions Expansion Over Siemens Scandal
In early July, Siemens created a task force team to investigate reports about the alleged transfer of turbines produced by Siemens Gas Turbines Technologies, a joint venture with the Russian Power Machines company, to the Crimean peninsula. On Friday, the company said that all four of its turbines intended for a project in Taman were illegally delivered to Crimea in violation of sanctions.

Late July, a source told Sputnik that Council of the European Union's Committee of Permanent Representatives (Coreper) agreed to expand the list of anti-Russian individual sanctions on the initiative of Berlin.

© REUTERS / Tobias Schwarz/File Photo
Berlin 'Had No Other Option' But to Call for Anti-Russia Sanctions Over Siemens Scandal
Commenting on the issue, Russia's Technopromexport (TPE) company, which is part of Rostec, said it purchased turbines for Crimean power plants in the secondary market, with Russian engineering companies modernizing them.

Crimea rejoined Russia in 2014 after almost 96 percent of its voters supported the move through a referendum held in March 2014. Kiev, as well as Brussels and Washington, did not recognize the referendum results. Russian authorities have repeatedly said that the Crimean residents decided to rejoin Russia in a democratic procedure and that the referendum was conducted in compliance with the international law.