Kyrgyz and Uzbek authorities continue active negotiations on boundary delimitation and demarcation, as the border line between the countries remains unsettled since the collapse of the Soviet Union, Kyrgyz government's press service said on Monday. 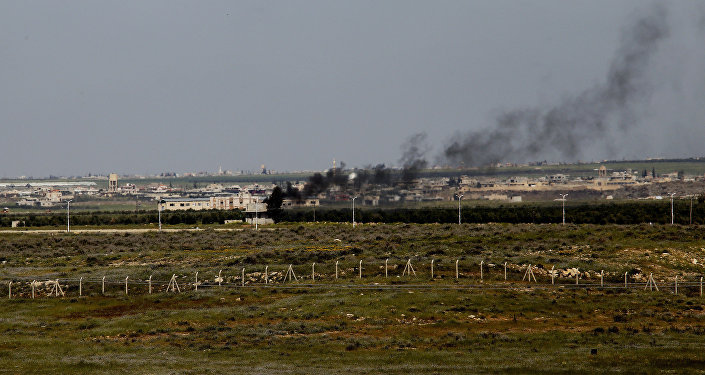 © AP Photo / Raad Adayleh
Russia in Talks With Kazakhstan, Kyrgyzstan to Send Servicemen to Syria - Senior Lawmaker
BISHKEK (Sputnik) — The Kyrgyz-Uzbek frontier has repeatedly become a center of clashes between local residents, sometimes leading to armed conflicts. After Shavkat Mirziyoyev took Uzbekistan's presidential office in 2016, the bilateral relations between the countries experienced a massive breakthrough. As of May 2017, Kyrgyzstan and Uzbekistan have agreed on around 1,055 kilometers (slightly over 650 miles), or 76.5 percent, of bilateral border line.

"Since the renewal of the talks, from August 2016 to July 31, 2017, a total of 14 governmental delegation task groups' meetings have been held, where the problems of boundary delimitation and demarcation have been discussed," the statement says.

According to the statement, the negotiation teams' heads Uzbek ambassador at large and adviser to the Uzbekistan's Minister of Interior Affairs Ilhom Nematov and Kyrgyz government special representative Kurbanbai Iskandarov have informed Kyrgyzstan's Prime Minister Sooronbai Zheenbekov on the talks process, particularly on the nine-day negotiations held in Bishkek between July 20 and 29.

"Overall, the meeting was held on a constructive basis and in a friendly atmosphere. Based on the results of the negotiations, we have signed a protocol and agreed upon holding another task group meeting on the territory of Uzbekistan," the press service added.

In June 2017, Kyrgyz and Uzbek presidents charged responsible authorities with the task of accelerating the work on signing the bilateral delimitation and demarcation agreement on the sidelines of Shanghai Cooperation Organization (SCO) meeting in Kazakhstan's capital city of Astana.

Uzbekistan to Host Joint Military Drills With Russia in October

We Warned You: Uzbekistan Says it Told West About Stockholm Attack Suspect