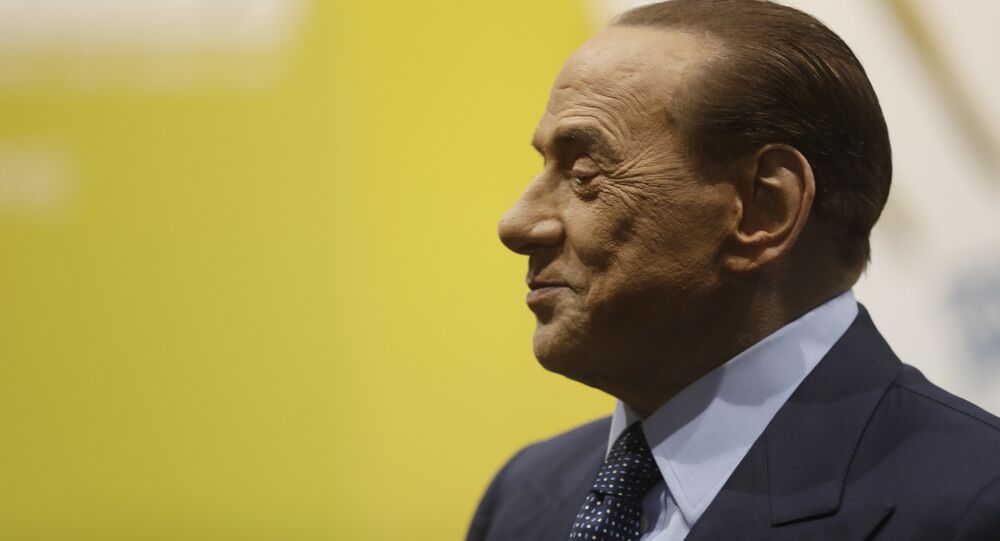 Silvio Berlusconi, the former media and football tycoon who was prime minister of Italy four times, is making a comeback. He might be 81 in September but the man who founded the Forza Italia party reckons he can cobble together a right-wing coalition to form a government.

© AP Photo / Alessandra Tarantino
Italian Right Scores Huge Election Victory, Plans to Scrap 'Idiotic Sanctions'
While some may consider him a controversial figure because of his bunga bunga sex scandals, his perma tan and dyed hair, he remains a powerful force in Italian politics.

Last month voters across Italy went to the polls for the second round of mayoral elections and right-wing parties like Lega Nord, Fratelli d'Italia and Forza Italia did particularly well.

In Genoa, a former left-wing stronghold for 50 years, an alliance of Lega Nord and Forza Italia won 55 percent of the vote.

Next year there will be parliamentary elections and Mr. Berlusconi is maneuvering himself to lead a right-wing bloc which could form a government.

Technically he is barred from holding public office after a tax fraud conviction, but that does not look like stopping him.

His ban last until 2019 but he has appealed to the European Court of Human Rights in Strasbourg and a decision is expected in November.

"Berlusconi is in the race, and he's always been. And with him, we're able to win," said Renato Brunetta, Forza Italia's whip in the lower house of parliament.

Forza Italia and Matteo Salvini's Lega Nord are neck-and-neck in the polls, although both have only 15 percent, way behind the maverick Five Star Movement, on 27.6 percent and Matteo Renzi's center-left Democratic Party, on 26.9 percent.

© REUTERS / Flavio Lo Scalzo
A man sits next to a banner reading "Come on Silvio, Naples is with you, never give up" in front of San Raffaele hospital, as Italian surgeons begin a four-hour heart operation on former prime minister Silvio Berlusconi on Tuesday to replace a defective aortic valve, a hospital statement said, in Milan, Italy June 14, 2016.

But with Renzi and Five Star constantly clashing there is a possibility of a right-wing government, with Berlusconi getting support from the far-right Brothers of Italy party.

Mr. Salvini, at 44, is considerably younger than Mr. Berlusconi and has less baggage but his party does not have support outside of the north, unlike Forza Italia.

But Lega Nord and Forza Italia will not make easy bedfellows.

"Berlusconi's model of center-right has worked for the past 20 years, but it doesn't reflect a changing global environment anymore. The League cannot accept to be a vassal of Forza Italia," said Giancarlo Giorgetti, a Lega Nord MEP.

Mr. Berlusconi underwent open-heart surgery last year and is now recasting himself as the "father of the nation", a far cry from the libidinous lothario who scandalized Italy for years with stories about the bunga bunga sex parties he allegedly hosted.

In 2013 Mr. Berlusconi was jailed for seven years for paying for sex with 17-year-old Karima El Mahroug, a Moroccan national who was better known as Ruby the Heart-Stealer.

Both Mr. Berlusconi and Ms. Mahroug had denied having had sex and she denied she was a prostitute.

He insisted he only tried to help her when she was arrested for an alleged theft because he thought she was a niece of the then Egyptian president Hosni Mubarak. His conviction was quashed in 2015, without him ever spending a day in jail. But earlier this year he was accused of tampering with witnesses.