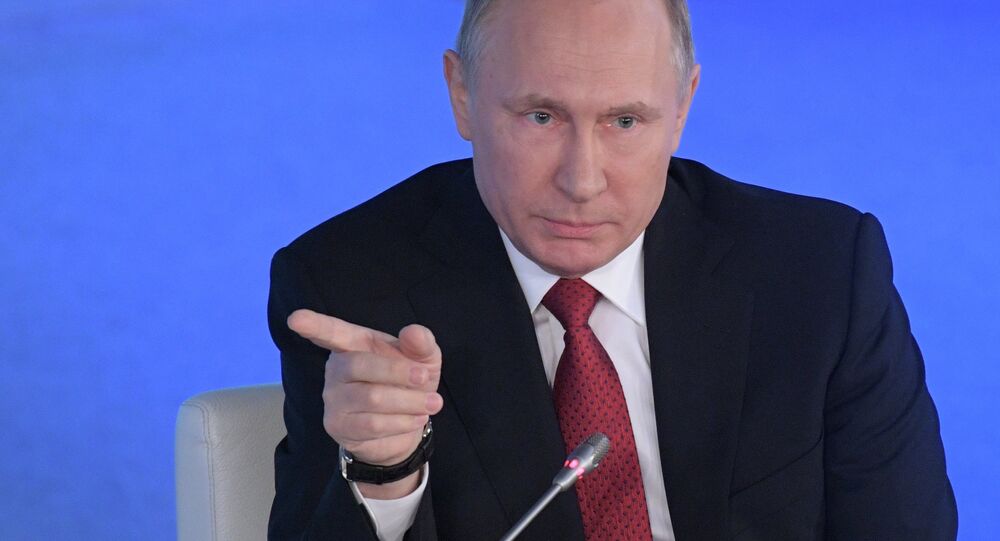 Putin said that Russia is behaving patiently amid sanctions, but time will come when Moscow will be forced to respond to arrogance.

"We, as you know, are behaving with restraint, very patiently, but at some point we will have to respond, it is impossible to tolerate arrogance toward our country forever."

© AP Photo / Evan Vucci
Why New US Sanctions Bill is a 'Clear Message to Both Russia and Trump'
He emphasized that sanctions are completely illegal from the point of view of international law and violate World Trade Organization (WTO) norms.

Moscow will never agree to trans-border nature of the US legislation which breaks international law, Putin added.

"These [sanctions] are evident attempts to use their [US'] geopolitical advantages in a competitive struggle with an aim to ensure own economic interests at the expense of their allies," Putin said.

He added that if the bill is adopted, it could only cause regret as the move would be "extra-cynical."

"We have not seen the final version [of the US anti-Russia sanctions bill] yet, so we do not have a final opinion on this matter either. But we see that for a long time we have constantly been provoked. A lot of diplomats have been sent out without explanation of reasons, then they seized our diplomatic property, which goes beyond all possible boundaries because it contradicts the fundamental norms of international law, diplomatic relations," Putin said, referring to the sanctions imposed in December 2016 by then President Barack Obama as a response to alleged Russian meddling in the 2016 US presidential election.

© REUTERS / Yuri Gripas
'Daytime Robbery': Lavrov on US Conditions on Russian Diplomatic Property Row
Back in December, Putin decided not to respond to sanctions imposed by the outgoing US administration and act in accordance with the ties built with the new US leadership. However, since then, the diplomatic property hasn't been returned. Russian Foreign Minister Sergei Lavrov said earlier that Moscow would take retaliatory measures against Washington if the situation with Russia's diplomatic property in the United States was not resolved.

The Russian leader pointed out that Russia regrets that Moscow-Washinghton ties are being sacrificed to solve US domestic issues.

However, Putin said that he hopes that the US-Russia ties will, however, become stronger in the future, adding that the countries could jointly resolve international issues and fight terrorism more effectively.

"I hope that the current situation will end some day and we will have different quality of bilateral relations, will strengthen them and boost in the interests of the people of the United States and Russia."

© AFP 2021 / SAUL LOEB
Four Possible EU Answers to New US Sanctions Against Russia
He added that there are "many friends" of Russia, as well as "just people with common sense" in the US, while Moscow and Washington could solve together a number of pressing global issues.

"As far as the election of the US president is concerned, this is not our business. We are also not the ones to assess Mr Trump’s work in this rather high position. This is the business of the US people," Putin told a press conference when asked whether he regretted Trump's election.

The US House of Representatives approved by a 419-3 vote on Tuesday a new version of a bill that would impose sweeping sanctions on Russia, Iran and North Korea, and limit President Donald Trump’s ability to lift the restrictions on Moscow. The measures target Russia's defense, intelligence, mining, shipping and railway industries, and restrict dealings with Russian banks and energy companies.

© CC BY 2.0 / Kmccoy / United States Capitol
Anti-Russia Sanctions Bill: EU 'Reaping Fruits of Following Washington's Lead'
According to the Kremlin, Putin is yet to decide on Russia's response to the sanctions bill. Asked by a journalist whether Moscow has hope that the bill, which the House of Representatives passed on Tuesday, would be stalled in the Senate or be vetoed by President Donald Trump, Kremlin spokesman Dmitry Peskov said: "You probably do, I am not talking about any hope."