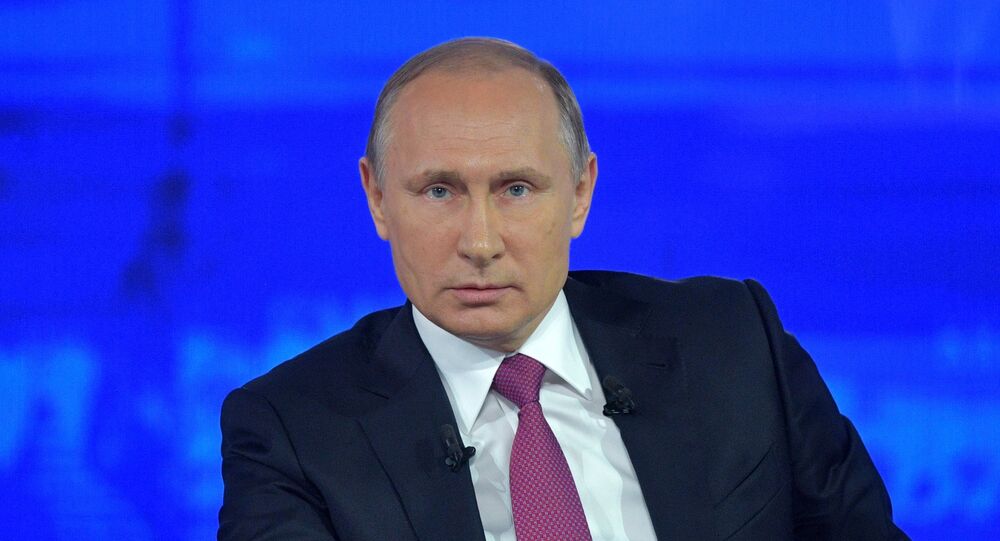 Russian senators' proposal to impose symmetrical sanctions on the United States in response to the bill passed in the House of Representatives is understandable, however, the final decision is yet to be made by President Vladimir Putin, Kremlin spokesman Dmitry Peskov said Wednesday.

© AFP 2021 / KENZO TRIBOUILLARD
France Says New US' Anti-Russia Sanctions 'Appear' to Break Int'l Law
MOSCOW (Sputnik) — The US House of Representatives approved by a 419-3 vote on Tuesday a new version of a bill that would impose sweeping sanctions on Russia, Iran and North Korea, and limit President Donald Trump’s ability to lift the restrictions on Moscow. The measures target Russia's defense, intelligence, mining, shipping and railway industries, and restrict dealings with Russian banks and energy companies.

France and Germany have so far spoken out against the bill that the US House passed overwhelmingly on Tuesday as one that adversely affects European industries while advancing US commercial interests.

"The Russian president makes foreign policy decisions, and we will inform you if and when they are adopted. All other statements are quite understandable," Peskov told reporters. "We are talking about extremely unfriendly manifestations, so the reaction is obvious."

© AFP 2021 / SAUL LOEB
Four Possible EU Answers to New US Sanctions Against Russia
"Thus far, we will not say anything substantial yet. We will not skip ahead," Peskov said, citing the need for the US Senate to pass the bill and for US President Donald Trump to either sign it into law or veto it.

The Kremlin will formulate its reaction to the new anti-Russia sanctions bill after careful analysis, Peskov added.

"In any case, our attitude to this will be formulated after careful analysis and the decision will undoubtedly be taken by the head of state, President Putin."

© Sputnik / Grigoriy Sisoev
EU Business Interests, Energy Security 'Directly Hit' by New US Anti-Russia Sanctions
The bill, which is yet to be approved by the administration of US President Donald Trump, has already prompted criticism within the European Union. Thus, German Foreign Minister Sigmar Gabriel and Austrian Chancellor Christian Kern have condemned the draft of new US sanctions, which, they said on June 15, were about "selling American liquefied natural gas and ending the supply of Russian natural gas to the European market."