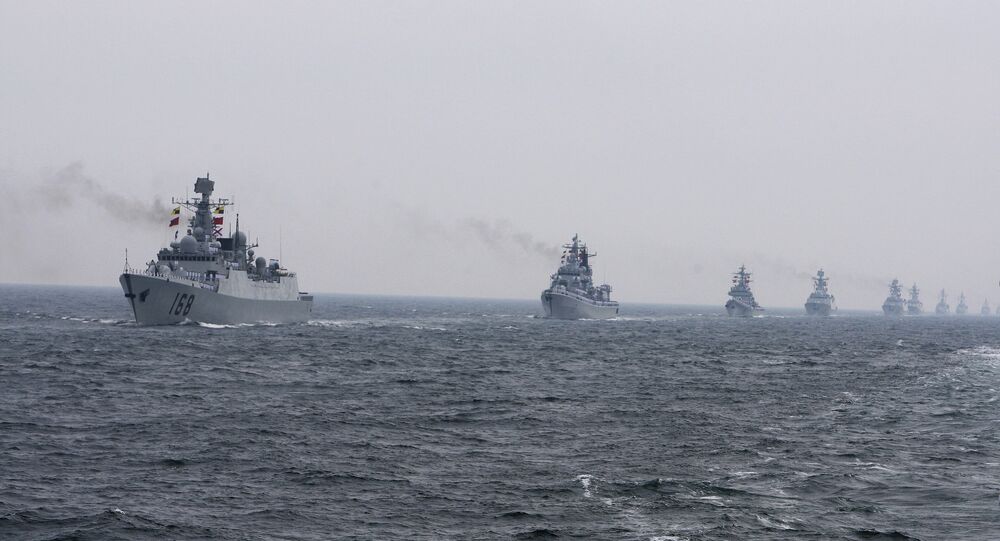 China’s decision to join Russia for joint naval exercises in the Baltic Sea, a first to the Chinese People’s Liberation Army Navy (PLAN), may be linked to a military strategy pioneered by a famous Chinese marshal during World War II, experts told Sputnik.

© AP Photo / Xinhua, Wu Dengfeng
Why Russia-China Drills in Baltic Sea a 'Political Signal to the West'
MOSCOW (Sputnik), Tommy Yang — The first stage of the Russian-Chinese joint naval exercises in the Baltic Sea dubbed Joint Sea-2017 started on Friday and is expected to run until July 28, the Russian Defense Ministry said. The drills will involve nearly ten ships of different classes, over ten aircraft and helicopters of both Russian and Chinese naval forces.

Take it to the Enemy's Heart

China’s decision to send its naval ships as far as to the Baltic Sea, which is the frontline of NATO expansion toward Russian borders, could have originated from a Chinese military strategy called “fanbian”, which was first introduced by a renowned Chinese military leader during World War II, military experts told Sputnik.

“As the United States continued its provocations in the South China Sea, China responded by joining Russia in naval drills on the doorsteps of NATO in the Baltic Sea. This is called the ‘fanbian’ strategy used by Chinese Marshal Luo Ronghuan during the Second World War,” Ni Lexiong, a military expert at the University of Politics and Law in Shanghai, told Sputnik.

© AFP 2021 / JOHANNES EISELE
Chinese Fighter Jets, Ships 'Warn Off' USS Stethem Sailing Near S China Sea Island
During World War II, Chinese troops led by Luo were under siege from Japanese forces from almost all sides in eastern China’s Shandong province. Instead of fighting head on against the enemy forces, which outnumbered his troops by more than 10 times, Luo decided to attack a neighboring town behind enemy lines that was not well guarded to create a diversion. The surprise attack allowed Luo’s troops of about 3,000 soldiers to pull out to safety without severe casualties. Luo described this military strategy as “fanbian,” which literally means “change sides” in Chinese.

The Shanghai-based military expert believes China employed the same strategy by sending its naval ships to the Baltic Sea as a military diversion against pressure from the US Navy in the South China Sea. In May, US Warships sailed within 12 miles of disputed islands in South China Sea, where China continued to build up its military presence.

The current international conditions and common strategic interests also drove China and Russia closer to each other, Ni suggested.

“It’s like China and Russia have their backs against each other now. They need to lean on each other for support to deal with hostilities from different fronts,” he said, adding that the two countries are trying to “keep each other warm by sticking together.”

© REUTERS / Bobby Yip
Chinese Navy's Growing Power to Stretch Its Sea Legs Makes US Navy Nervous
Historically, as a nation built around agriculture, China never had a strong navy, which was not critical to its prosperity. Attempts by emperors in the Ming Dynasty to build a strong Chinese naval fleet incurred heavy costs on the national budget and shortened the rule of the Ming emperors by almost 100 years, Ni argued.

However, following more than 30 years of explosive economic growth, China’s maritime interests continued to expand, and the sea route through the Strait of Malacca is being viewed as a “lifeline” to the Chinese economy with over 80 percent of the nation’s crude oil imports from the Middle East and Africa having to go via this route.

As a result, Chinese leaders are determined to build a strong navy to safeguard China’s economic interests, Ni explained.

“Chinese President Xi Jinping, as a son of the revolutionists who founded the current regime, is very focused on upgrading China’s military. I believe the PLA Navy can catch up or even surpass the US Navy in 10-20 years,” he said.

As the capabilities of the PLA Navy continue to improve, the world is expected to see increased presence of Chinese naval fleets, experts told Sputnik.

“China is building a ‘blue-water’ navy capable of long-range missions. In the future, I believe Chinese naval fleets will frequently appear in the north Atlantic, entering the key regions for Western countries in Europe and America,” Guo Peiqing, executive director of the Institute of Polar Law and Policy at the Ocean University of China, told Sputnik.

“Conducting the exercise in the Baltic allows China to send other messages that it is a global power. It is capable of doing the same things in European waters which European powers such as the United Kingdom and France do in the Asia-Pacific,” James Goldrick, a non-resident fellow at the Lowy Institute for International Policy who served in the Royal Australian Navy for almost 40 years before retiring in 2012, told Sputnik.

Earlier this month, China established its first overseas naval base in Djibouti, a country on the Horn of Africa around the Gulf of Aden.

The Australian expert pointed out that, while China remains in many ways well behind the US Navy in overall capability and behind the Russian Navy in many warfare areas, it is advancing rapidly and the scale of its operations is increasing steadily.

Goldrick argued the PLA Navy’s effective capability to conduct extended deployments is now greater than the resource-constrained Russian Navy, adding that it is likely to become more obvious in the next few years, particularly after the first Chinese-built aircraft carrier becomes fully operational.