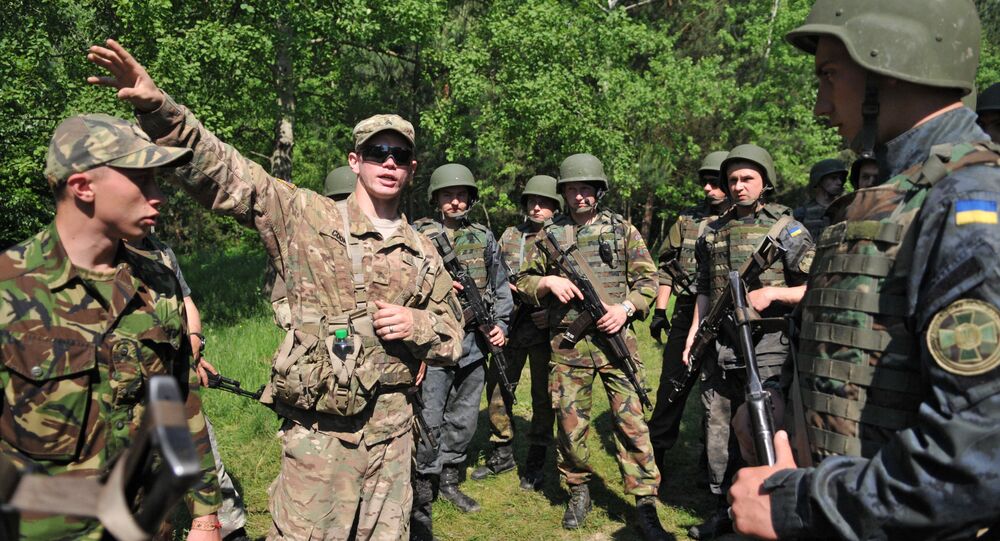 Last week, after a visit to Kiev by NATO chief Jens Stoltenberg, Ukrainian President Petro Poroshenko said that his country would need to carry out more reforms to qualify for NATO membership. However, Ukraine expert Vladimir Zharikhin says Kiev's accession to the alliance may be a formality, since it's already becoming a de facto NATO outpost.

Speaking to reporters after his meeting with Stoltenberg on Monday, Poroshenko said that Kiev would not be applying for membership just yet, since it still needs to introduce a number of reforms to meet entry requirements.

"We are looking forward to reforms and have a clear schedule for what we have to do until 2020 in order to meet the membership criteria, because as of today we do not meet these criteria, since nothing has been done in these 20 years," the president said.

Kiev's aspirations for NATO membership has been an on-again off-again affair since 2003, when then-President Leonid Kuchma proclaimed it a strategic goal, before backing off from the idea a month later. Orange revolutionary president Viktor Yushchenko continued the push toward the alliance, but ended up making little progress. Yushchenko's successor, Viktor Yanukovych, rejected the prospect of NATO membership in favor of Ukraine's long-standing policy of non-alignment.

After Yanukovych's ouster in the February 2014 Maidan coup d'état, Kiev returned to its pro-NATO course with a vengeance. In December 2014, Ukraine's parliament canceled the country's non-aligned status. A year later, President Poroshenko signed off on a new military doctrine which includes the objective of bringing the country's armed forces in line with NATO standards.  During his annual address to parliament last year, Poroshenko adoringly referred to the alliance as a "pointer as motionless for us as the North Star in the starry sky."

Moscow has been critical of Ukraine's efforts to join the alliance, recently warning that NATO's continued encroachment on Russian borders would "not contribute to the strengthening of stability and security on the European continent."

© AP Photo / Mikhail Palinchak, Pool
Why Launch of Ukraine's NATO Membership Dialogue is Another 'False Alarm'
Most experts remain skeptical over Ukraine's prospects for NATO membership, seeing it as a proverbial 'carrot on a stick'.

However, Vladimir Zharikhin, deputy director of the Institute of CIS Countries, is concerned that formal membership in the alliance may turn out to be a mere formality, with the country already becoming part of the US-led military machine.

Speaking at a round table at the Rossiya Segodnya press center in Moscow last week, Zharikhin said that while he didn't think that NATO membership was on the table for Ukraine at the moment, Kiev and Washington could easily turn to another option – a bilateral military agreement like the one that already exists between the US and Japan. Such an agreement would allow the US to base its troops in the country, with NATO's European members deployed as 'advisors', 'trainees' and other 'assistants'.

The essence of such an arrangement would be similar to NATO membership, the analyst said, and the process toward its implementation has already begun. "Directly or indirectly, whether or not Ukraine is part of NATO, it has already almost become part of the US military machine."

Expanding on his remarks in an interview with Russia's Svobodnaya Pressa online newspaper, Zharikhin outlined what he believed was the real goal of the US drive to set up military bases across the globe.

"Perhaps our military experts won't agree with me, but I believe that the Americans create bases – including the possible ones in Ukraine, not in order to attack someone…Rather, this is done to ensure the stability of the regime which the US has established in a particular country," he said.

The analyst recalled that apart from France, the US has created bases dotting the territory of virtually every other NATO country in Europe. These bases, he said, help ensure the stability of friendly governments.

"Why does the US need friendly governments, particularly those which border Russia? They're needed to ensure that Washington's nightmare scenario – a tight economic alliance between Russia and Europe, doesn't become a reality. If it did, the US would find itself on the periphery of the world economy. Moreover, China would join in. And then we would have everything –financial, technological, human, natural, water and other resources, all one space, undivided by seas and oceans."

© Photo : Halford J. Mackinder
Map of the "Heartland Theory", as published by H.J. Mackinder in 1904, which suggests that the Heartland's size and central position in the world makes it the key to controlling the World-Island of Europe, Asia and Africa.

In other words, Zharikhin said, Washington's strategic goal is to preserve tensions between the 'individual pieces' of this potential mega-alliance.

"Nothing new has been thought up to do so. It's simply necessary to create a cordon sanitaire between Western Europe, the party that would be most interested in such an alliance, and Russia. And Ukraine is just another brick in this cordon sanitaire."

© AP Photo / Pavlo Palamarchuk
What's Behind Ukraine's Alternative to Russia's Nord Stream 2 Gas Pipeline Project?
Asked whether a formal US-Ukrainian alliance would dangerous to European stability, given the dysfunctional and dangerous people who are presently in power in Kiev, the analyst said that the danger should not be exaggerated. Ukrainian authorities, he said, simply would not be allowed to do something insane, like attack Russia.

"Factually, they do whatever the US Embassy tells them to. This has been demonstrated again and again," both by Ukraine's parliament, and its president. "Ultranationalist hooligans in the streets are one thing. Decision-making on matters of war in peace in Europe is another, and is not the prerogative of even the Ukrainian president, much less the parliament."

As far as Russia is concerned, Zharikhin suggested that Moscow has already done what it could under the circumstances which have emerged since 2014. "After all, we did not allow for the US to create a naval base in Sevastopol. That's first. Second, by supporting the Donetsk and Lugansk republics, we have created serious problems for the Americans. Because putting military bases in a country facing an open military conflict on its soil isn't exactly comme il faut."

"We can talk as much as we like about what we failed to do – in 1991, 1992, 1996, etc., but that which could be done in 2014 was done," the analyst added. The main thing, he stressed, is for Moscow not to become complacent, since the US, and its allies in Kiev have recovered to some extent from their wounds and begun to take the initiative, politically and diplomatically.

In other words, Zharikhin suggested that while "we can snicker as much as we like about the fact that Poroshenko only spent six minutes with Trump in the White House, we shouldn't forget about the two days he spent with Vice President Pence and Defense Minister Mattis in Washington."

NATO Membership as Carrot on a Stick for Ukraine

Poroshenko Explains Why Ukraine Not to Apply for NATO Membership Yet

Why Launch of Ukraine's NATO Membership Dialogue is Another 'False Alarm'

Ukraine's Rapprochement With NATO Not to Strengthen Security in Europe - Kremlin