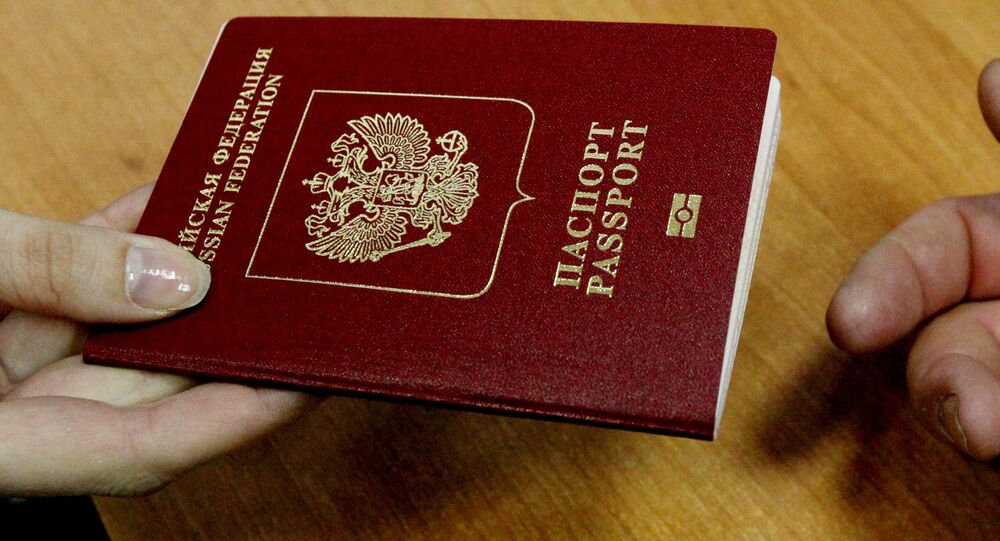 Ukraine's foreign minister has walked back Kiev's tough rhetoric about introducing a visa regime with Russia, saying the Russian response would create problems for Ukrainian citizens. Speaking to Sputnik, Ukrainian ex-lawmaker Alexander Golub warned that if Kiev moves forward with the initiative anyway, millions of Ukrainians will be affected.

Ukrainian Foreign Minister Pavlo Klimkin has acknowledged that the introduction of a visa regime with Russia would create problems for Ukrainians.

"The simple introduction of visas would not give us the effect we would like to see," the diplomat said, speaking during question period in Ukraine's parliament on Friday.

© Sputnik / Sergey Averin
Majority of Ukrainians Oppose Potential Visa Regime With Russia
"On the contrary, doing so will create significant problems, given the fact that Russia will take advantage of these problems in order to carry out both provocations and conscious policy to introduce restrictions against Ukrainian citizens who live in the occupied territories, and in occupied Crimea," he added.

In the minister's view, the decision to introduce biometric control at the border was the "optimal" option for Kiev, and one "supported by our friends and partners."

In the spring, lawmakers from the Petro Poroshenko Bloc and People's Front parties proposed the introduction of a visa regime with Russia. Last month, Klimkin said that the Foreign Ministry was ready to implement the necessary measures if lawmakers passed the relevant legislation on the issue.

Opinion polling from last month found that 51% of Ukrainians were opposed to a visa regime with their eastern neighbor, with 33% saying they were in favor, and another 16% undecided.

Last week, Kiev announced that it would be introducing biometric control for all foreigners traveling to Ukraine, including Russian citizens, starting in January 2018. Russian citizens will also have to notify the Ukrainian Foreign Ministry about their arrival beforehand. At present, Russian and Ukrainian citizens enjoy visa-free travel between the two countries.

© Sputnik / Valery Morev
Moscow Regrets Ukraine Wants to Isolate Itself From Russia With New 'Berlin Wall'
Russian officials have responded to Kiev's decision, saying that Moscow regrets the move, and sees the policy of severing contacts with Russia as an attempt to build a new 'Berlin Wall'.

Speaking to Radio Sputnik, Alexander Golub, a veteran Ukrainian ex-lawmaker and member of the presidium of Union of Left Forces, commented on how Kiev's decision will affect ordinary Ukrainians.

According to the politician, Kiev authorities seem set on sticking to their plan to cut all possible ties with Moscow, "at the economic level, at the political level, and as far as the possible introduction of visas is concerned, at the human level."

"It's another matter entirely that Kiev is simply not prepared for this step, given the social and economic situation inside the country itself," Golub added. "Because the application of countermeasures by Russia would lead to problems for millions of people who today must work in Russia to support their families."

Noting that he regularly speaks to his compatriots who work in Russia, the politician noted that "between 80-90% of them would like to obtain Russian citizenship. But they are afraid of a certain level of pressure, and a number of difficulties which would await the members of their families back in Ukraine. In total, I think we can talk about 4-5 million Ukrainians who would like to obtain Russian citizenship," the former lawmaker said.

© AFP 2021 / SERGEY BOBOK
Millions of Dollars Stolen From Ukrainian 'Great Border Wall With Russia' Project
According to Golub, the difficult situation in Ukraine can change for the better, but only in circumstances which are outside Kiev's ability to control. "When will it all end? I think this will happen when the people implementing this policy give up power, at a minimum, or are made to respond in court for the crimes they have committed," he said.

"But I think it is obvious that a number of Western countries are interested in exactly this position for Ukraine. They will continue to squeeze out the benefits from the confrontation between Ukraine and Russia, which they themselves artificially inflame, to the end. But when those benefits are exhausted, then, perhaps, they'll give up on their puppets, and something will change," the observer concluded.

Last month, a poll by Rating Group Ukraine found that 75% of Ukrainians believe their country is 'in a state of collapse'. 70% said they fear the situation could lead to new large-scale protests of the kind which rocked the country in 2014 and ended in the Maidan coup d'etat.