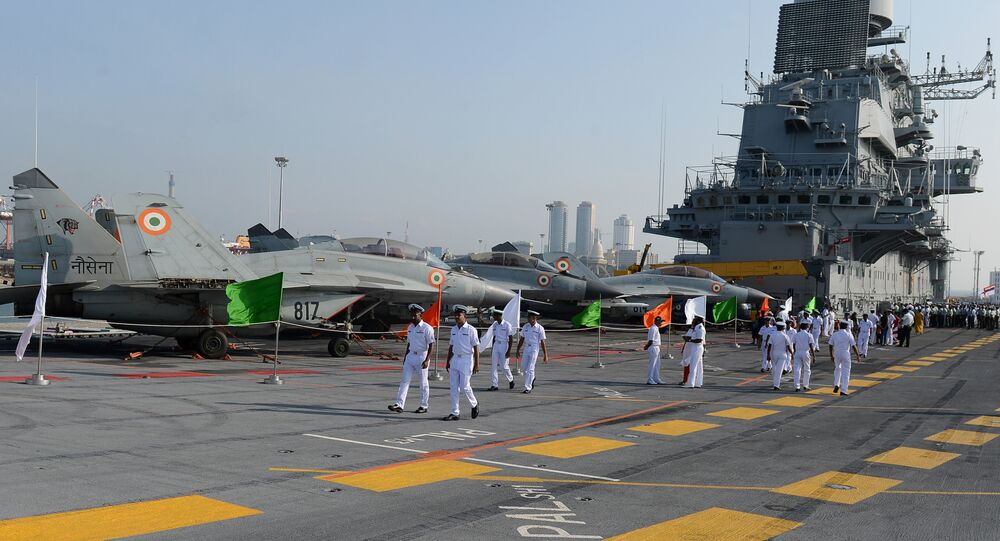 The Malabar-17 naval drills were kicked off by the United States, India, and Japan on July 14. Speaking to Sputnik, experts noted that the recent exercises come as a demonstration of force to rising China, with New Delhi showing Beijing that it enjoys a partnership with influential allies.

About 20 ships, including aircraft carriers and submarines of the United States, India and Japan, are involved in the Malabar-17 naval drills running from July 14 to July 17. The exercises are being held in the Indian Ocean.

Speaking to Sputnik China, experts called attention to the fact that the recent joint maneuvers in the Indian Ocean are carried out following US provocations in the South China Sea and the aggravation of tension in Sino-Indian border dispute.

Zhou Yongsheng, an expert with the Chinese Diplomatic Academy's International Relations Center, underscored that the message of the current drills is "to close ranks of like-minded allies."

"This is an attempt to form their potential at the international level and to 'strike' at the opponent with whom they are competing," Zhou believes.

"Although these exercises are routine, however, the three participating countries have teamed up for a number of strategic purposes," Zhou told Sputnik, "In particular, the main strategic goal of Japan and India is to contain China. Despite the fact that the US is also considering deterring China it is primarily focused on global strategy. The containment of China is only part of [the US] strategy. Its goal is to maintain control over the Indian Ocean."

In an apparent attempt to downplay a somewhat "anti-China" character of the Malabar-17 drills India blocked Australia's participation in the exercise. Indian military sources and diplomats explained the move by the desire not to irritate Beijing.

Nevertheless, it appears that the Malabar-17 participants are trying to demonstrate their military might to China: "it's the first naval exercise between the three countries to involve carriers from each navy," as The Diplomat noted.

Indeed, India has sent its INS Vikramaditya aircraft carrier while the US has dispatched the guided missile cruiser USS Princeton, along with the rest of the Nimitz Carrier Strike Group to the site of exercise. As for Japan, it has brought its warship Izumo — the largest Japanese vessel since World War II.

Some observers believe that this development comes as a response to the Chinese carrier's "Liaoning" recent march to Hong Kong via the Taiwan Strait.

"Why do these three countries conduct antisubmarine exercises in the Indian Ocean? The fact is that in recent years, India has repeatedly made claims about a threat allegedly posed by Chinese submarines in the Indian Ocean. For its part, Japan has a strong anti-submarine potential, and it is in tense relations with China," the Chinese expert noted.

Tatiana Shaumyan, the head of the Center for Indian Studies at Institute of Oriental Studies, drew attention to the fact that the annual Malabar naval drills are usually held in the Bay of Bengal. According to the academic, this is India's way of showing China that New Delhi has strong military allies.

"Of course, the goal of the exercise is to show China that India has allied relations with such countries as the United States and Japan, and that it wants to demonstrate its capabilities in the region," Shaumyan told Sputnik.

© AFP 2021 / ARIS MESSINIS
US Bombers Buzz South China Sea as Trump and Xi Prepare For G20 Meeting
According to Shaumyan, the relationship with the US is of primary importance for India.

On the other hand, the drills have coincided with growing tensions at the Sino-Indian border, she added.

"Of course, with joint exercises, India wants to show that it is not alone, that it has quite powerful partners," she stressed.

Recently, Washington has once again tried to show China its military power in the region. First, the US destroyer, and then two bombers appeared near the islands in the South China Sea claimed by China.

The Malabar exercises is the latest attempt to exert military pressure on China, according to Valery Nikolayev, an expert of the Center for the Study of Southeast Asia, Australia and Oceania at the Institute of Oriental Studies.

"The situation in the South China Sea is quite acute," Nikolayev told Sputnik, "The construction of islands [in the South China Sea], and the rise of China's Navy, which potential has recently been modernized, have raised alarm among the countries of the region, and have become a pretext for military provocations on the part of the US."

"China's policy in the South China Sea is condemned by both the US and Australia. Vietnam and other Southeast Asian countries have also signaled concerns. They see an attempt by China to create a powerful military group [in the region] that will control the straits. At the same time they rely on the US support, and they also wouldn't refuse to rely on Japan," the expert pointed out.

However, the drills may pour more gasoline on the fire of ongoing tensions in the region and deepen the rift between Beijing and New Delhi.

Leonkov called attention to the statement made by US Navy Cmdr. Rear Adm. William Byrne that the ongoing drills are a "strategic message to China."

"By voicing such an interpretation of the message of the drills, the US wants to fuel the flame which was previously burning between India and China over [China's] presence in the South-China Sea," the military analyst stressed, adding that "it simply might be beneficial to someone to pit India against China as it might breed certain friction in such an organization as BRICS."

Malabar Drills: Who's Trying to Pit India Against China, 'Add Fuel to the Fire'?