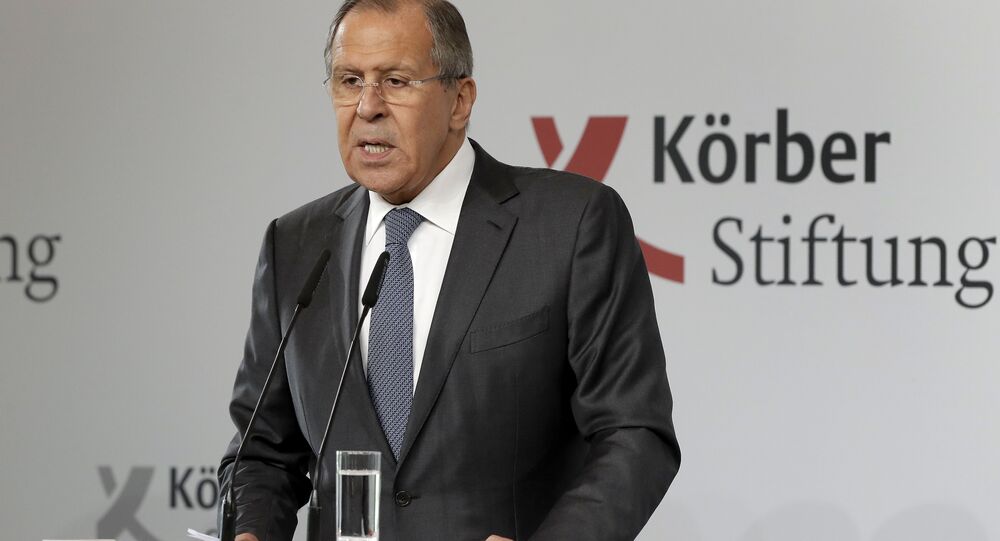 Moscow will not participate in negotiations on lifting anti-Russia sanctions, Lavrov said.

"I would like to reiterate, though it is obvious, that the issue of introducing sanctions is the right of the UN Security Council, exercised only for peace and security reasons. I again confirm that we will not participate in any talks concerning conditions for the lifting of sanctions," he said.

Since 2014, relations between Russia and the European Union and the United States, deteriorated amid the crisis in Ukraine and Crimea's decision to rejoin Russia. Brussels, Washington and their allies introduced several rounds of sanctions against Russia on the pretext of its alleged involvement in the Ukrainian conflict, which Moscow has repeatedly denied. In response to the restrictive measures, Russia imposed a food embargo on some products originating in countries that have targeted it with sanctions.

© REUTERS / Mike Segar
FBI, DHS State Alleged Russian Hacking Changed Nothing in 2016 Election Outcome
Accusations of Russia's interference in elections in Europe are a destructive approach, although it is flattering for Russia that it is considered a country deciding the world's fates, the Russian foreign minister said.

"We are, of course, flattered that we are presented as a country that can decide the fates of the world, in the United States and in Germany," Lavrov said, speaking at an event organized by the Kerber Foundation.

"I believe that this is… a very destructive approach," he said.

Russia is calling on the western countries to not force Ukraine to make an "either, or" choice of whether it wants to be with the European Union or Russia, Lavrov said.

"We seek good neighbourly relations with Ukraine and want our western colleagues which are conducting a number of their programs including the Eastern Partnership to not make our neighbours make the ‘either-or’ choice," Lavrov said.

© Photo : President of the Ukraine Press-Service
US Doesn't View Ukraine as 'Reliable Partner' for Donbass Talks
The Donbass conflict erupted in April 2014 as a local counter-reaction to the West-sponsored Maidan coup in Kiev that had toppled President Viktor Yanukovych in February. Residents of the Donetsk and Lugansk regions held independence referendums and proclaimed the People's Republics of Donetsk and Lugansk. Kiev has since been conducting a military operation, encountering stiff local resistance.

Russia is Against North Korean Provocations

Russia is against North Korea’s provocations and does not have a channel for close communications with Pyongyang, Lavrov said.

"We are categorically against the provocations which North Korea carries out … We do not have any special channels of communications with Pyongyang even though it is a close neighbor," he said.

Tensions on the Korean Peninsula escalated as Pyongyang carried out a number of missile launches and nuclear tests in the recent months, which are considered to be in violation of the UN Security Council resolutions.

Moscow does not support Syrian President Bashar Assad, but is committed to the UN Security Council resolution, which says that the fate of the Syrian Arab Republic and the Syrian leader can only be decided by the Syrian people, Lavrov said.

"We do not support Assad, we are committed to the UN Security Council's resolutions. In the case of Syria, it is written in black and white there, everyone voted for it, that Syria's future may only be decided by the Syrian people," he stated.

© Photo : Bertramz
Kurds Vow to 'Defend Themselves' as Turkey Seeks to 'Cut Off Syria's Afrin'
Since 2011, Syria has been engulfed in a civil war, with government forces fighting against numerous opposition and terrorist groups, including al-Nusra Front and Daesh, banned in a range of countries, including Russia.

Since September 2015, the Russian Aerospace Forces have been carrying out airstrikes in Syria targeted at terrorist positions at the request of Assad.

Russia Ready for Contacts With Georgia on Various Levels – Lavrov