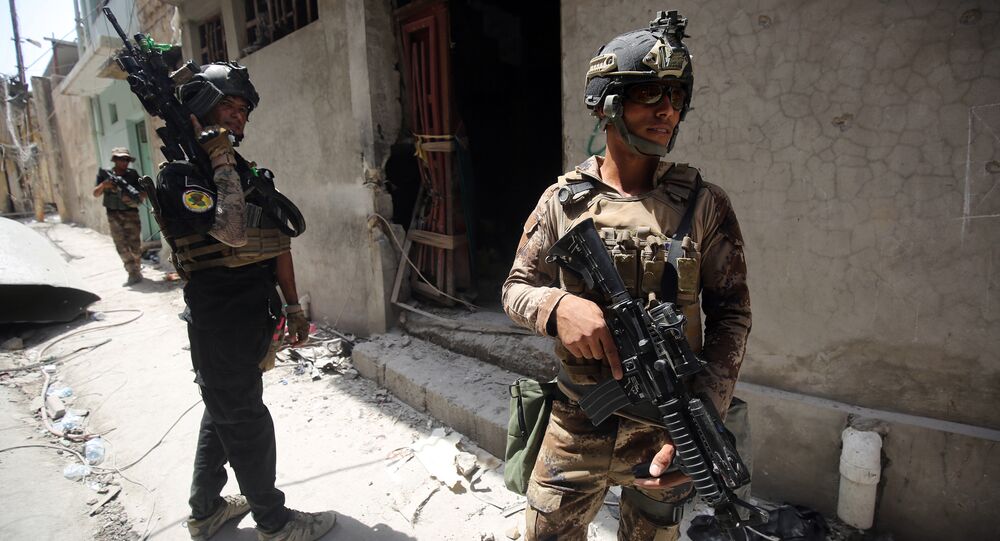 Mosul Liberation: Why US-Led Coalition May End Up in a Terrorist Trap

The liberation of former Daesh stronghold Mosul has not yet brought the war against terrorism to a halt, Israeli political analyst Avigdor Eskin writes, warning that Washington is about to fall into the same trap it had found itself in following the Iraqi war of 2003.

© REUTERS / Alaa Al-Marjani
Iraq After Mosul Liberation: 'Most Difficult Thing is to Eradicate Radical Ideology That Contaminated People's Minds'
The recapture of the northern Iraqi city of Mosul doesn't mean the end of the war against Daesh (ISIS/ISIL) but its transformation into yet another phase, analysts say.

On July 9, the Iraqi Armed Forces raised their national flag on the banks of the Tigris River in the historical part of Mosul proclaiming the liberation of the city.

The operation aimed at retaking the city from Daesh was kicked off in October 2016 by the Iraqi troops backed by the US-led international coalition. The eastern part of the city was liberated in January.

The city fell under the control of terrorists in 2014 and had been the de facto Daesh key stronghold in Iraq for three years.

However, the situation is not as easy as it seems.

"The situation in Mosul is more complicated, if compared to that in Aleppo after its liberation," Israeli political analyst Avigdor Eskin writes in his recent op-ed for RIA Novosti.

© REUTERS / Alaa Al-Marjani
Fall of Mosul Points to Future Iran Showdown With Saudis, Israelis in Syria
"The seizure of the city by Daesh three years ago became possible due to the high solidarity of the population with the hordes of al-Baghdadi," Eskin noted. "As you know, the Americans disbanded Saddam Hussein's army in Iraq, which relied mainly on the Sunnis. Being left out in the cold the Sunni military became easy prey for radical movements. Some of them ended up among Daesh [fighters] and captured Mosul."

Eskin wrote that contrary to popular belief, Mosul residents didn't actually resist al-Baghdadi with its supporters: many of them saw the emergence of Daesh as retaliation to the US-backed Shiite rulers.

The Americans have not yet understood what awaits them in the near future, according to the Israeli analyst.

"The level of antagonism of Aleppo inhabitants towards the Syrian troops was significantly lower than that of Mosul [residents] towards Iraqi soldiers, Iranian military and Shiite militias," he noted.

"Many Daesh fighters scattered around the city and are temporarily living a peaceful life. But we can say with confidence that soon they will come out and conduct bold terrorist attacks against the Americans and Iranians," he warned.

© REUTERS / Alaa Al-Marjani
Members of the Counter Terrorism Service pose for a picture with an Iraqi flag in front of the ruins of Grand al-Nuri Mosque at the Old City in Mosul, Iraq, June 30, 2017

Boris Dolgov, the senior research fellow at the Institute for Oriental Studies at the Russian Academy of Sciences, echoes Eskin.

"The loss of Mosul, one of Iraq's largest cities, by terrorists, shows that Daesh is broken and suppressed as a concrete military and political structure. This is really a great success achieved by all the forces that fought against Daesh. But this is not a complete victory [for the US-led coalition]," Dolgov told Radio Sputnik.

The academic underscored that Daesh is not only a terrorist structure but also a dangerous ideology, which has been spreading fast across the Middle East, North Africa and Central Asia.

"Let me remind you that there have been attempts to create such military and political structures in Algeria, Sudan and Egypt. So the idea itself will continue to exist, and it is possible that there will be other attempts to implement this ideology," Dolgov said.

© REUTERS / Carlos Barria
Daesh to Be Soon Wiped Out From Iraq, Syria - Trump
Moreover, a number of Daesh commanders had fled Mosul before it was liberated and moved to Syria. Now some of them have settled in the Syrian city of al-Mayadin, not far from Deir ez-Zor, the academic remarked.

"The [Daesh] leadership sent [their militants] to other areas of Iraq and Syria where they will most likely continue the guerilla war. They were told to create sleeping cells and wait for the order and then to relocate to other states — to Libya, Afghanistan — and to penetrate into European countries under the guise of refugees," Dolgov told Radio Sputnik.

For his part, Eskin also calls attention to the fact that Daesh terrorists have begun to establish a presence in other regions.

"Surviving terrorists are already strengthening their positions in Libya and other countries of the African continent. They are preparing for new seizures of territories there," the Israeli political analyst highlighted.

Eskin stressed that the Americans are walking into the same trap by not making efforts to tackle the problem comprehensively.

According to the Israeli analyst, it is time for the US to team up with Russia to solve the Daesh problem through joint counterterrorism actions both in the Middle East and North Africa.