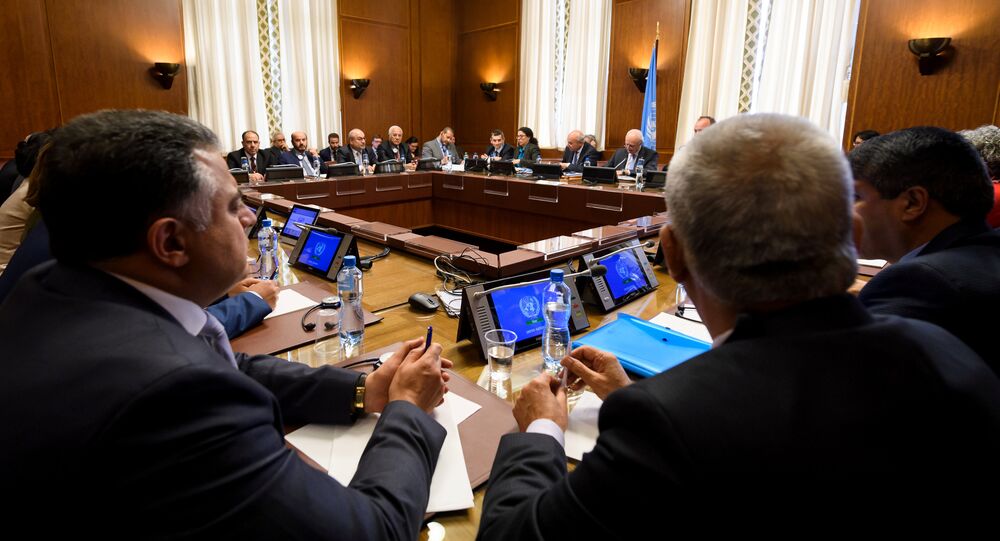 Syrian opposition's High Negotiation Committee (HNC) group, formed with the help of Saudi Arabia, seeks to focus on the issue of political transition at the current round of the intra-Syria talks in Geneva, HNC delegation head Hasr Hariri said, accusing the government delegation of refusing to participate in political process.

"We discussed with de Mistura the current situation about the political process. We insist on the issue of political transition. We participated in very useful technical meetings in June and July about baskets 2 and 3 [governance, constitution] and about general principles about the future and shape of the Syrian state… We see the continuous refusal of the Syria regime to participate in any political negotiations."

If all parties would be on the same page concerning the political transition in Syria, they "will be welcome to have one common ground" with the HNC, he noted.

"We also delivered a memorandum about refugees," the opposition figure said.

Syrian President Bashar Assad has repeatedly said that he is ready to step down if the Syrian people decide so.

Negotiations on the Syrian settlement take place on two parallel platforms: UN-mediated Geneva talks, and Astana talks that are brokered by Russia, Turkey and Iran. The latest Astana negotiations were held on July 4-5, whereas the seventh round of Geneva talks kicked off on Monday.

The seventh round of intra-Syrian talks in Geneva kicked off on Monday, with the delegation of the Syrian government, led by Syria's Envoy to the United Nations in New York Bashar Jaafari, and three groups of the Syrian opposition — Riyadh-backed High Negotiations Committee (HNC), Cairo and Moscow platforms – gathering in the Swiss city.