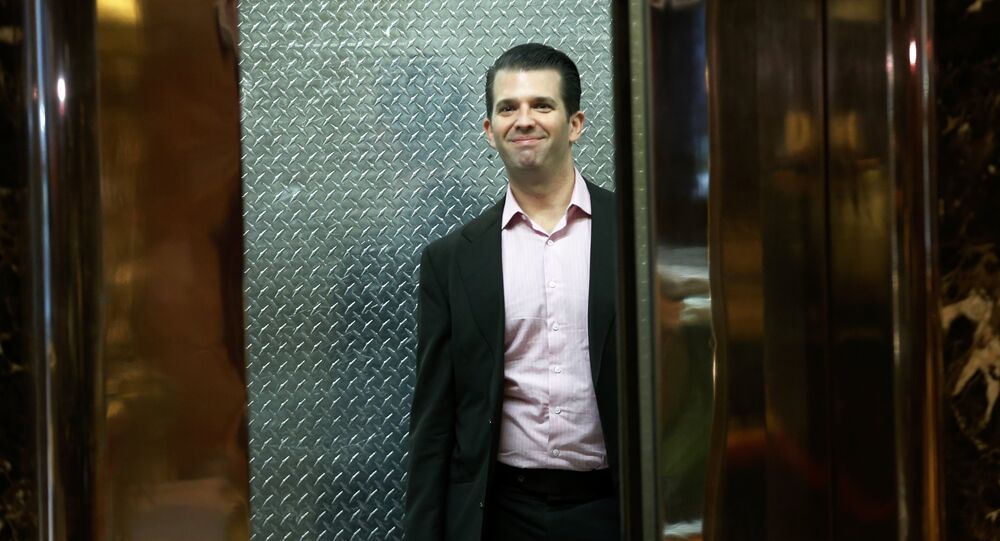 "I was astonished when I found out that a Russian attorney is accused, or Donald Trump Jr., is accused of talking to a Russian lawyer. This sounds wild to me," Lavrov said at a joint press conference with his Belgian counterpart.

He questioned how discussions with a lawyer "can be a problem, how can this pose a threat to somebody?"

Commenting on mainstream media coverage, Lavrov said: "It is amazing how serious people can make a mountain out of a molehill, so to speak. Maybe there is no molehill there."

© AP Photo / Andrew Harnik
Trump Says His Son 'High-Quality' Person in Reaction to Emails Release
Over the weekend, The New York Times reported that Donald Trump Jr. had held an unreported meeting with Russian lawyer Natalia Veselnitskaya. The Russian lawyer has claimed that the 30-minute meeting focused on the Magnitsky Act and the issue of Russian adoptions by US citizens. On Sunday, Trump Jr. issued a statement, in which he said it had become clear during the meeting that Veselnitskaya had no meaningful information on the Democratic National Committee’s links with Russia-connected individuals.

© AP Photo / Carolyn Kaster
Trump Jr. Says Did Not Inform Father of Talks With Russian Lawyer
On Monday, Kremlin spokesman Dmitry Peskov said he did not know who Veselnitskaya is.

Veselnitskaya herself denied any connection to the Kremlin, said she did not request a meeting with Trump Jr. during the 2016 presidential campaign, and noted that she has no information damaging Clinton.

After the release of emails, US President Trump called his son a "high-quality person."

Donald Trump Jr.’s lawyer Alan Futerfas said earlier that there have been no grounds for sensationalizing the fact that his client met with a Russian lawyer in 2016, calling it "much ado about nothing."

Trump Jr. Says Did Not Inform Father of Talks With Russian Lawyer