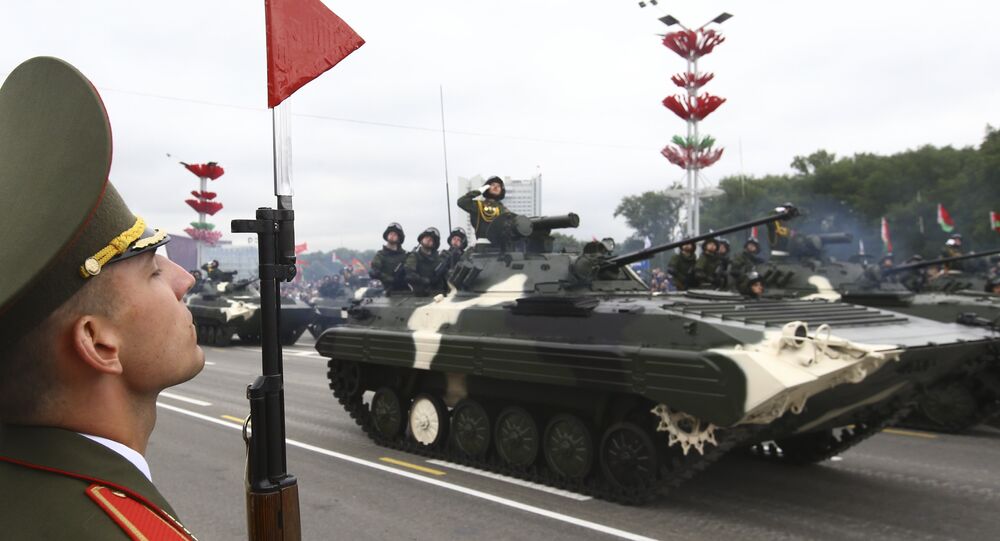 RIA Novosti political observer Vladimir Lepekhin outlines the tools used by the European Union and NATO to try to pull the Eastern European nation of Belarus into the Western sphere of influence, and explains what Moscow and Minsk can do to stop this creeping danger.

Last week, Belarus celebrated its Independence Day. Russian President Vladimir Putin congratulated Belarusian President Alexander Lukashenko and the Belarusian people on the occasion, and highlighted the high level of cooperation between the countries via the Union State, the Eurasian Economic Union, and other structures in the post-Soviet space.

© Photo : Host photo agency
Putin Congratulates Belarusian Leader With Independence Day
In an analysis piece devoted to the current state of Russian-Belarusian relations, Vladimir Lepekhin wrote that it was symbolic that unlike most other post-Soviet countries (Russia included), Belarus celebrates its independence not on the day "of 'liberation' from the Soviet empire," but on the anniversary of the liberation of the Belarusian capital of Minsk from the Nazis on July 3, 1944.

"This Republic," Lepekhin noted, "knows very well the price of true freedom, and the fact that the concept of post-Soviet countries' independence from today's Russia is not only irrelevant, but disingenuous. Today, for each country of the former Soviet Union, the threat to genuine sovereignty comes not from Moscow, but from those global forces which, under the guise of slogans about freedom, are building a web of new, hybrid dependencies."

The need to confront the forces of globalism, which can be characterized as modern-day fascism, is more urgent than ever, according to the analyst, "all the more so because modern fascism is fundamentally different from the German fascism of the mid-20th century. It is extremely 'tolerant', has a honey tongue concealing its heart of gall, and disguises its expansion into the post-Soviet space behind various 'humanitarian actions' and 'partnership' programs."

© AP Photo / Mindaugas Kulbis
What Pretext Has NATO Found for Its Demands to Limit Russia's Sovereignty?
For many years, Belarus had held out as being among the countries which were most resistant to these forces' siren call. "The Belarusian president has repeatedly called Russia a 'fraternal country', while referring to the United States, Europe and China as 'partners'." This, Lepekhin wrote, "is a logical approach for a multi-vector foreign policy of a state striving for peace and prosperity in a world of the global market."

"On the hand, it must always be kept in mind that subjects of this world order do not have true friends, but only their own interests. And, subsequently, the development of partnership relations does not necessarily imply the participation of any country in all the projects proposed by its 'partners'. After all, some of these projects can be fatal."

One such project, in the journalist's view, is the European Union's Eastern Partnership program. That project, he noted, has already "proved fatal for Ukraine, and today threatens the sovereignty of Belarus and several other post-Soviet countries."

© AP Photo / Czarek Sokolowski
Minsk Views Polish Policy of Demolishing Soviet Monuments as History Rewrite
Developed by Poland and Sweden in 2008 by Radoslaw Sikorski and Carl Bildt, the project is aimed at six post-Soviet countries: Armenia, Azerbaijan, Belarus, Georgia, Moldova and Ukraine. At one point, Brussels also tried to expand the project to the Russian exclave region of Kaliningrad.

The program, Lepekhin noted, "became a logical element complementing NATO's policy of eastward expansion. In particular, the 2009 Prague Declaration emphasized that the Eastern Partnership would be guided by the principle of conditionality – with countries included in the project only in the event that they fulfill the requirements set out by the EU. Dialogue among equals (without which a real partnership is unimaginable) and an effort to take account of the interests of the states involved in the project were thereby excluded from the start."

Simultaneously, the Eastern Partnership program was seen as an alternative to Eurasian integration, with Brussels effectively forcing post-Soviet leaders to choose – either the EU or the yet-to-be-formalized Eurasian Economic Union.

"As a result, in November 2013, at the summit in Vilnius, Georgia and Moldova were made to sign an association agreement with the EU, while for Ukraine, whose president refused to sign, the Maidan protests were organized, culminating in a coup d'état…After the seizure of power in Kiev by pro-Western forces, Petro Poroshenko signed the association agreement with the EU without preconditions."

© AFP 2020 / JANEK SKARZYNSKI
Leaders pose for a group picture at the fourth European Union (EU) Eastern Partnership Summit in Riga, on May 22, 2015
© Sputnik / Andrei Aleksandrov
Belarus Envoy to Russia Says Union State Project 'Most Advanced' Post-Soviet Integration Bloc
The catastrophic consequences of the Eastern Partnership for Ukraine are absolutely clear, in Lepekhin's view. "This project is factually a political corpse, and today, only Georgia continues to play along." In Moldova, European integrators lost last year's presidential elections. Armenia and Azerbaijan have essentially rejected the program's conditions for accession, although they continue to maintain 'warm' relations with European officials as a matter of courtesy.

In this context, the analyst noted, Belarus's on-again off-again participation in the EU's integration projects is concerning. For Poland, Germany and Lithuania, Belarus is seen "just like Ukraine – i.e. as a Trojan horse in the new post-Soviet alliance surrounding Moscow."

"The transformation of Minsk, following Kiev, into an instrument of anti-Russian forces – this is the real goal of the Eastern Partnership, and one actively supported by the nationalist Westernizers being nurtured in these countries," Lepekhin warned. Brussels and NATO-affiliated structures are openly working not only to try to transform Belarus into a buffer space between the EU and Russia, but to "drag the country into their sphere of influence using technologies being used today in Montenegro, Macedonia and Georgia."

"It's also clear," the journalist noted, "why Belarus is becoming more and more involved in pro-European media, educational and other projects, which bit-by-bit wash out from Belarusian young people the truth about their national history, and about the history of European fascism as well."

"But what can Minsk counterpose to the sophisticated and systemic pressure from the followers of Zbignew Brzezinski?" Lepekhin asked. For a start, he noted, "it is necessary to recognize that unlike Serbia, which faces a harsh and hostile environment, Belarus is in an almost ideal position. Thanks to its alliance with Russia, it does not need to fear another military invasion from the West. The Belarusians have at their disposal a huge Russian market."

© AP Photo / Darko Vojinovic
What Hides Behind Russian Center in Serbia the US Calls a 'Base'
"And in general, Belarus today is an important system-forming element of the fledgling Eurasian civilization, transforming into one of the poles of a multipolar world. This means that a westernization of the republic would inevitably cause the erosion of its national idea, with the subsequent weakening of its national sovereignty."

"Under no circumstances must Belarus lose its unique civilizational space," the journalist stressed. "Neighboring Ukraine is a perfect example of how a young state with a powerful social, economic and cultural potential can lose its sovereignty in the space of just a few years after being fooled by neo-fascists hiding behind the mask of 'European values'."

"I am confident that most Belarusians understand that 'European integration', however attractive it may seem on first glance, is a path that would turn Belarus into a periphery of the European borderland states of Poland and Lithuania, who are themselves puppets to Washington. That is why Belarus celebrates its Independence Day on July 3, and understands sovereignty primarily as freedom from fascism and its modern-day incarnations," Lepekhin concluded.