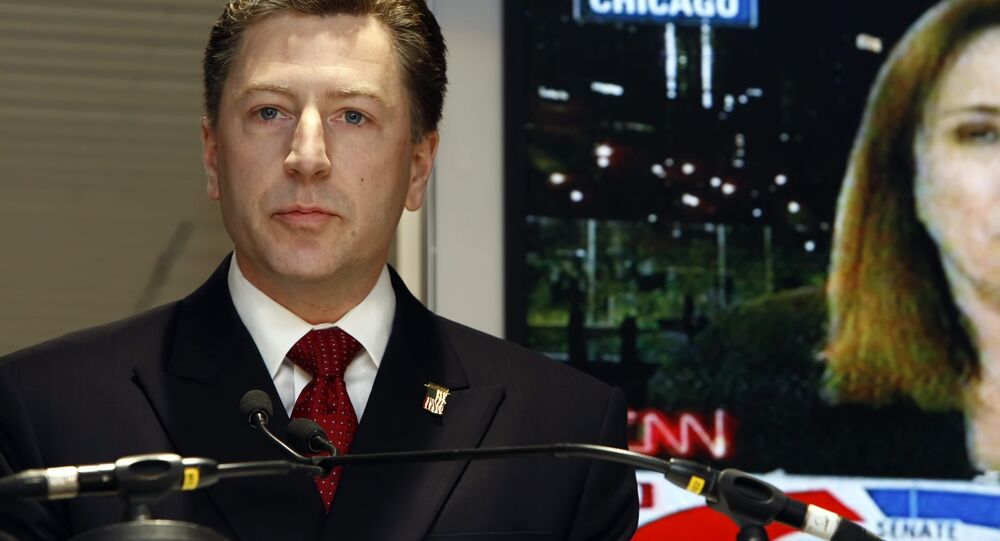 The US State Department has apparently found a replacement for Victoria 'Cookies' Nuland to coordinate Washington's Ukraine policy. Former CIA analyst, prominent neocon, and McCain Institute for International Leadership executive director Kurt Volker has been named the US Special Envoy to Ukraine to negotiate an end to that country's civil war.

US Secretary of State Rex Tillerson confirmed Volker's appointment as US Special Representative for Ukraine Negotiations on Friday, with the diplomat expected to spearhead US efforts to move forward on the implementation of the Minsk agreements – the ceasefire and peace plan signed by Ukraine, Russia, France and Germany in early 2015 in the Belarusian capital to try to bring the conflict in eastern Ukraine to an end.

© Sputnik / Mikhail Klimentyev
Tillerson: US Special Representative for Ukraine Volker Appointed Upon Putin Request
Tillerson added that the special representative on Ukraine was appointed following a request by Russian President Vladimir Putin. Volker, he said, "will draw on his decades of experience in the US Diplomatic Corps, both as a representative to NATO and also his time as a permanent political appointment."

But according to US and Russian observers, Volker's appointment casts doubt on whether Washington is really committed resolving the Ukraine crisis. Speaking to Sputnik, Ron Paul Institute for Peace and Prosperity executive director Daniel McAdams recalled that Volker's current position is head of the McCain Institute, a neo-conservative Washington-based think tank founded by fanatically anti-Russian Senator John McCain.

"Again, the solution to the Ukraine problem is for the United States to disengage and allow the countries involved to work out the issues. Ultimately, the people of eastern Ukraine should be able to decide their own fate," McAdams said.

"Formally, the post of special envoy for Ukraine was created for the first time, but in actuality, Volker is Victoria Nuland's successor," the journalist wrote. "The former assistant secretary of state for European and Eurasian affairs didn't have a formal position in Ukraine, either, but was remembered in the country, and not only for distributing cookies on Maidan Square" ahead of the 2014 coup.

© AP Photo / Andrew Kravchenko, Pool
U.S. Assistant Secretary for European and Eurasian Affairs Victoria Nuland and Ambassador to Ukraine Geoffrey Pyatt, offering cookies and (behind the scenes) political advice to Ukraine's Maidan activists and their leaders.
© Sputnik / Michael Klimentyev
The Meeting the World Waited For: What did Putin and Trump Manage to Agree Upon?
Volker, Rezchikov noted, will be charged with coordinating State Department efforts on settling the Ukrainian conflict, and will probably hold discussions with Russian presidential aide Vladislav Surkov, with whom Nuland too previously negotiated, at some point.

Russia had been waiting for Washington to fill the role of Ukraine negotiator since January, when Nuland and several other senior State Department officials resigned, but probably didn't expect one prominent neocon to be replaced by another.

Volker, 55, began his career in the Central Intelligence Agency, serving for two years between 1986 and 1988. In 1988, he joined the US State Department as a Foreign Service officer. In the late 1990s, he became First Secretary of the US Mission to NATO. He was appointed Permanent Representative to the alliance in July 2008 by George W. Bush, and served until May 2009.

© Sputnik / Valeriy Melnikov
Ukraine Military Shells Civilian Infrastructure in Donbass as War Crimes Rage On
BGR Group founder Ed Rogers had been a prominent Trump critic, and was one of the leaders of the 'Never Trump' movement. Volker, however, was one of the few neocons who did not publically oppose Trump ahead of the 2016 election.

In 2012, Volker was tapped for the job of executive director of the McCain Institute for International Leadership, a non-profit think tank created on Senator John McCain's initiative that same year. Volker had earlier served as legislative fellow on McCain's senatorial staff between 1997 and 1998.

The McCain Institute, a hub of neoconservative thought well-known for its lobbying of hawkish foreign policy, has been reported to have taken donations from George Soros, the Rothschild family, the National Iranian American Council, and the Saudi Embassy. Last year, Senator McCain tried to distance himself from the Institute, saying he had "nothing to do with it" beyond the namesake, even though it was founded with an $8.7 million donation of unused funds from the senator's 2008 presidential run.

According to Rezchikov, the true implications of Volker's appointment as special envoy can be guessed from the reception he has seen from Kiev. The journalist recalled that Ukrainian President Petro Poroshenko ecstatically welcomed the appointment on Twitter, going so far as to declare that the US decision was made "following our arrangements."

Welcome the decision of the US Administration to appoint Kurt Volker a Special representative for Ukraine, following our arrangements

Important & timely move in the interests of ending Russian aggression and restoration of Ukraine's territorial integrity, including Crimea

Speaking to Vzglyad, Mikhail Pogrebinsky, the head of the Kiev Center of Political Studies and Conflictology, lamented that based on a consideration of Volker's background, "a less suitable candidate for the search for compromise would be hard to find."

"The State Department is appointing someone who is officially registered as a lobbyist for Ukraine to search for compromise. It follows that this will mean a strengthening of the Ukrainian position in the negotiations process. All of this is not conducive to substantive negotiations being held with Volker," Pogrebinsky said.

The only chance, Pogrebinsky noted, is if President Donald Trump gives the envoy a specific assignment, with the diplomat "simply forced to carry out this task."

For his part, US politics watcher Viktor Olevich told Vzglyad that Volker's appointment to take Nuland's place in Ukraine suggests that the Trump administration does not plan to "seriously change its approach to the Ukraine issue."