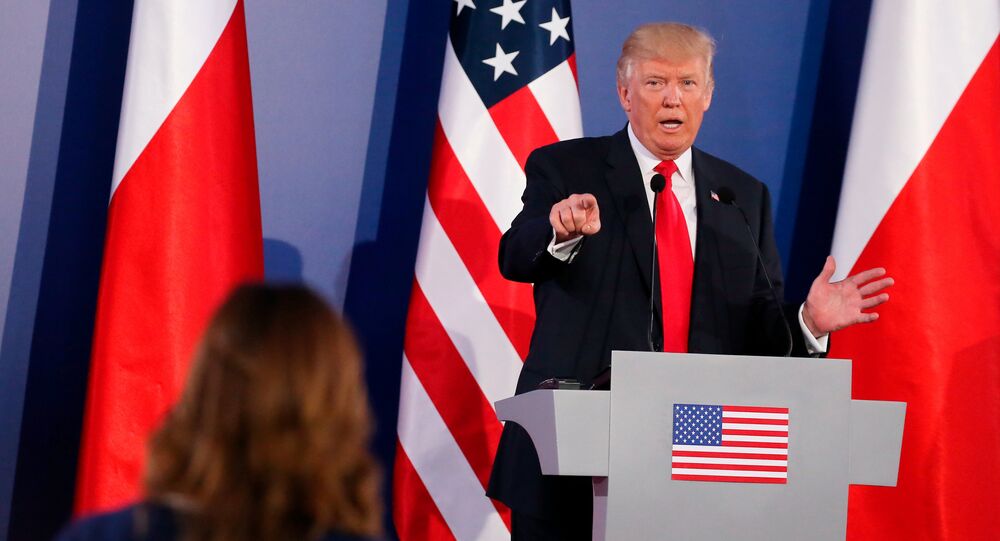 Trump in Poland: ‘Western Civilization’ Must Defend its Values

US President Trump delivered a speech in Poland Thursday on the need to fight the enemies of Western civilization – but will his words benefit the US or merely embolden the extreme right wing in Europe?

Radio Sputnik’s Loud and Clear spoke with Alexander Mercouris, editor-in-chief of the Duran, about Trump’s speech and whether it will have the positive impact on Europe and the US that he desires.

​During his address Trump posed several questions. "The fundamental question of our time is whether the West has the will to survive,” he said. “Do we have the confidence in our values to defend them at any cost? Do we have enough respect for our citizens to protect our borders? Do we have the desire and the courage to preserve our civilization in the face of those who would subvert and destroy it?"

Mercouris called this "incendiary rhetoric" that "aligns Trump with the Polish leadership and other Eastern European leaders" who consistently oppose taking in large numbers of immigrants, often despite explicit EU requirements to do so, with rhetoric "about defending Christian values and defending Western values." These positions stand in contrast to "the more modern, liberal order that has developed in Europe, which places a greater stress on multiculturalism and internationalism and secularism …."

Trump called on Russia to "cease its destabilizing activities in Ukraine and elsewhere, and its support for hostile regimes, including Syria and Iran," urging Moscow to "join the community of responsible nations in our fight against common enemies and in defense of civilization itself."

The editor said Trump’s statements and the opinions they seem to reflect are based on a "complete misunderstanding of Russian policy," suggesting that Moscow, China and nations like Syria and North Korea would never be amenable to such a pro-Western agenda.

According to Mercouris, Trump feels that he can still cajole Russia into joining his "clash of civilizations" effort, but says this a "completely forlorn hope."

Trump made some questionable comments about the Warsaw Uprising of 1944, according to Mercouris. "In the summer of 1944, the Nazi and Soviet armies were preparing for a terrible bloody battle right here in Warsaw. Amid that hell on Earth the citizens of Poland rose up to defend their homeland … This monument reminds us that more than 150,000 Poles died during that desperate struggle to overthrow oppression," Trump said.

Mercouris called this "a complete fiction of history," pointing out that "if the Soviet Union hadn’t liberated Poland, it probably wouldn’t exist."

"So to make that kind of analogy, to say the Soviet Union and Nazi Germany were equally evil and equally responsible for Polish problems, is not only completely wrong and completely untrue, and has no historical or factual basis, but it also plays into the hands of some very dangerous nationalistic people in Poland who have been trying very aggressively to pursue that kind of agenda," he pointed out.

Ukrainian Migrants: The Time Bomb That Could Tear Poland Apart