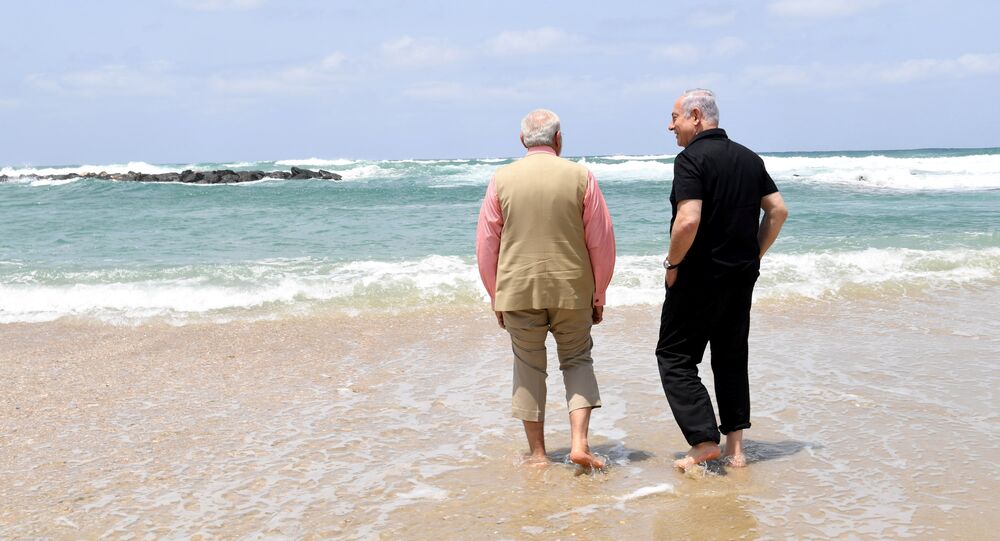 When Narendra Modi became the first Indian prime minister to set foot in Israel, visit to the Jewish state did not include a visit to the Palestinian Territories, suggesting a change in New Delhi’s policy. Experts maintain, however, that Indian support for Palestinians hasn’t ended.

During the Cold War, India was reluctant to have open relations with Israel, and leaned in favor of the Palestinians. New Delhi recognized Israel in 1950, but established formal ties with Tel Aviv only in 1992. Since then, the pace of ties between the two nations has been phenomenal not only in defense, but across a spectrum of interests.

However, the first visit of an Indian prime minister to Israel not including Palestine hasn't gone down well with the PNA.

"It is a very serious diplomatic mistake and it should not have happened, especially from the prime minister of India, whose people are absolutely supportive of the Palestinian cause… this right-wing government in India has been changing the official and traditional position regarding the Palestinian issue," RFI quoted Mustapha Barguti, a member of the Palestinian parliament and leader of the political movement Palestinian National Initiative, as saying.

Not only that, India under Modi has abstained from taking a clear stand against Israel on human rights violation resolutions within the United Nations General Assembly, which has created the perception that New Delhi's stance is shifting. Historically, India has been one of the main supporters of the Palestinian movement.

Officially, there has been no change in India's support for Palestine. In May, Modi hosted Palestinian President Mahmoud Abbas for a state dinner in New Delhi and reiterated the country's commitment to a two-state solution and the Palestinian cause.

"We will continue to work with the Palestinians because we do support their cause. But at the same time, we want to keep our relations with Israel independent of their relationship with Palestine," the Times of Israel quoted Pavan Kapoor, Indian ambassador to Israel, in an interview.

© REUTERS / Ronen Zvulun
Start as You Mean to Continue: Israel Abducts 24 Palestinians in the West Bank

Experts say what has changed under the Modi government is that India has shed its hesitation to celebrate ties with Tel Aviv.

"Officially, New Delhi continues to support the Palestinian cause as… Modi said during President Mahmoud Abbas' visit in May. But Modi's visit to Israel formally heralds a new chapter in bilateral ties and coming of age. India has shed its reluctance to celebrate its ties with Israel, while still cultivating strong ties with Arab regimes. A cornerstone of this cooperation is addressing the formidable threat of Islamic terrorism. And Tel Aviv has repeatedly announced how they see no difference between Lashkar-e-Taiba in Pakistan and Hamas groups operating in Palestine and inside Israel. Israel has often said that they seek no reciprocity from New Delhi. But Modi is surely making a gesture by not visiting the Palestinian National Authority's office in Ramallah and staying put all three days in Tel Aviv," Swaran Singh, a professor at the School of International Studies at New Delhi's Jawaharlal Nehru University, told Sputnik.