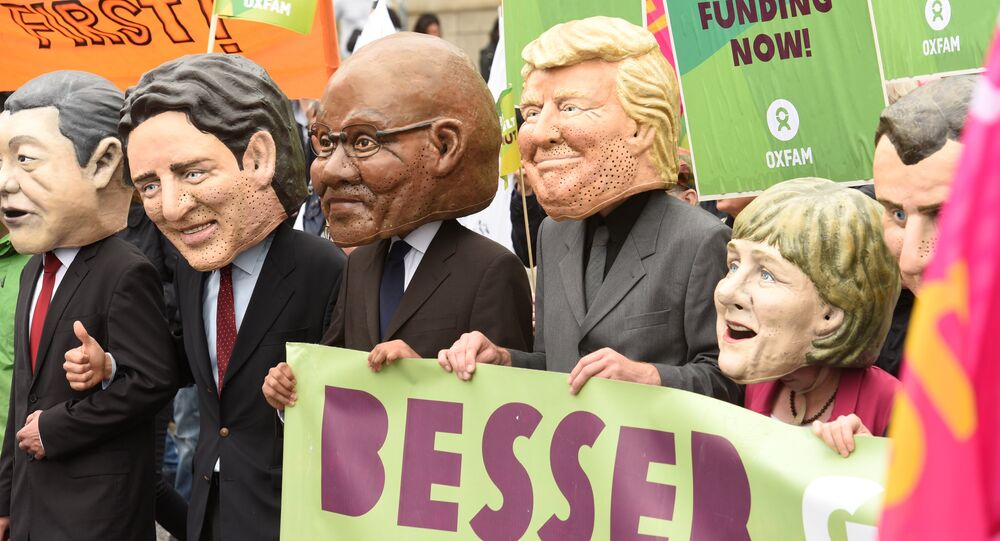 Uneasy G20: How US Managed to Alienate the Major Powers Ahead of the Summit

The upcoming G20 meeting in Hamburg is unlikely to be a walk in the park for world's major powers; Washington is seemingly instigating tensions in the Middle East, Europe and Asia. To solve the problem, one should find out who is pulling the strings of the US government apparatus, geopolitical analyst Gilbert Mercier told Sputnik.

© REUTERS / SANA
'Assad Mustn't Go': How Qatar, France, Germany 'Wised Up in Regard to Syria'
On July 7-8, the German city of Hamburg will host the G20, an international forum for the governments of the world's 20 largest economies. It appears, however, that the upcoming meeting will be no cakewalk for Trump's team, given the tensions simmering in Asia-Pacific, the Middle East and Europe.

One key feature of the upcoming forum is that it will host the first ever meeting between Russian President Vladimir Putin and his American counterpart Donald Trump. Many pin their hopes on the event, expecting that it will help settle regional crises.

Speaking to Sputnik, Gilbert Mercier, author of "The Orwellian Empire," editor-in-chief of News Junkie Post, and geopolitical analyst, underscored that the G20 meeting in Hamburg between Putin and Trump "might not offer many solutions unless the Russian leader'schedule side talks with critical people in the Trump administration."

"As opposed to Mr. Putin, who is clearly in charge of his administration, Mr. Trump makes a point of throwing his weight around and acting like he is in charge, [however] real policy decisions seem to come alternatively from a weaker State Department but mostly from the Pentagon," Mercier told Sputnik.

He referred to the increased activity of the Department of Defense, especially regarding Afghanistan, Yemen, Somalia and Syria.

"One thing that the State Department, the Pentagon and the White House have in common is frantic weapon sale activity," the analyst said, "Secretary of State Tillerson recently arranged the sale of $1.42 billion in weapons to Taiwan, which angered China, and despite the White House siding with Saudi Arabia, Secretary of Defense James 'Mad Dog' Mattis sold $12 billion worth of weapons to Qatar."

Washington Has a Finger in Every Pie

© Sputnik / Valeriy Melnikov
Collateral Damage or Gas Attack? Why WH's Assad Accusations are Flawed
It seems that the US leadership is deliberately fanning the flames in the Middle East and Asia.

According to the geopolitical analyst, Washington has played a role in both the ongoing Qatari diplomatic crisis and the six-year long Syrian conflict.

"As for Syria, at least at first, it was a joint venture between Saudi Arabia, Qatar, the UAE as well as the United States and its European vassals, namely the UK, France, and Germany, with the blessing of Israel, in what I called at the time an 'unholy alliance to wreck and exploit'," Mercier elaborated.

"Washington's neocon agenda <…> was the toppling of Bashar al-Assad, which was meant to weaken the influence of Iran and Russia. That was the main goal," Mercier told Sputnik, stressing that this US policy is "still very much in effect today."

However, cracks have already appeared within the aforementioned "alliance" with Qatar; France and Germany have seemingly softened their stance toward Bashar al-Assad, the analyst pointed out.

Meanwhile, on the other side of the world, the Trump administration continues to tease the Chinese "dragon."

Ahead of the G20, Trump slammed Beijing for its seeming unwillingness to crack down on North Korea following Pyongyang's recent missile test. Simultaneously, speculations about an increase of import tariffs on Chinese goods emerged again in the US, while the USS Stethem entered waters claimed by Beijing in the South China Sea on July 2.

Commenting on these developments, Petr Mozias, an economist from the National Research University's Higher School of Economics, underscored that the Trump administration has chosen the wrong way to deal with the Chinese.

"[The Chinese] will not do anything under pressure, especially if it's imposed by Western countries. In their culture, this behavior is called a 'loss of face, and ' there is nothing worse than this," the academic told RIA Novosti.

© AP Photo / Martin Meissner
The Final Straw: Germany Mulling Over Sanctions… This Time Against the US
Meanwhile, the US Congress continues to pour gasoline on the fire: the much-discussed anti-Russian sanctions bill has recently been put back on track after being reconsidered by the Senate. Once entering into force, the legislation will seriously complicate EU-Russian energy cooperation, most notably the joint Nord Stream 2 initiative.

The bill has already provoked a storm of criticism from Germany and Austria. Moreover, Berlin signaled that it may go even so far as to enforce counter-measures against the US if the legislation comes into effect.

"Germany, Austria and France have already strongly said that they will not be bullied out of the Nord Stream 2 pipeline project with Russia's Gazprom on behalf of Washington's whims. This is a concrete example of what Europeans can do to reclaim their sovereignty from the United States, and this could include putting a European military force, operating outside of NATO, on the fast track," Mercier told Sputnik, commenting on the issue.

It appears that at the G20 summit, the Trump administration may face resistance from the major global economies.

"The main problem that the international community must solve is to figure out who is really in charge of the US government apparatus, and then apply, within reason, the appropriate pressure," the geopolitical analyst noted.

"Recently Russian foreign minister Lavrov had a meeting with 94-years-old Henry Kissinger, who has advised  Donald Trump at least once officially, perhaps Lavrov did get a glimpse on the enigma: who runs the US administration if anyone, and what should be expected? In the Trump era it is 'shoot first, talk later,' the international community must find the right people to talk to in order to avoid worst case scenarios," Mercier concluded.

G20 Police, Accused of Wild Debauchery, Cleared of Any and All Wrongdoing