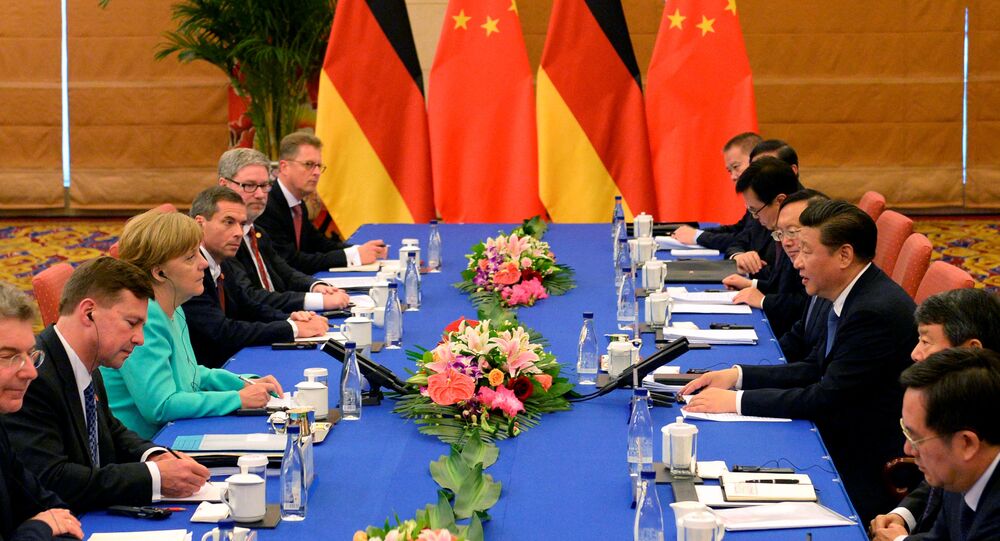 © Photo : Feng Yongbin / chinadaily.com.cn
Germany China's Most Important Partner Within EU – Chinese Premier
On the eve of Jinping's visit to Germany, China handed two pandas over to the Berlin Zoo. The transfer of these "goodwill ambassadors" to foreign states is a trademark Chinese political sign, reflecting its warm attitude to its partners.

China and Germany are major trade partners. They cooperate in many areas, including technology and innovation. Many analysts are confident that China and Germany will further strengthen ties between their IT companies.

At the same time, the issue of providing free access of capital and services to each other's markets has become a very painful topic in bilateral cooperation, Vladislav Belov, deputy director of the Institute of Europe at the Russian Academy of Sciences said in an interview with Sputnik.

The expert expressed skepticism with regard to the parties' chances for a breakthrough in this regard.

"The subject of these negotiations will be Chinese protectionism. Although China, on the contrary, believes that it is Germany which pursues a protectionist policy, because it does not give access to Chinese investors [to their strategic sectors]. It will be a hard standoff, where, I am sure, the Chinese side won't achieve anything, while the German side will also defend its interests in the pre-election period. Therefore, we can't expect any mutual concessions. I don't see a common denominator, which would unite the German and Chinese positions on this issue. They are too different, although, on the other hand, this won't prevent the growth of bilateral trade anyway," Belov said.

At the same time, research fellow at the Center for Financial Studies at the Chinese People's University Liu Yang, believes that Xi Jinping's talks with German partners would help both sides to dispel all misunderstandings.