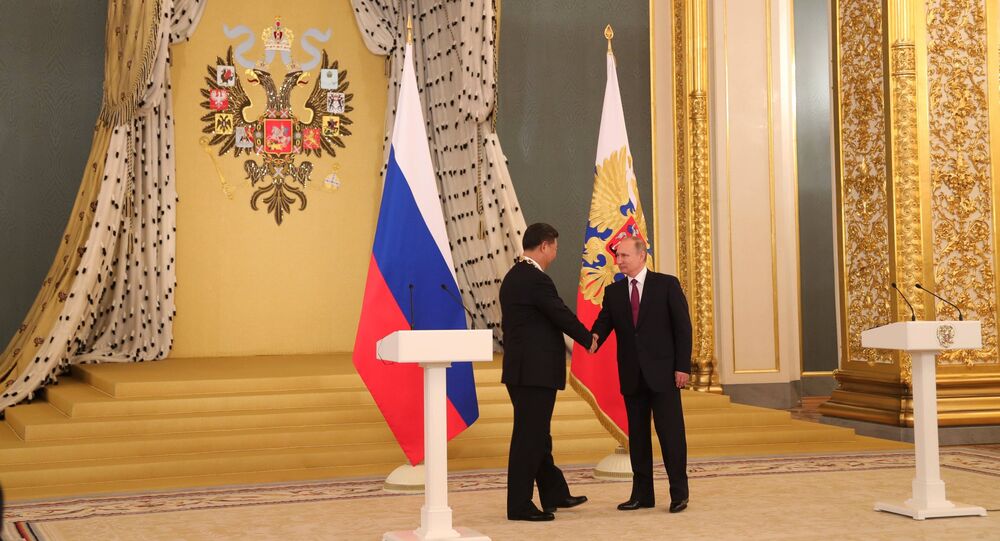 Russia looked to be focused on boosting economic ties with China, while Beijing seemed to highlight common interests in geopolitics during the official visit of Chinese President Xi Jinping to Russia this week, experts told Sputnik.

MOSCOW (Sputnik), Tommy Yang — After meeting Russian President Vladimir Putin in Moscow on Tuesday, his 23rd meeting with the Russian leader after taking office as the Chinese president in 2013, Xi stressed he agreed with Putin that "today Chinese-Russian relations are the best they have ever been."

© AFP 2020 / HOW HWEE YOUNG
Strategic Rapprochement: NATO Expansion Brings Russia, China Closer
However, in his speech at the joint press conference with Putin, the Chinese leader focused on the importance of two joint statements between to two countries on Further Expansion of Comprehensive Partnership and Strategic Cooperation and on the Current Status of Global Affairs and Important International Issues, as well as an Action Plan to Implement the Provisions of the Treaty on Good-Neighbourliness, Friendship and Cooperation for 2017–2020.

After briefly mentioning rapid growth in bilateral trade this year, Xi did not name any of the specific business deals both sides reached during his meeting with Putin. At the same time, the Russian president dedicated almost half of his speech to economic cooperation between Russia and China.

After the press conference, the Kremlin released a full list of commercial agreements signed between the two countries, while the Chinese Foreign Ministry did not include any of the specific projects in their statements regarding Xi’s visit to Russia.

The difference in expectations between Russia and China from their bilateral relations is understandable, political experts told Sputnik.

"China and Russia have different purposes when trying to build a strong partnership with each other. Beijing is looking for a strategic partner to resist pressure from Western countries such as the US or Japan, while Moscow focuses more on economic benefits amid Western sanctions and plunging global oil prices," Yang Shu, director of Central Asia Institute under Lanzhou University and deputy director of Sino-Russia Relations History Research Institute, said.

Despite China’s willingness to strengthen its strategic partnership with Russia, it is unlikely for Beijing to seek a military alliance with Moscow, the Lanzhou-based expert suggested.

"They do not have a common enemy or target. Most of the Chinese scholars who study Sino-Russia relations are against the idea of a military alliance between the two nations," Yang said.

While common interests in global geopolitics make Russia and China a perfect match for each other in strategic cooperation, stronger business ties depend on rules of the market economy, experts said.

© Sputnik / Alexei Druzhinin
North Korea One of 'Key Points' of Putin-Xi Talks in Moscow
For example, foreign ministries of China and Russia released a joint statement regarding to issues on the Korean Peninsula on Tuesday following the meeting between Xi and Putin. But major economic projects between the two nations mostly stayed within prominent state-owned-enterprises such as Gazprom, Rosneft and China National Petroleum Corporation.

The Shanghai-based expert explained that if there are substantial profits, private Chinese enterprises would be willing to do business with Russian companies without incentives or push by authorities in Beijing.

"Economic interests have been diversified in China. Private enterprises have become a big part of the Chinese economy. The enthusiasm of private Chinese enterprises (in doing business with Russia) has not been mobilized," he said.

© Sputnik / Sergey Guneev
Russia to Support China's 'One Belt, One Road' Initiative by All Means - Putin
Yang Shu, the Lanzhou-based expert, believes China has a lot of potential in helping Russia with development of the Far East region.

"The openness towards Chinese capital and labor in the Far East region of Russia is still very limited. How much more room there will be for Chinese businesses in the development of this region is a good indicator of improved understanding of China from the Russian side," he said.

In addition, military technology, especially advanced military equipment, is still an area China hopes to work closely with Russia in, according to experts.

"Under pressure from Western sanctions, advanced military technology is one of key export products for Russia," Li Chuanxun, a professor at Russia Studies Institute under Heilongjiang University in northeast China, told Sputnik.

Li added that Russia is also one of the few countries where China can import advanced military equipment from.