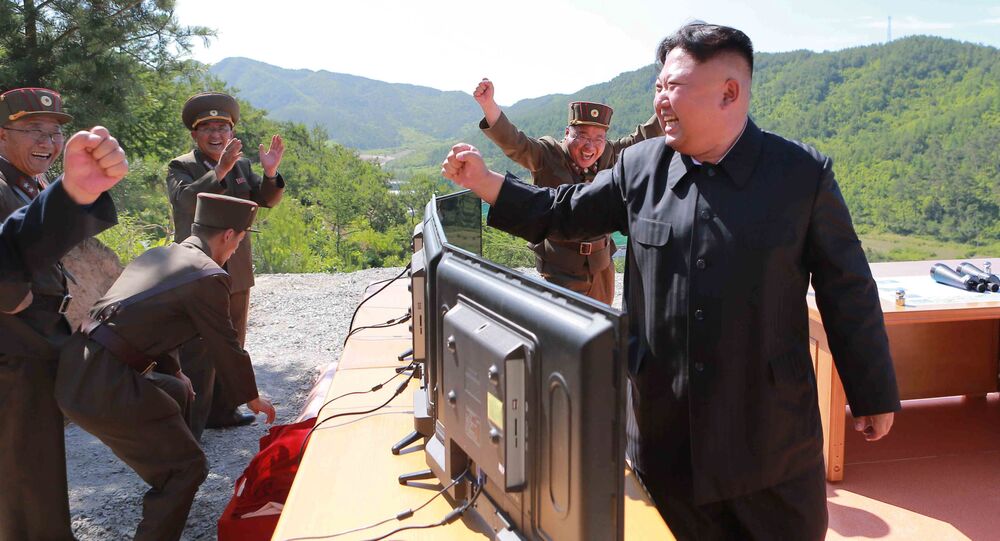 The Russian and Chinese foreign ministries adopted a joint statement following the talks of the countries’ leaders in Moscow on the issues of the Korean peninsula.

MOSCOW (Sputnik) – Russia and China called on North Korea to declare a moratorium on nuclear tests, while at the same time urging Washington and Seoul to refrain from holding joint drills.

"The sides suggest for North Korea, as a way of voluntary political settlement, to declare a moratorium on tests of nuclear explosive devices and test launches of ballistic missiles and for the United States and South Korea to refrain from carrying out large-scale joint exercises," the statement said.

© Sputnik / Michael Klimentyev
Putin: Russian, Chinese 'Foreign Policy Priority' is Korean Settlement (VIDEO)
Furthermore, the parties should "start negotiations and approve common principles of relations, including non-use of force, renunciation of violence, peaceful coexistence and intentions to make efforts for de-nuclearizing the Korean peninsula, aiming at a complex settlement of all issues, including the nuclear one," the statement said.

Russia and China are seriously concerned about the development of the situation on the Korean Peninsula, and are calling on all concerned sides to show restraint and refrain from provocative actions, according to the joint statement.

"The sides express serious concern over the development of the situation on the Korean Peninsula and around it. The escalation of military and political tension in the region, which is fraught with an armed conflict, requires the international community to take collective measures to resolve the situation peacefully through dialogue and consultations," the statement said.

© Sputnik / Alexei Druzhinin
North Korea One of 'Key Points' of Putin-Xi Talks in Moscow
"The parties oppose any statements and actions leading to tension and aggravation of contradictions, call upon all the states involved to show restraint, to give up provocative actions and bellicose rhetoric, to demonstrate readiness for dialogue without preconditions, to jointly make active efforts to relieve tensions," it said.

Russia and China "are committed to the tasks of denuclearization of the Korean peninsula and stress that dialogue and consultations are the only effective way to resolve the issues of the North Korean peninsula," the statement read.

Moscow and Beijng also called on the international community to support the initiative as one that could open "a real way toward settling the issues of the Korean peninsula," the statement added.

Russia and China are against the military presence of outside forces in Northeast Asia under the pretext of countering North Korea's missile strikes, the statement said.

© REUTERS / Carlos Barria
THAAD and Pyongyang: How Trump Achieved Four Key Concessions From S Korea
Russia and China oppose the deployment of US THAAD missile defense systems in Northeast Asia, the parties have agreed on measures to protect their security interests.

"The sides reaffirm that the deployment of THAAD missile defense systems in Northeast Asia seriously damages the interests of strategic security of regional states, including Russia and China, does not contribute to the goals of denuclearization of the Korean peninsula, nor does it contribute to peace and stability in the region."

The document also notes that "Russia and China oppose the deployment of these systems, call upon the countries concerned to immediately stop and abolish this deployment, and agreed to take the necessary measures to protect the interests of the two countries in the security sphere, as well as to ensure strategic balance in the region."