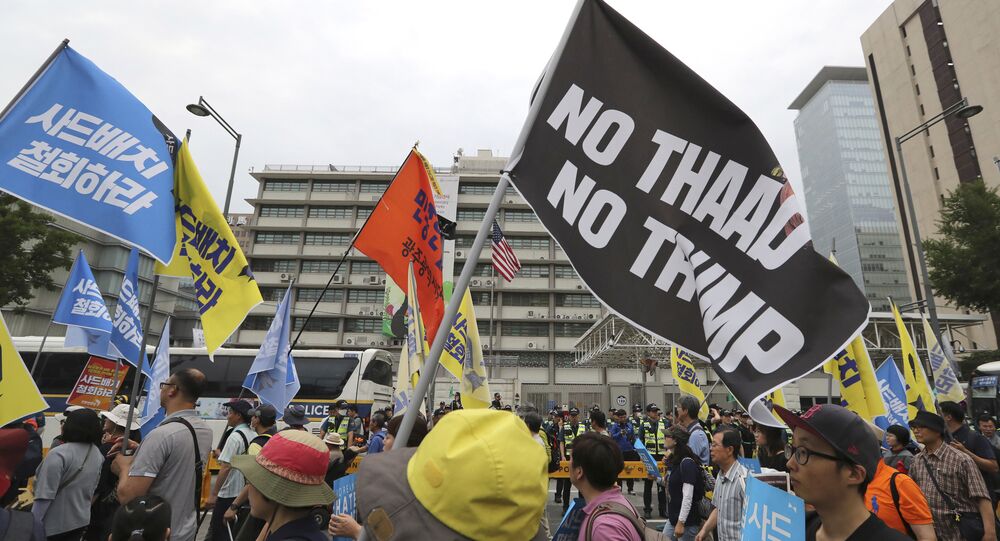 US Embassy in Seoul Lodges Protest Over ‘Problematic’ Anti-THAAD Rally

In response to a rally held last week calling for the withdrawal of the US’ Terminal High Altitude Area Defense (THAAD) missile defense system, the US Embassy in Seoul lodged a protest Wednesday with the South Korean government.

More than 2,000 protesters representing 90 civic groups formed a human chain around the embassy building for about 19 minutes during the Saturday demonstration against the anti-missile system installed in Seongju County, North Gyeongsang Province. The demonstration was a tactic the embassy called “problematic” in a letter sent to the Ministry of Foreign Affairs.

"The deployment of THAAD, which is unnecessary for the defense of the Korean Peninsula, should be pulled back," Yonhap News Agency quoted one speaker at the rally saying. "The South Korea-US summit to come next week should be a venue where the review of the THAAD deployment should be assured."

There was minimal police security during the action, the first rally of its kind since May, when Moon Jae-in was elected president, the Korea Times reported.

The embassy’s objection comes days ahead of a planned meeting between liberal South Korean President Moon Jae-in and US President Donald Trump, set to take place in Washington this weekend.

Though Seoul has said that THAAD is not on the official list of topics for the two presidents to discuss, some feel Trump’s unpredictability makes this assertion uncertain.

Moon has taken issue with how the buildup of the THAAD has taken place, accusing the South Korean Defense Ministry, which he inherited from his conservative predecessor, of adding four launchers to the battery without informing him or the public.

He ordered a probe into the matter that could have suspended activity on THAAD for up to a year, but the ministry has since clarified that Seoul intends to honor the "alliance decision" to deploy the system, promising to be more transparent of about domestic political matters.