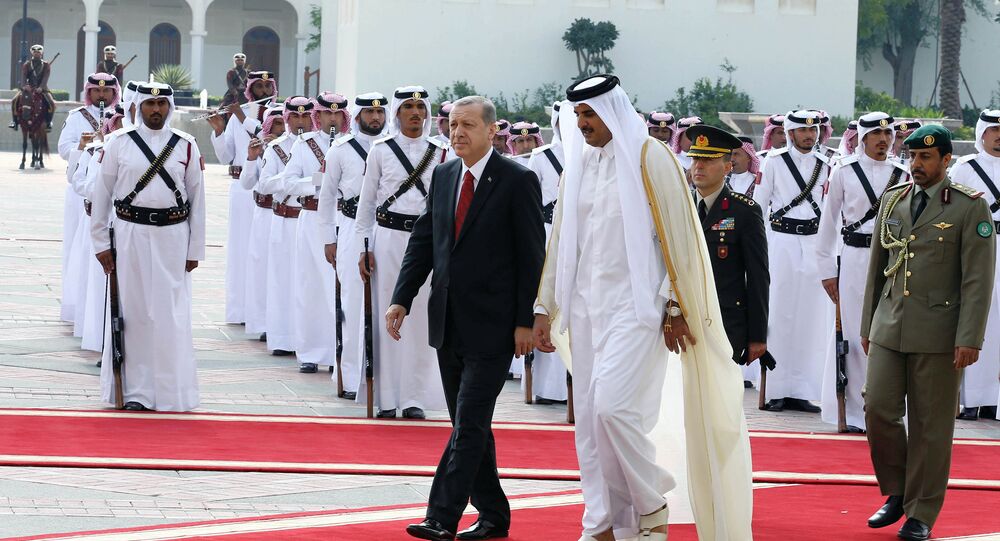 Turkey has stepped in to protect Doha amid the Qatari diplomatic crisis, and with good reason political scientist Gevorg Mirzayan writes. In his op-ed for RIA Novosti the political scientist shed some light on what is behind Ankara's decision to lend Qatar its helping hand.

© REUTERS / Qatar News Agency
Qatar Could Restore Peace With Neighbors Soon, But 'They Won't Forget Turkey's Take on the Crisis'
Turkey's involvement in the Qatari crisis may change the established balance of power in the Middle Eastern region, Gevorg Mirzayan, associate professor at the Department of Political Sciences at the Finance University of the Russian Government, notes in his recent op-ed for RIA Novosti.

After Ankara's proposal to settle the simmering crisis between Qatar and its Gulf neighbors had been refuted by the Saudi coalition, the Turkish leadership decided to step in and protect Doha.

On Friday, Saudi Arabia, Bahrain, the United Arab Emirates and Egypt, which continue to maintain the blockade of the Gulf realm, handed a 13-point ultimatum to Qatar. The ultimatum stipulates that Qatar, among other things, must cut its ties with Iran, close a Turkish military base on its soil and shut down Al Jazeera and its affiliates.

Doha must also pay financial compensation, and end suspected financing of terrorism and hand over persons designated as terrorists by Saudi Arabia, the United Arab Emirates, Bahrain and Egypt.

"For the Al Thani dynasty which is ruling Qatar, these demands expressed in such a manner are humiliating and impossible," Mirzayan wrote, adding that the current economic blockade doesn't pose a significant threat to Qatar.

"The volume of Qatari foreign investments amount to $335 billion (the country is among the world's top ten investors). In addition, due to gas sales, Qatar can secure itself economically," the scholar stressed.

What really prompts the House of Thani fears is the possibility of a military coup, Mirzayan noted, citing Fawaz A. Gerges of the London School of Economics and Political Science (LSE).

© REUTERS / Bandar Algaloud/Courtesy of Saudi Royal Court
Saudi Arabia's Crown Prince Mohammed bin Salman sits during an allegiance pledging ceremony in Mecca, Saudi Arabia June 21, 2017
© AP Photo / Yasin Bulbul, Presidential Press Service, Pool
Saudis Demand Turkey Pull Troops From Qatar, Erdogan Says No Way
The problem is that out of 2.5 million of people living in Qatar only 300,000 are the realm's citizens, while the others are guest workers — in the event of the internal turmoil they could seriously undermine the country's stability.

After Ankara's proposal to broker a deal between Doha and Riyadh was reportedly refuted by Saudi Prince Mohammad bin Salman, Turkey qualified the isolation of Qatar as "inhuman" and lent its helping hand to Doha.

"According to Turkish Minister of Economy Nihat Zeybekci, his country supplied almost 5,000 tons of food to Qatar by air. 'Ankara can cover all the humanitarian needs of Qatar,' he said. In general, according to the West-Mediterranean Association of Exporters, between May 1 and June 15, the volume of Turkish fruit and vegetable exports to Qatar has grown by 724% compared to the same period last year with a value of about $380 million," Mirzayan wrote.

© Sputnik / Valery Melnikov
Saudi Arabia 'Simply Unable to Open a Military Front Against Qatar'
What is more important is that Ankara is ready to protect Doha militarily, he stressed.

"Ankara has already sent two dozen soldiers to Doha," the scholar noted adding that there are now over 100 Turkish military servicemen in the country.

"In the future, the territory of the state may host several thousand Turkish soldiers. It may well help the authorities of Qatar to cope with the riots, as well as with a possible coup — both palace and military," he pointed out.

While the Turkish opposition has voiced its discontent with Ankara's decision, insisting that Turkey should remain neutral in this Gulf conflict, the Turkish has good reason to meddle in the Qatari affairs.

"First, [Turkish President Recep Tayyip Erdogan] is paying off its debts, both economic and military," Mirzayan noted referring to the rumor that Al-Thani sent 150 special operations troops to Erdogan following the attempted coup.

"Second, Erdogan is defending a loyal ally, with whom he is working hand in hand in Syria, North Africa, and with whom, until recently, he supported the Muslim Brotherhood regime in Egypt," the scholar continued.

"Third, Ankara hopes to fill the political and power vacuum in the Middle East caused by the collapse of Iraq and exacerbated by the weakening of Egypt and the outbreak of the civil war in Syria," Mirzayan added, suggesting that Qatar is now unlikely to further postpone the establishment of the Turkish military base on its territory.

"Finally, Ankara understands that the defeat of the Gulf countries in their conflict with Qatar (which will happen in case the emirate survives) will only expand Turkey's room for maneuver [in the region] due to the weakening of Saudi Arabia," he stressed.

Predictably, Turkey's decision to support Qatar has prompted dissatisfaction among the Arab proponents of Doha's isolation.

According to Mirzayan, the Gulf realms could use a number of economic measures to exert pressure on Ankara: for instance, the United Arab Emirates is one of the largest investors in Turkey's economy.

What's worse, the Arab states may go ballistic and complain to Washington about Turkey "being nosy," the scholar believes.

"Ankara and Washington have already complicated relations, in particular, because of the US support of the Syrian Kurds," he pointed out.

So, will Erdogan risk opposing the US if Washington takes the side of against Qatar and its friends?

"If the answer is yes, [Erdogan] will soon understand what the international isolation truly means," Mirzayan noted.