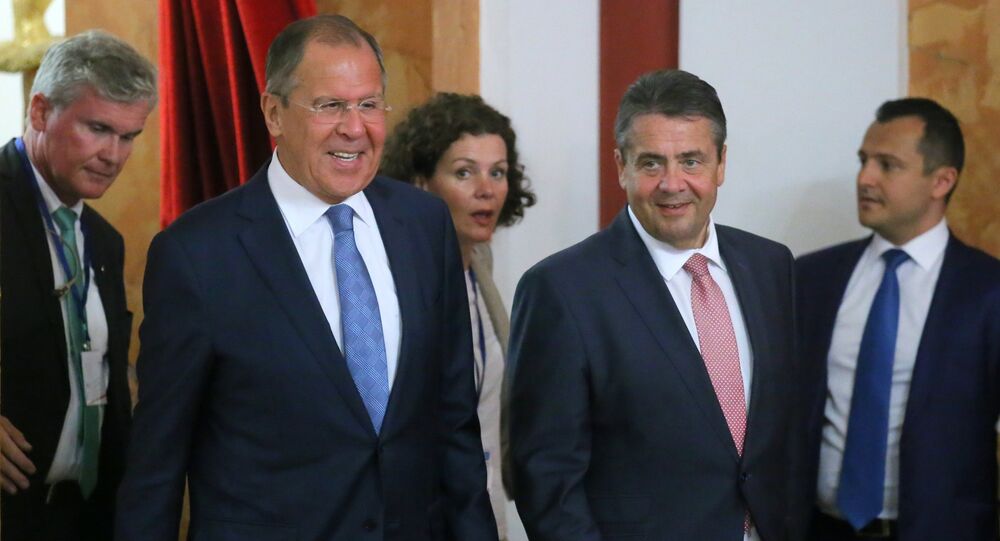 Russian Foreign Minister Sergei Lavrov and German Vice-Chancellor Sigmar Gabriel are holding a joint press conference in Krasnodar on Wednesday, June 28, following the opening ceremony of the 14th conference of partner cities of Germany and Russia.

In his opening address, Lavrov said that Moscow and Berlin may develop their bilateral agenda without the influence of political conjuncture.

"We've had many positive examples of cooperation. These should be used to form a new, unifying <…> bilateral agenda that would not depend on the ever-changing political environment," Lavrov said, adding that this agenda would have to help bring back strategic partnership to the bilateral relations.

He added that Russia had sought and would seek to build relations with Germany on the basis of equality and account for each other's interests.

"In the current situation in Europe, when relations between our countries are experiencing, frankly speaking, not the best of times, such depoliticized cooperation is important to help in maintaining an atmosphere of trust and mutual understanding between peoples and countries," Lavrov said at the opening of a Russian-German conference in Krasnodar. "We are still open to close coordination of efforts in the interests of strengthening European security, for which our countries bear increased responsibility."

In his turn, Gabriel said that Germany would like to open a new, "positive" chapter in its relations with Russia.

Having delivered their opening statements, the two diplomats began the press conference.

Lavrov announced the beginning of a new cross-year between Russia and Germany, an initiative that aims to strengthen bilateral ties.

Gabriel stated that Berlin is convinced that both Syrian and Ukrainian conflicts could be settled. To achieve that, the "full potential of relations with Russia" must be used, Gabriel stressed.

Lavrov agreed with that statement, adding that "it is important to seek normalization of US-Russian dialogue" in order to resolve the conflicts in Ukraine and Syria.

When asked by a reported about the possible meeting between Russian President Putin and US President Trump on the sidelines of G20 summit, Lavrov said that Moscow "assumes" that such a meeting will take place. He said, however, that he is unaware of any plans of holding a Normandy Four talks at the summit.

"Regarding the 'Normandy Four'… At least I have not heard of such plans. There are statements that, in view of the results of the recent presidential elections in France, the election of a new president, there should be a contact, at least by phone. I think that the organizational issues are resolved by the appropriate protocol services," Lavrov said.

Talking about NATO and its presence in Europe, Lavrov pointed out that the increase of the alliance's military presence has been evident in those parts of Europe where there was an agreement against that.

Russia sees no difference between permanent and temporary deployment of NATO forces to Europe, Lavrov stressed. Moscow has long offered military experts to discuss the issues of balance of armaments in Europe, but NATO has been avoiding dialogue, Lavrov said.

"There are statistics, at least, no one has rejected it, we have presented it repeatedly and it says that NATO has heavily increased its presence in those parts of Europe in which it was agreed not to build up armed forces on a permanent basis. NATO says that this is done on the basis of rotation, constant rotation. Therefore, we do not see any difference between permanent deployment and rotational deployment in NATO's current plans," Lavrov told reporters.

Talking about NATO, Gabriel assured Lavrov that by ramping up its presence in the Baltics, NATO is not a danger to Russia.

"As far as the NATO presence in the Baltic states near Russia’s borders is concerned, as it was mentioned by [Russian Foreign Minister Sergey] Mr Lavrov, then our opinions differ substantially, but we must discuss them," Gabriel said at Russian-German conference, adding that "4,500 NATO troops in the Baltic states do not represent the potential for aggression against Russia."

Gabriel then pointed out that the first step in resolving the crisis in Eastern Ukraine must be achieving a lasting ceasefire.

He also asserted that Berlin ready to consider Russia's proposals on the INF treaty.

© REUTERS / Alaa Al-Faqir
'Groundless Statements' From US on Syria Could Top UN Security Council's Agenda
Replying to a reporter who asked about the claim made by the White House this week about alleged plans of Damascus for a chemical attack, Lavrov stressed that Russia will react to possible US provocations against the Syrian Army "proportionately and with dignity."

"We will react with dignity, proportionally to the real situation that may develop," Lavrov said at a press conference with his German counterpart Sigmar Gabriel. "I am following how experts in the United States are analyzing the situation with new reports of chemical attacks being allegedly prepared. Experts there say openly that it is very likely that such Washington’s warning could be used by extremists which could organize a provocation and blame it on the Syrian army."

Commenting on Nauert's statement on the secrecy of that intel, Lavrov said that he finds such claims "uninteresting."

"Russia is still trying to push for an OPCW mission to be sent to Syria's Khan Sheikhoun," Lavrov said, adding that Moscow hopes the situation around the incident will eventually be resolved.

© AFP 2021 / Jewel SAMAD
What's Behind US Statement on Damascus' 'Plans of Chemical Attack'
Moscow is not ruling out that the US' stance on the chemical incident in Syria or possible further incidents "may facilitate extremists using the situation for provocations," Lavrov said.

Earlier today, Russian Ministry of Foreign Affairs issued a statement slamming the allegations made by the White House as an "invitation" for terrorists to launch a provocation using chemical weapons.

It is important to prevent any chemical weapons use in Syria, regardless of who poses this threat, Gabriel said in his turn. He pointed out that Syrian President Assad had previously shown "the will to assist" in investigations of chemical incidents in Syria.

He also stressed the importance of negotiating with Assad, the sovereign leader of Syria, in order to settle the conflict.

Why US, German Interests Clash Over Anti-Russia Sanctions This Time