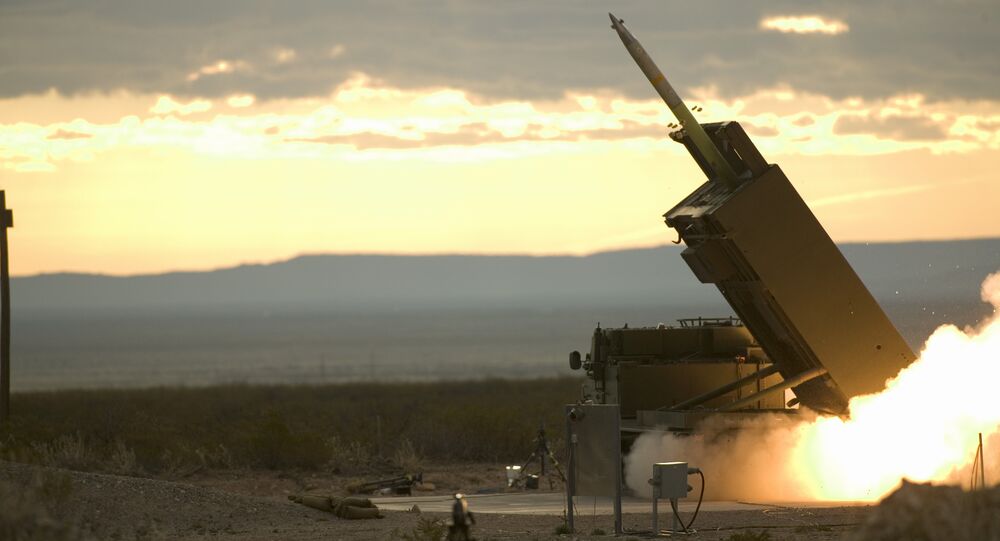 Using Russia's military modernization as a pretext to increase the US military budget, the Pentagon is boosting its short-range Army Tactical Missile Systems (ATACMS) capabilities. Sputnik contributor Andrei Kots noted that once deployed in Eastern Europe these weapons may pose a serious challenge to Russian military infrastructure.

NATO officials are ringing alarm bells over Russia's "growing military prowess"; speaking at a Politico Brussels Playbook breakfast chairman of the NATO Military Committee General Petr Pavel highlighted that the alliance was trying to thwart the development of Russia's military capabilities "on virtually every level."

"When it comes to capability there is no doubt that Russia is developing their capabilities both in conventional and nuclear components," the NATO official told the Politico event, admitting, however, that "when it comes to intent… we cannot clearly say that Russia has aggressive intents against NATO."

© REUTERS / Ints Kalnins
Peace on the Horizon? NATO Statements on Russia Indicate 'New Tendency'
According to Sputnik contributor Andrei Kots, the US efforts to modernize its short-range Army Tactical Missile Systems (ATACMS) could be regarded as an attempt to "counterbalance" Russia.

Indeed, during his speech at the Center for Strategic and International Studies in Washington, D.C. in May 2016, would-be National Security Adviser Lt. Gen. H.R. McMaster bemoaned the fact that the Russians have outstanding firepower capabilities, especially when it comes to short-range missile systems.

"When an Army fires unit arrives somewhere, it should be able to do surface-to-air, surface-to-surface, and shore-to-ship capabilities. We are developing that now and there are some really promising capabilities," he added.

The US Army Acquisition Support Center (USAASC) website says that the US army is determined to bolster its capabilities with new Long Range Precision Fires (LRPF) missiles.

"The LRPF will replace the Army Tactical Missile System (ATACMS) capability, which is impacted by the age of the ATACMS inventory and the cluster munition policy that removes all M39 and M39A1 ATACMS from the inventory after 2018," the website reads, adding that the new missiles would be able to reach targets at distances of more than 300 km (186 miles).

A $5.7 million risk-mitigation contract was awarded to Raytheon for the LRPF program, according to Scout Warrior's report published in September 2016.

"The emerging Long Range Precision Fires, slated to be operational by 2027, is being designed to destroy targets at distances up to 500 kilometers," the media outlet wrote, citing Dan O'Boyle, spokesman for Program Executive Office, Missiles & Space.

The crux of the matter is that the Intermediate-Range Nuclear Forces Treaty (INF Treaty) struck by the US and the USSR back in 1987 stipulated the elimination of both nuclear and conventional missiles, as well as their launchers, with ranges of 500-1,000 kilometers (310-620 miles) and 1,000-5,500 km (620-3,420 miles). However, the treaty did not cover sea-launched missiles.

"Raytheon's DeepStrike missile will integrate with the M270 MLRS and M142 HIMARS rocket launchers. The range and speed of the new missile will enable Army combat units to engage targets over vast geographic areas in high-threat environments," the site says.

© Sputnik / Grigoriy Sisoev
All Missile Units of Russia's Ground Forces to be Equipped With Iskander-M By 2020
Kots noted that the new modernized M57A1 ATACMS, developed by Lockheed Martin, has reportedly boosted its operational range from 165 km to 300-450 km.

The journalist noted that the new US weapons could be compared to Russia's Iskander short-range ballistic missile systems which can hit a target at a distance of 400-500 km (250-310 miles).

He drew attention to the fact that once deployed in Eastern Europe near Russia's borders these missile system would pose a significant challenge to the Russian military infrastructure and air-defense positions.

The journalist expressed his deep concerns over Monday's Politico report which said that US lawmakers had sent a proposal to the White House urging the administration to withdraw from the INF arms control treaty.

However, on Wednesday, Special Assistant to the President and National Security Council (NSC) Senior Director for Weapons of Mass Destruction and Counterproliferation Christopher Ford specified in his interview with Sputnik that Washington does not want to withdraw from the INF Treaty.

© Photo : militaryrussia.ru
Too Close for Comfort: Russia's Zircon 3M22 Surges Ahead in Hypersonic Missile Race
Meanwhile, Russia's military modernization and especially Moscow's successes in the development of hypersonic weapons is being used by the Pentagon as a pretext to bolster the US military budget.

"Recently, the American leadership says that it is necessary to revise the military budget in the upward direction," Vladislav Shurygin, military expert and deputy editor-in-chief of the newspaper Zavtra, told Radio Sputnik.

"Actually, it has been increasing [in the US] for all 80 years. But the Trump administration has adopted a course, strikingly similar to that of the Reagan era, to hyper-increase the military budget. Therefore, such phobias and 'horror stories' of Russian and Chinese super-weapons have [recently] emerged. Consequently, America, they say, needs to rearm," Shurygin stressed.

However, the problem is that the US efforts to bolster its military prowess may result in yet another arms race.

Speaking to Sputnik, political scientist and professor at the Academy of Military Sciences Sergei Sudakov, underscored that the US continues to implement the Prompt Global Strike (PGS) military concept, which envisages thwarting an adversary's potential to retaliate.

"The United States has consistently implemented the concept of a global disarming strike. It envisions a non-nuclear missile attack on the military infrastructure, air defense positions, command posts — everything that will give Russia a chance to inflict a retaliatory massive volley with nuclear weapons," Sudakov stressed.

America's new modernized ATACMS and LRPFs could be regarded as part of this strategy: Sudakov noted that if launched from Estonia's capital of Tallinn they could reach the Russian city of St. Petersburg.

"This can only be countered by building up [Russia's] air defenses on the western borders," the political scientist emphasized.