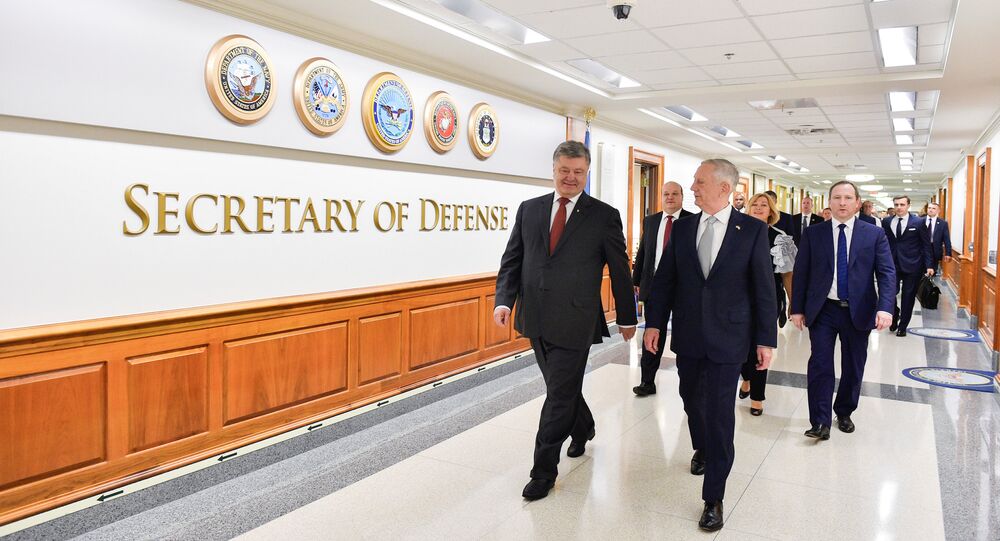 Riding on a wave of euphoria during his visit to Washington, Ukrainian President Petro Poroshenko may have taken things just a little too far, claiming he had dreamed of visiting the Pentagon since he was a private in the army. The only problem is – that army was the Soviet Army, and Poroshenko was serving in it at the height of the Cold War.

Speaking to US Secretary of Defense James Mattis at the US military headquarters building on Tuesday, Poroshenko said that it was a "great honor" for him and the entire Ukrainian delegation to be at the Pentagon.

"I told you that it is my dream from the time when I was in the army, to be in the Pentagon. And I think that we, together, during the last three years, do a great job. We, together with our American partners, create a new armed forces of Ukraine, which not existed two years ago," Poroshenko said, according to a transcript of the meeting published by the US DoD.

The Ukrainian leader did not clarify what he meant about 'dreaming' to "be in the Pentagon." Born in 1965, Poroshenko served in the Soviet Army (Sovetskaya Armiya) from 1984-1986, at a very tense period in Soviet-US relations. Poroshenko carried out his service in Soviet Kazakhstan.

Photo of Private Poroshenko, left, and President Poroshenko, right, during his visit to the Pentagon on Tuesday. Text reads: "Soviet Army Private #Porshenko dreamed of getting into the #Pentagon."

© REUTERS / Jonathan Ernst
Poroshenko Calls US a 'Co-Sponsor' of Ukraine's 'Success' Story
Last October, Poroshenko told a group of students at Kiev National University that he was "involved in fighting" during his service, although he did not reveal where he (allegedly) fought. He also said that service in the Soviet Army gave him "a completely different perception of the world, and that it was something that "shapes a man."

With this in mind, it's unclear whether the Ukrainian leader was simply trying extremely hard to curry favor with Secretary Mattis, or whether he really did once harbor plans to betray his country (which at the time was the Soviet Union) for the US. Or perhaps Poroshenko meant that he wanted to "be in the Pentagon" as part of a contingent of Soviet troops in some sort of Red Dawn-style scenario. Without further explanation, it's hard to say with any certainty.

During his two day visit to Washington June 20-21, Poroshenko met with Mattis, Vice President Mike Pence, Secretary of State Rex Tillerson, and the heads of the IMF and the World Bank. He also paid a brief drop-in visit with President Donald Trump in what AP described as 'a brief photo opportunity'.

Pence Tells Poroshenko US Continues to Back Normandy Format Talks

Poroshenko Calls US a 'Co-Sponsor' of Ukraine's 'Success' Story

Trump Says Much Progress Made in Discussions With Poroshenko