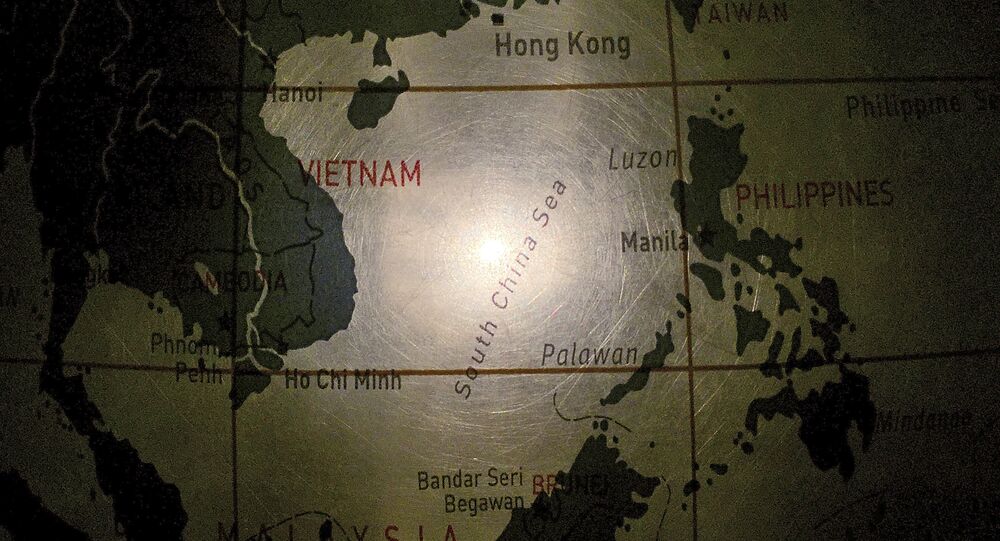 Last week, Foreign Affairs magazine contributor Ely Ratner penned an analysis containing a series of proposals on how Washington might thwart Beijing's efforts to irreversibly strengthen its presence in the South China Sea. However, according to China expert Vasily Kashin, the reality is that no matter what the US does, it's probably too late.

Ratner's piece, dubbed 'Course Correction: How to Stop China's Maritime Advance, contains a series of proposals on what Steps the US needs to take to stop China's steady expansion in the South China Sea.

Commenting on the former Obama administration China advisor's piece in a special analysis for Sputnik, military and geopolitical observer Vasily Kashin noted that unfortunately, Ratner's piece is filled with unrealistic estimates about the progress China has made, the depth of Beijing's influence in Southeast Asia, China's determination and, most importantly, the dysfunctionality of current US policy.

© AP Photo / Eugene Hoshiko
US Aircraft Carrier Ronald Reagan, Strike Group 5 Arrive in Singapore - Navy
For starters, Kashin explained that when assessing any US plans or opportunities to act vis-à-vis China, "one must take into account that the Chinese seem to know much more about US plans and intentions than the US knows about Chinese plans or intentions."

What's more, the expert noted that's necessary to remember that China has immense influence and deep ties to American business, "up to and including the opportunity to influence the activity of the American cultural industry, and to prevent the production of anti-Chinese films by Hollywood."

As far as Chinese ambitions are concerned, Kashin noted that contrary to Ratner's suggestion that Beijing seeks to claim "almost the entire sea" area in the South China Sea, the real goal seems to be "effective military control over the water area, achieved by latching onto a few key points and creating the necessary infrastructure there."

"From this perspective, the main goal has basically been achieved. The creation of facilities on Scarborough Shoal will make China's success absolute, but in general the current situation is already very favorable," the expert added.

Kashin stressed that the measures Ratner proposes, including building up relations with the countries of Southeast Asia, placing more US troops in the region, and creating alternatives to Chinese economic influence in the region, while theoretically feasible, are not possible under the current domestic political situation within the United States.

"The decision-making process in the US is largely paralyzed by the struggle between the president on the one hand, and Congress and a significant portion of the federal bureaucracy on the other," the analyst noted. "In these conditions, a serious redistribution of resources is simply impossible. The Trump administration is forced to outline in general terms the Asian policy of the Obama administration, but in weakened form, thanks to Washington's withdrawal from the Trans-Pacific Partnership."

Finally, Kashin noted that putting aside the capabilities and ambitions of Beijing and Washington, the interests and ambitions of countries in the South China Sea region themselves have led to an irreversible swing in Beijing's direction, geopolitically speaking.

"None of the countries of Southeast Asia are prepared for a sharp deterioration in relations with China, even those which are dependent on a military alliance with the US," the expert wrote.

© REUTERS / EZRA ACAYAN
No More US Hand-Me-Downs: Philippines’ Duterte Wants Brand New Weapons at Any Cost
"Moreover, these countries do not use their relations with China to strengthen their position vis-à-vis Washington. On the contrary, they use the US to strengthen their positions in dialogue with China, because relations with the PRC are usually far more significant than those with the US. Chinese politics is not a cause for any enthusiasm, but at least looks more understandable, consistent and predictable than those of the US."

Accordingly, Kashin stressed that for the US to really challenge Beijing in the South China Sea, "they will need more than just a series of successful tactical moves. Success will be possible only if a number of principles for decision-making, and the entire US approach to the countries in the region, are changed. But at the current moment, the US seems hardly prepared to do so."

Creating Enemies: China to Continue Military Buildup, US Needs to Get Used to It

'Swordplay' Between China, N Korea is Not What US and Allies Perceive It to Be