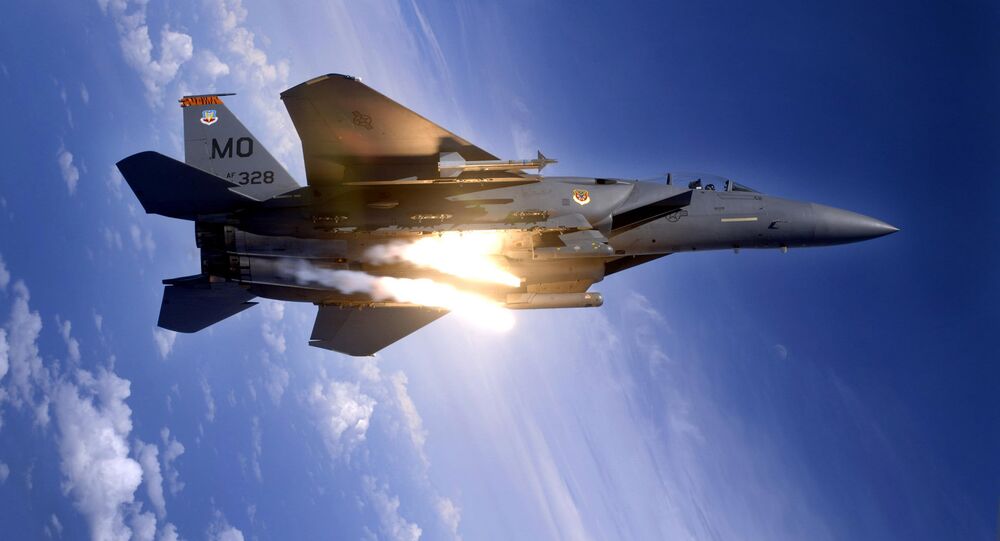 Qatar has signed a deal to buy $12 billion-worth of McDonnell Douglas F-15QA Eagle air superiority fighters from the United States. Speaking to Radio Sputnik, Birol Baskan, an assistant professor at the Georgetown University School of Foreign Service in Qatar, said that the deal clears Doha's reputation as a terror state.

On Wednesday, Bloomberg reported that the Pentagon had finalized the sale of 36 F-15QA Eagle to Qatar for $12 billion.

© Flickr / awee_19
Qatar Asks US to Partly Implement $21.1Bln Deal - State Dept.
Observers rushed to point out that the deal was completed in spite of the fact that US President Donald Trump had earlier criticized Qatar, even going so far as to accuse the state of supporting terrorism. The Pentagon issued a press statement saying the sale would increase US-Qatari security cooperation. The same day, two US Navy vessels arrived in Doha for a joint exercise with the Qatari Navy.

Asked to comment on the F-15 deal, international politics expert and Georgetown University professor Birol Baskan said that it was certainly significant.

"As many Qatari officials are declaring, if Qatar is a terrorist country, why is the US providing these very highly advanced jets? That is the [real] short-term significance of the move. Basically, some institutions in Washington do not see Qatar as a terrorist state, as President Trump and Gulf States like to portray," Baskan noted.

The professor added that in effect, "this move is basically clearing or reinstating Qatar's reputation – not as a terrorist state, but as a normal state."

US Navy
US Ships Arrive in Qatar for Joint Exercise Amid Blockade
Baskan noted that in the long run and within the context of the Persian Gulf region, the sale was significant because Qatar has been regionally since at least 2013, after the military coup in Egypt, when the Doha-supported Muslim Brotherhood was overthrown in a military coup. "Since that time, Qatar has been facing a security threat from Saudi Arabia and the United Arab Emirates," and was subsequently "hoping to beef up its defense capabilities."

Finally, the professor said the deal was significant militarily speaking, since it effectively amounts to a doubling of the number of jets Qatar has. "From Qatar's perspective, it's a huge increase," Baskan stressed.

Asked why the Pentagon would agree to what appears to be such a major policy turnaround, just a little over a week after President Trump accused Doha of funding terrorism, Baskan noted that the president's comments notwithstanding, Qatar was and remains a major strategic ally for the US, and hosts the largest US base in the Middle East, as well as Centcom, its regional military headquarters.

"So the fact  that President Trump has implicitly or explicitly accused Qatar of being a terrorist state, is really not within the [practice] of US policy," the professor noted. Baskan recalled that the US ambassador to Doha, as well as Secretary of State Rex Tillerson came out disagreeing with the president. Furthermore, "today, the Pentagon approved the sale; all of this says that [US foreign policy] is really confused…The deep state is trying to control President Trump, and so far failing to bring him to established American foreign policy."

© CC0
Under Siege: How Blockade Changed Life in Qatar
Ultimately, Baskan noted that major powers, including the United States but also Russia, should intervene between Riyadh and Doha and try to "cool down this crisis."

"If Qatar is somehow 'disciplined' by Saudi Arabia, I don't think this is going to be a gain for anyone in the region," he stressed. Pointing to Washington's immense leverage in the Gulf, Baskan said that the US could urge its allies to reach a compromise.

"But whether the US is going to do that is really dependent on whether President Trump can be controlled by the establishment – by US institutions – whether it is the Department of State, the Pentagon…think tanks and others…The fact that the US is taking sides in this conflict is not good for the Gulf. This might push Qatar into the fold of Iran and Turkey. I'm not against Turkey or Iran, but I think this polarization of the Gulf is just adding another layer to the already problematic region," Baskan concluded.