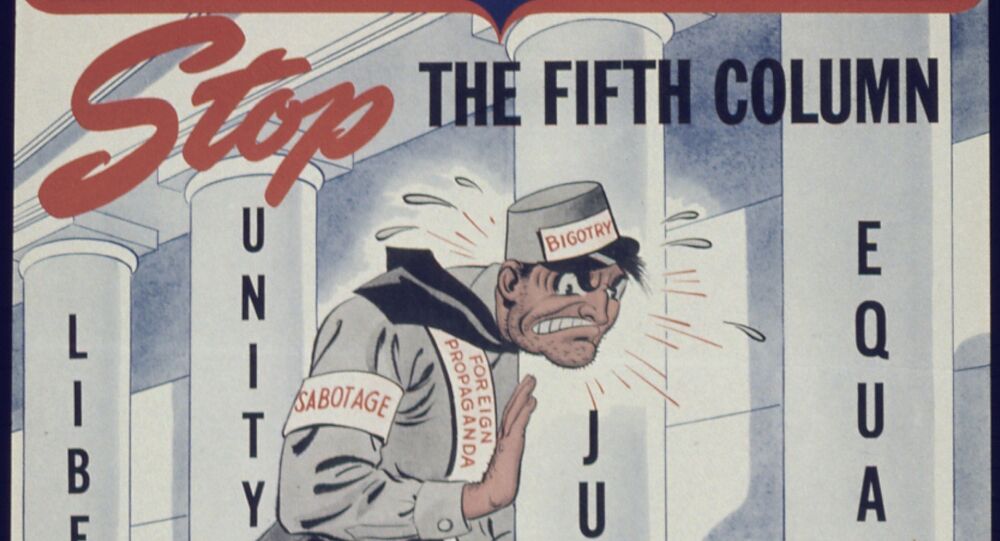 Politico has published an exposé about how 'Russian propaganda' is destroying the US military from the inside out and turning servicemembers and veterans into a dangerous 'fifth column'. Speaking to Radio Sputnik, political observer Valery Korovin said that the truth is that US military leaders are just afraid of alternative sources of information.

The Politico piece, coming out the same day that Secretary of Defense James Mattis issued his own letter to Congress about the challenges Russia and China pose to US military dominance, consists of a series of paranoid anecdotes about how the Kremlin appears to be infiltrating all aspects of US political life, including the military.

© AFP 2020 / NIKOLAY DOYCHINOV
US Acknowledges That Its Military Superiority is 'No Longer a Given Fact'
Politico goes on to complain about phishing attacks against DoD employees, allegedly coming from Russia, and about intelligence gathering missions against service members by "Russian state actors" "posing as attractive young women on Facebook".

Pointing to the fact-free investigation into alleged Russian interference in the 2016 US presidential election, Politico stresses that the Kremlin is "using the same playbook against other pillars of American society, foremost among them the military."

Speaking to the news site, Philip Breedlove, the Obama-era NATO Supreme Allied Commander who called Russia an 'existential threat to the West,' warned about a 'concerted Kremlin influence campaign' by Russian online trolls to influence and manipulate card-carrying Republicans, servicemen and veterans. "People popping up on veterans' sites and singing the praises of Putin, you can guarantee those are trolls and part of the army that's sitting over there attacking us every day," Breedlove said.

Ultimately, Politico cautioned that Russia's efforts have "the potential to blunt the military's ability and weaken its resolve to counter future Russian military aggression."

© Sputnik
(Not the) A-Team
Commenting on the Politico piece, Russian political observer Valery Korovin told Radio Sputnik that it makes sense for Pentagon strategists and politics watchers to fear the kinds of alternative sources of information presented by English-language Russian information resources. The US military, he said, operates under a system of meanings which alternative resources may weaken, or demolish altogether.

"A society can be controlled with the help of meanings, while a society without meanings can be managed rather effectively and efficiently. Today, the US Army acts on the basis of concepts which are based in lies or misinformation. Therefore, [military leaders] are afraid that the so-called 'Russian propaganda' might influence decision-making, or serve as a demotivator for the US Army," Korovin explained.

According to the observer, US strategists, fully aware of the weak spots in their ideological constructs. The Pentagon, he said, sees and understands the dangers that lie in their servicemen finding alternative (but not false) sources of information and meaning –outside those created by US propaganda. Doing so, they "may completely reorient themselves toward a different system of values, finding them in Russian media, in the Russian 'informational machine', and [thus] changing their priorities and their views."

© Flickr / Lockheed Martin
Oops, There Goes Another Billion! 4 Biggest Flops in US Military History
This, naturally, is unacceptable to Pentagon top brass, particularly amid the efforts to drum up animosity toward Russia; hence the attempts to discredit Russian news and analysis resources, and paranoid claims in resources such as Politico that the Kremlin is engaged in some kind of grand, large-scale effort to create a 'fifth column' in the US armed forces.

For his part, military observer and RIA Novosti contributor Alexander Khrolenko wrote that the biggest problem for the morale of the US military wasn't Russian hackers or 'Facebook-based agents of influence,' but decades of the Pentagon using its troops to invade or topple governments in small, poor countries.

It was natural, the journalist noted, that attacks against undesirable governments in third world governments, together with policing operations to preserve US hegemony would cause the military to lose both its professional skills and its morale.

Furthermore, commenting on Secretary of Defense James Mattis' remarks about Russia and China posing a challenge to US geopolitical and military dominance, Khrolenko wrote that here too, "the ideological failure was obvious."

© AFP 2020 / NICOLAS ASFOURI
Decline of US, Rise of China 'Happening Much More Quickly Than Predicted'
"The problem is not Russia, which, according to Mattis, must be talked to from a position of strength. When it was time to explain to Americans why they should risk their lives in the fight against the Russians, Mattis offered something abstract, saying: 'A return of great power competition, marked by a resurgent and more aggressive Russian Federation and a rising, more confident and assertive China, places the international order under assault.'" Mattis also accused Moscow and Beijing of challenging international norms, like freedom of navigation and national sovereignty.

According to Khrolenko, this isn't enough. "I don't believe that there are many people in the US who are willing to give their lives for 'the freedom of navigation'," the journalist wrote. "If the head of the Pentagon truly believes that Putin has decided to make Russia a 'strategic rival' to the United States, and that this creates military threats, he needs to present more weighty arguments. And if Mattis is just acting shocked by the low combat readiness of his army for the sake of additional billions of dollars of funding, it means he has already been defeated. Because military valor is not something that can be bought for money."

Mattis 'Shocked' by US Military's Lack of Readiness Following Sequestration

Oops, There Goes Another Billion! 4 Biggest Flops in US Military History