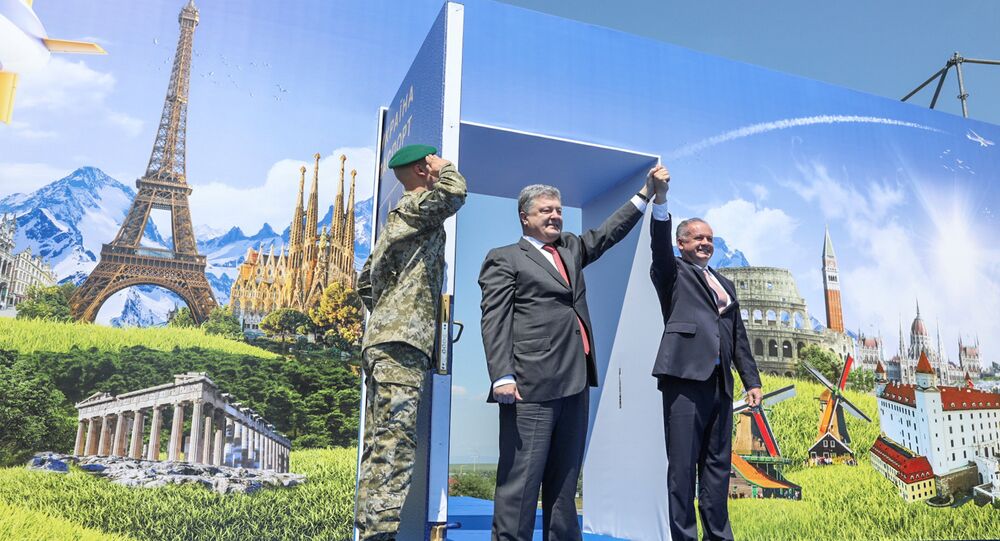 Ukraine's Visa Free Travel to the EU: At What Price Does It Come?

While Ukrainians are rejoicing at their new visa-free travel agreement with the EU, many questions arises as to what the implications of the recent development will be and at what price it will come, RIA Novosti contributor Nyura N. Berg writes.

© Sputnik / Andrey Stenin
'Depopulation': Why People Are Fleeing Ukraine at Steady Pace
Ukraine is currently elated at having been granted visa-free travel throughout the European Union. However, observers are asking if there are unseen costs to the deal.

Short-term visa-free travel to Europe's Schengen Area was granted to Ukrainians Sunday. In accordance with the agreement, they are now able to travel to the countries of the Schengen Area for 90 days out of every 180 for tourist, business or family purposes, although they have no right to work or study in the EU member states.

However, Brussels reserves the right to suspend the visa-free arrangement if security or illegal migration problems emerge.

RIA Novosti contributor Nyura N. Berg has called attention to the fact that many in Ukraine see visa-free travel as a golden opportunity to stay in Europe for good.

"Most 'sober and prudent' Ukrainians… understand that if one wants to stay and put down roots in the EU, one must act now. [The thing is that] the European Commission can launch a procedure for the abolition of visa-free travel if the number of returnees doesn't coincide with the number of those who left for the EU. Therefore it's time to strike while the iron is hot," Berg wrote.

"Legal, semi-legal and even underground recruiting firms are already offering Ukrainians employment options [in the EU]," she added.

© REUTERS / Mikhail Palinchak
Calm Down Petro! Moldova's Sorry Experience With Visa-Free EU Travel a Warning to Ukraine
In her previous op-ed, Berg rang alarm bells about ongoing depopulation in Ukraine, adding that the visa-free arrangement may facilitate illegal migration from the country to the EU.

However, Kiev is turning a blind eye to this prospect: all the Poroshenko government cares about is how to win the second term and stay in power, the journalist noted.

"We have been waiting for this moment for a long time and this is a historic moment when we lift this paper curtain separating Ukraine from Europe. It means that Ukraine has carried out huge reforms. We have changed our country by our joint efforts and our partners in Europe have kept their word and now the door of the European Union, the door of our friends is open to our nation of 45 million, for the Ukrainian people. I congratulate all of you," Ukrainian President Petro Poroshenko said, opening a symbolic door to the European Union at the border with Slovakia on Sunday.

The next day, while delivering his speech at an official event in Kiev, Poroshenko stated that "[Ukraine and Russia] finally became independent from each other, including politically, economically, energetically and mentally."

"The Father of the Nation failed to clarify, however, what two and a half million Ukrainians working in Russia will do now," Berg noted ironically; "Should they bid farewell to Russia too and return home?"

© AP Photo / Sergei Chuzavkov
Mogherini on Ukraine's EU Visa-Free Regime: 'We Have Kept Our Promise'
Commenting on Kiev's enthusiasm about gaining visa-free travel to the EU, Bogdan Bezpalko, Ukrainian politics expert and deputy director of the Center for Ukrainian and Belarusian Studies at Moscow State University, noted that the visa waiver is by no means a panacea against the Ukrainian economic crisis.

To illustrate his point, the expert referred to Moldova, Ukraine's southwestern neighbor that has enjoyed a visa-free travel with the EU for about three years. The socio-economic situation in the country still hasn't improved there.

"Moldova has had this kind of visa-free system for a long time, but it never did become a driver for the Moldovan economy. Moldova is more dependent on remittances from citizens working abroad than Tajikistan," Bezpalko told RIA Novosti, suggesting that Poroshenko is "playing for his audience and trying to present the visa-free agreement as his great achievement."

For its part, Brussels is signaling that Ukraine has deserved this opportunity.

"How exactly did Kiev curry favor with the EU?" Berg asked, "By the genocide of the population of the Donbass, the dictatorship of radicals, the violation of laws, the increase in mortality, the impoverishment of the population, the collapse of the economy or by the export of black soil and wood?"

"They [Eurocrats] do not specify; maybe they are embarrassed," the journalist remarked ironically.

© Sputnik / STR
'Principle of Mutuality' to Guide Russia If Ukraine Introduces Visa Travel - Kremlin
As if that were not enough, the Ukrainian leadership has recently voiced its intention to introduce visa requirements for Russian citizens.

Moscow's response was not long in coming.

"We said quite consistently that such actions, as a rule, receive a reaction based on the principle of mutuality. Therefore, there is nothing new here, but of course we can say that there will be a response," Kremlin spokesman Dmitry Peskov said June 7. In April 2014, as authorities launched the so-called "anti-terrorist operation" in the Donbass region, Kiev effectively banned entry for all Russian men between the ages of 16 and 60.

To add to the embarrassment, Ukrainian President Petro Poroshenko's representative in the Verkhovna Rada Iryna Lutsenko revealed on Friday that the cost of Kiev introducing visa requirements for Russian citizens would amount to 1.5-2 billion hryvnias or, approximately, $56.7 — 76.5 million.

Only time will tell what the implications of the current developments in Ukraine will be, Berg noted, adding that right now Ukrainians are rejoicing.