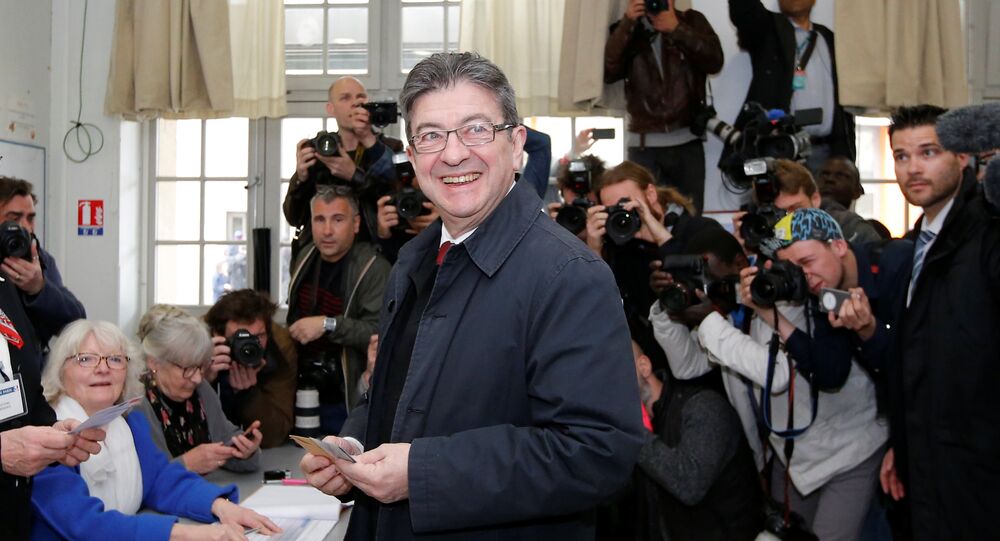 The members of the left-wing Unsubmissive France (La France Insoumise) political movement will participate in the French legislative election, the first round of which is scheduled for Sunday.

MOSCOW (Sputnik) — Unsubmissive France was created in 2016 by a representative of France’s left forces Jean-Luc Melenchon.

Before engaging with the socialist ideology, Melenchon was fond of Trotskyism and studied the works of Karl Marx.

In 1977, Melenchon joined the Socialist Party which he left in 2008, establishing his own Left Party. The party became a political ally of the French Communist Party and formed the Left Front political movement along with it.

In 2009, Melenchon was elected to the European Parliament from the Left Front and was reelected in 2014.

© AFP 2020 / BERTRAND GUAY, JOEL SAGET, FRANCOIS GUILLOT, PIERRE VERDY, ANNE-CHRISTINE POUJOULAT, LOIC VENANCE, ALBERTO SIMON, Joël SAGET, Fred DUFOUR
All You Need to Know About Macron’s La Republique en Marche Party
In the first round of the 2012 presidential elections, Melenchon received 11.1 percent of votes, which precluded him from continuing to the run-off during which Melenchon supported candidate of the Socialist Party Francois Hollande.

In February 2016, Melenchon was the first to announce he would run for the presidency again. The politician created new civil movement Unsubmissive France, which was operating on the basis of an online platform. Melenchon conducted his election campaign mainly through digital and interactive technologies – the politician has over a million of followers in such social networks as YouTube and Instagram.

Melenchon’s election program has been discussed on his website for several months. Apart from this, Melenchon appeared as a hologram at the rallies in several French cities simultaneously.

In his election program, Melenchon called on the French for a nonviolent "citizens' revolution. "The force of the people" was one of his main slogans calling for a radical renewal of the current system of strong presidential power and the creation of the new, sixth parliamentary republic.

Among Melenchon’s election promises were the introduction of the free health care, a 100-percent tax on income over 360,000 euros [$403,050] per year, raising the minimum wage to 1,700 euros a month and the reintroduction of the retirement age of 60 years.

© Sputnik / Alexey Vitvitsky
French Parliamentary Elections Procedure
Apart from this, Melenchon said, that in case of his victory at the presidential election, he would withdraw France from the North Atlantic Treaty Organization (NATO), remove Paris’s signature under NATO’s decision to deploy the elements of the missile defense system in Eastern Europe and convene a European security conference to discuss the issues of strengthening peace through diplomatic negotiations on the continent.

Melenchon advocated the reinforcement of the United Nations’ role in the world politics which would result in weakening of the United States on the international arena. The politician also spoke for the development of fair relations with all countries, as well as rapprochement with Russia.

Until the very end of the election campaign, Melenchon has been mentioning France's withdrawal from the European Union in his election promises. However, the criticism over his excessive rapprochement with the nationalists made Melenchon claim he intended to preserve the Fifth Republic in the bloc.

Melenchon scored 19.58 percent of ballots during the first round of the French presidential election on April 23 which prevented him from passing to the run-off election.

According to the politician, Unsubmissive France will be able to form a new parliamentary majority at the upcoming legislative elections.