The first round of the legislative election in France will be held on June 11, with the second round of voting scheduled for June 18. 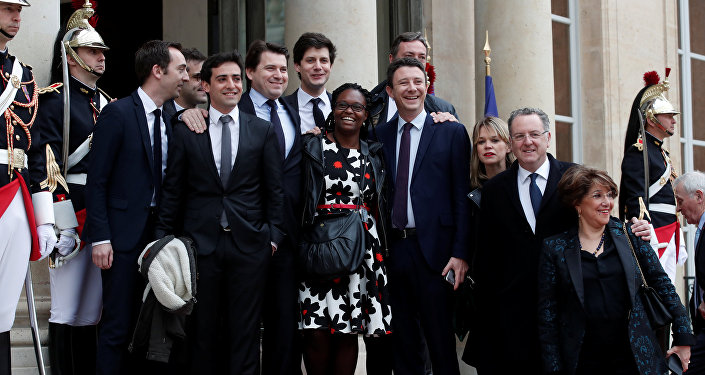 © REUTERS / Benoit Tessier
French Republique en Marche Party May Win More Than 289 Seats Needed for Majority
According to a recent poll, the alliance of La Republique en Marche party (REM) founded by French Present Emmanuel Macron and The Democratic Movement (MoDem) may win between 385 and 415 seats, more than 289 required for a majority in the 577 seat National Assembly.

By contrast, expect results for the National Front movement led by Marine Le Pen do not look promising. According to an Ipsos/Sopra Steria survey for France Televisions and Radio France, the right-wing party, currently represented by two lawmakers, may get from five to 15 seats, with 15 deputies being the minimal number required to form a parliamentary group.

The National Front has not yet recovered from Le Pen’s defeat in the presidential election. Despite a significant number of votes (10.6 million), the result of the run-off was a disaster.

Le Pen came in on top only in two of all the French departments, with 52 percent in Pas-de-Calais and 53 percent in Aisne. Supporters of the National Front realize that such a performance cannot translate into a descent result in the upcoming legislative vote.

© REUTERS / Benoit Tessier
Marine Le Pen Regains Presidency of National Front Party
The 577 deputies of the French National Assembly are elected by direct universal suffrage with a two-round system in 577 constituencies, on a plurality voting basis. To get elected in the first round, a candidate must receive at least 50 percent of the votes, with a turnout of at least 25 percent.

Amid a plurality voting system, the support of seven-eight million people can guarantee the maximum of 18 parliamentary seats for Le Pen’s party.

After the defeat in the presidential election, Le Pen has significantly rolled back National Front’s legislative electoral campaign. She attended only one rally before the vote.

Speaking at an event in Calais, Le Pen told her supporters: "If the National Front fails to receive 15 seats in the parliament to form a faction this will not be a danger for us. This will be a danger for democracy in our country."

Several months ago, Macron’s rise to power was not accompanied by nationwide public support. His result in the first round of the presidential election was lower than that of his predecessors on the post. However, after Macron won the Élysée Palace, he managed to consolidate and increase public support.

Sociologists explain that French people are tired of old politics and want to see new faces in the government and the parliament. Macron has taken full advantage of this trend, with an almost fully refreshed list of party’s candidates.

Over Half of French Have Confidence in President Macron