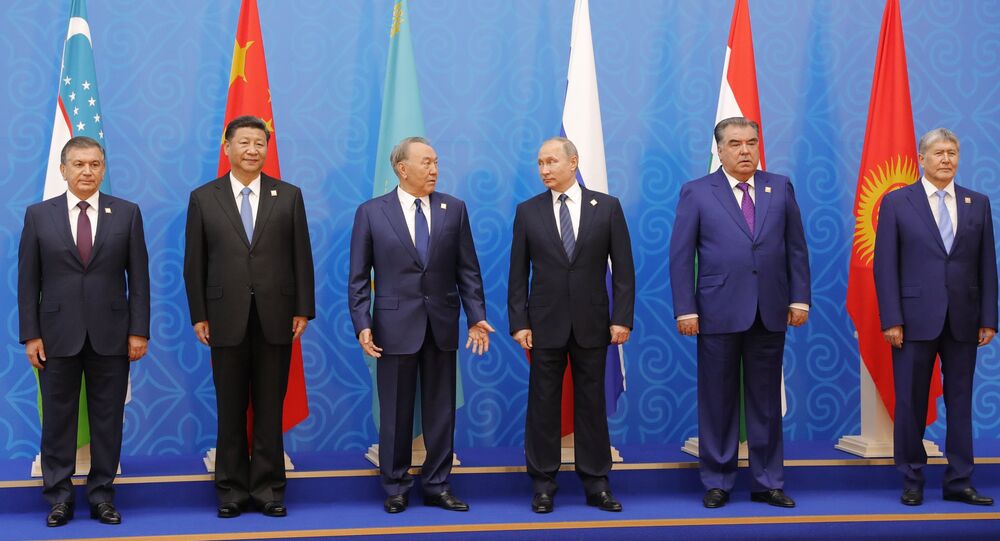 The expansion of the Shanghai Cooperation Organization (SCO) membership will make the organization more powerful and influential in the political, economic and humanitarian fields, Russian President Vladimir Putin said Friday.

ASTANA (Sputnik) — Earlier in the day, leaders of the SCO member states, namely Russia, China, Kazakhstan, Kyrgyzstan, Tajikistan and Uzbekistan, signed the decree on admitting India and Pakistan to the bloc.

"Today, new full members join the Shanghai Cooperation Organization… The expansion of the SCO will undoubtedly contribute to ensuring that it will become more powerful and influential in the political, economic and humanitarian spheres," Putin said at the SCO leaders’ meeting in Astana.

© Sputnik / Vladimir Rodionov
What You Need to Know About Shanghai Cooperation Organization
Putin also said that the decision to start the process of India's and Pakistan’s admission to the SCO had been made during 2015 summit in Ufa under Russia’s presidency in the organization, and stressed that these countries had fulfilled all requirements to enter the SCO in less than two years.

"Now, our task is to help the new partners to integrate into the extensive work ongoing within the SCO," Putin added.

Putin also said that the SCO members should work on combing economic cooperation efforts and national strategies to bring together the capacities of the existing integration projects in Eurasia, including the Eurasian Economic Community (EURASEC) and the One Belt, One Road initiative.

© AP Photo / Ng Han Guan
China's New Silk Road Project Falls Short of Russia's Expectations
"As for the economic aspects, I am sure that we must focus on combining efforts, coordination of national strategies and multilateral projects throughout the Shanghai Cooperation Organization. The aim is to combine the potentials of the Eurasian Economic Community, SCO, Association of Southeast Asian Nations [ASEAN] and the Chinese initiative One Belt, One Road."

The topic will be discussed in detail at the forthcoming Eastern Economic Forum in Russia's Vladivostok set to take place on September 6-7, the SCO high-level conference on trade and economic cooperation in Moscow and the third forum on small business of the SCO and BRICS regions in Ufa on September 28-29, the Russian president stressed. "I take the opportunity to invite all our partners to take part in these events," Putin said.

The SCO is a political, military and economic alliance. Its two-day summit kicked off on Thursday in the Kazakh capital of Astana. The agenda of the summit includes issues related to cooperation in fight against international terrorism, security and the situation in the Middle East and Afghanistan.