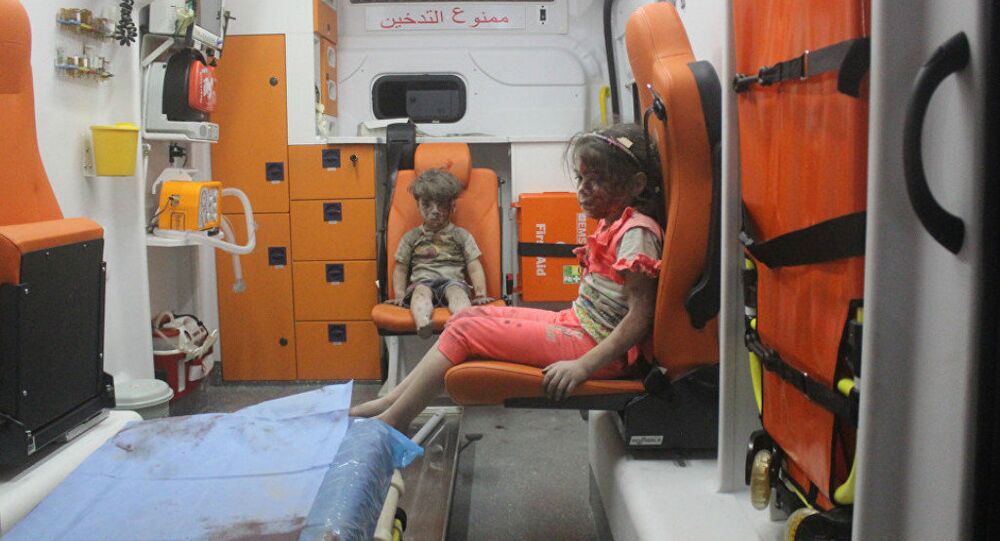 The family of Omran Daqneesh, a Syrian boy from Aleppo who came to be known as the "symbol of Aleppo suffering" in Western media, is receiving threats from radical Syrian opposition for not supporting false accusations against official Damascus, Russian Foreign Ministry’s spokeswoman Maria Zakharova said on Thursday.

MOSCOW (Sputnik) — On Tuesday and Wednesday, RT released a two-part interview with Omran Daqneesh's father, Mohammad Kheir Daqneesh. The interview revealed that the White Helmets volunteers had photographed Omran instead of offering immediate help. The family was then forced to go into hiding because of the threats it was receiving for refusing to allow the media and opposition to use Omran in anti-Damascus propaganda.

"Despite numerous offers and various financial enticements, they were actually offered huge amounts of money from the opposition, they [the family] refused to make false accusations against the Syrian authorities. Now the family is receiving constant threats of punishment, the radical opposition calls them unfaithful and deserving death," Zakharova said at the weekly briefing.

She added that in August, the Russian Foreign Ministry underlined the need to "wait before exploiting a child’s image for a political purpose," as the Omran's story is as not as simple as it may seem.

"Again they did not listen to us… A year later, the RT channel found the family of the boy and made an interview with his father. As it turns out, the boy was really injured, but the entire situation against him was completely perverted by these so-called journalists and human rights activists … The boy’s father, a former military serviceman, said he was never in opposition to the government, as the western media tried to show … He also said that he had not heard any noise of aircraft during the attack, and the house collapsed because of an explosion," Zakharova said, adding that after the photo of the child spread across the world, the family "had to do something to protect their child, to somehow start to observe his rights."

© REUTERS / Mahmoud Rslan
RT Editor-in-Chief Ready to Take CNN Host to Syria to Meet 'Symbol of Aleppo Suffering'
She stressed that the mainstream media tries to "create a virtual and not a real agenda, completely forgetting about the principles of objectivity and impartiality."

Photos released in August showed the boy injured, covered in ashes after his house collapsed during an attack in the militant-controlled Karm al-Qaterji neighborhood of Aleppo. Syrian armed has opposition accused Russia of conducting an airstrike on the neighborhood, while Moscow has denied Western media reports of Russia’s alleged role in the strike.

In 2016, Russian Defense Ministry’s spokesman Maj. Gen. Igor Konashenkov stated that the images shown by the Western media during Omran’s rescue show that the damage could not have come from aircraft munition, but more likely from a mine or a gas cylinder that are heavily used by terrorists in Syria. Konashenkov accused the media of committing a "moral crime" in the "cynical hype" of the volunteers' footage for their "formulaic propaganda material."