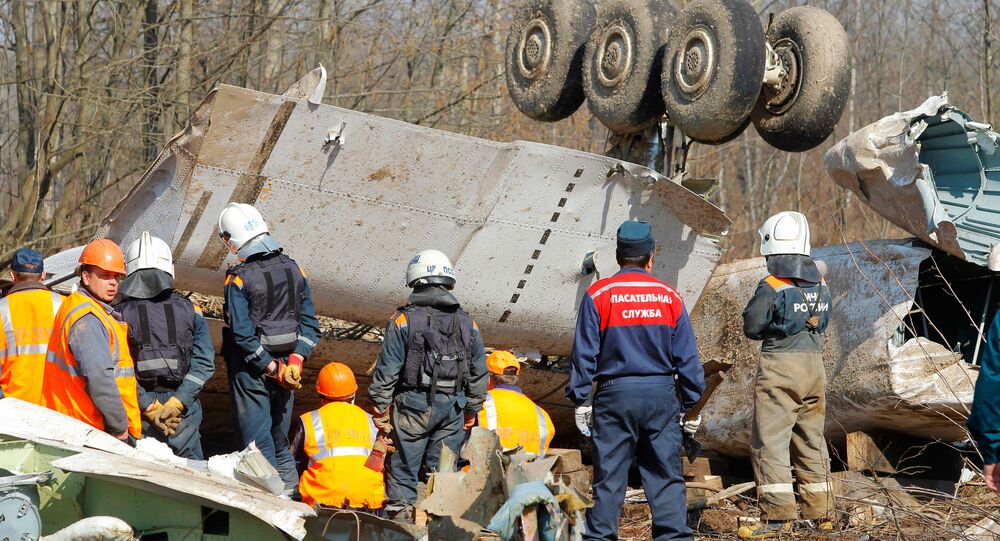 Seven years have passed since the 2010 plane crash in Smolensk, Russia, which killed Polish President Lech Kaczynski and dozens of high-ranking officials. Amid new claims of a 'Russian conspiracy' by Polish officials, Russia's Izvestia newspaper gained access to confidential documents to understand what really happened on that tragic April morning.

On April 10, 2010, the Polish presidential Tu-154M, on its way to Russia to mark the 70th anniversary of the Katyn massacre, the mass execution of Polish officers by the Soviet NKVD during WWII, crashed outside Smolensk, western Russia, killing all 96 passengers and crew onboard. Investigators concluded that pilot error and poor weather conditions were to blame for the disaster.

In the years since, conspiracy theories have been floated in Poland among political forces hostile to Russia that the accident was really a secret plot by Moscow to assassinate Polish leaders. For years, these claims were brushed off by Warsaw, whose own inquiries found no evidence to back up such claims.

© AP Photo / Czarek Sokolowski
New Polish Defense Doctrine Wins 'Who's Most Paranoid About Russia' Contest
However, in 2015, following the election victories of the Law & Justice Party, led by President Kaczynski's twin brother Jaroslaw, the conspiracy theories would become official government policy. In 2016, Warsaw launched a new 'investigation', aimed at killing two birds with one stone. On the one hand were the Russians, the traditional scapegoat for all of Poland's problems, and on the other hand European Council President Donald Tusk, the Civic Platform politician who was prime minister in 2010, and whom Law & Justice has had a burning desire to keep in check.

The absurdity of the new crash investigation is obvious from the kinds of theories it has come up with. Among them is the claim, considered as one of the most likely causes of the crash, that thermobaric explosives went off inside the plane. Leading Polish and Russian experts who led the 2010 investigation have baulked at the suggestion that an explosion brought down the aircraft. Former head of the Polish commission Maciej Lasek stressed that after having studied dozens of samples, Polish specialists had "unambiguously ruled out" that an explosion took place.

An exasperated Russian Foreign Ministry has said that Warsaw's latest claims were absurd, and could not be taken seriously. Other officials, including from the Russian Interstate Aviation Committee, emphasized that not only were the new accusations baseless, but that Warsaw was deliberately ignoring or simply suppressing evidence which doesn't match their theories.

© RIA Novosti . Ilya Pitalev
People lay flowers to mark their condolences to Poland following the deadly crash of the Polish presidential Tu-154M which killed everyone onboard, April 2010.

Warsaw's new 'investigation' has involved the mass exhumation of the bodies of the crash victims, including President Kaczynski himself. Last week, Polish prosecutors revealed that they had discovered the remains of the genetic material of two other people in Kaczynski's coffin alongside the president. Authorities immediately pointed the finger at Russian forensic investigators and medics, accusing them of incompetence or even of having deliberately desecrated the remains.

Speaking to Russia's Izvestia newspaper, Russian Ambassador to Poland Sergei Andreev said that the claims that Russian investigators would deliberately desecrate bodies were "absolutely unacceptable." Russia, he said, handed over the remains to the Polish side with the understanding that Poland would conduct further examinations of their own before burial. The ambassador emphasized that the Russian experts were forced to work "in conditions of an acute lack of time," and that they did "everything that was possible" under the circumstances.

© RIA Novosti . Iliya Pitalev
Former Commission Head on Polish Tu-154 Crash Rules Out Alleged Explosion
Sources close to the 2010 investigation told Izvestia that Warsaw had only received this opportunity to present these new deeply insulting claims against Russia thanks to the fact that authorities had pressured Russian investigators to move quickly, resulting in a failure to identify two sets of remains.

"It's enough to glance at this document to immediately understand the absurdity of the claims [presently being made] by the Polish side," Izvestia noted. "The document states that 'during the investigation to identify the remains, no grievances or observations were made toward the Russian side regarding the measures which were undertaken or their results.'"

© REUTERS / Agata Grzybowska/Agencja Gazeta
Jaroslaw Kaczynski, the twin brother of the late President Lech Kaczynski, attends a ceremony outside the Presidential Palace in Warsaw April 10, 2015 commemorating the crash of the Polish government plane in Smolensk, Russia which killed 96 people.

"In other words, the protocol clarifies a very important point in this whole story: When the tragedy outside Smolensk occurred, and the necessary measures were subsequently taken and the bodies handed over to Poland, the Polish side had no complaints or questions toward Russia." Only now, years later, when it has become politically convenient, have they appeared.

© Photo : Noël Lemire
Centuries of Scorn and Loathing: Why Warsaw's Hate for Russia Burns so Intensely
As for the new investigative commission's most sensational claim – that the presidential plane was destroyed by explosives hidden onboard, Russian diplomatic sources confirmed to Izvestia that Polish officials have even hinted that the explosives may have been placed onboard the presidential Tu-154M during regular repair work at Russia's Aviacor aviation plant in 2009.

Getting its hands on a previously never-before published document – Aviacor's statement of delivery and acceptance with the Polish side, Izvestia found "one small but important detail: the signature and stamp of the Polish recipients. According to the document, dated 21.12.2009, the Polish firm was satisfied with the quality of Aviacor's service, and took delivery of the plane without complaints, having testing it and carried out all the necessary inspections." In other words, documentary evidence shows conclusively that the new commission's claims belong in the realm of fantasy, rather than reality.

Even Warsaw's US allies decided to stay as far away as they could from the new crash investigation. To Warsaw's disappointment, Washington made clear that although the crash was a terrible tragedy, they want nothing to do with the new efforts to blame Moscow for the disaster. Speaking to the Polish Press Agency recently, US Ambassador to Poland Paul Jones said that the US had already passed on all the information they had for the original investigation, and that the US side didn't see anything more that could be done.

Ultimately, speaking to Izvestia about the continuing evolution of Warsaw's crash investigation, the Russian Foreign Ministry expressed its hopes that "the authors of these insinuations would return to sanity," and realize the futility of attempting to blame Russia for a catastrophe that was "perceived in our country as a real tragedy."