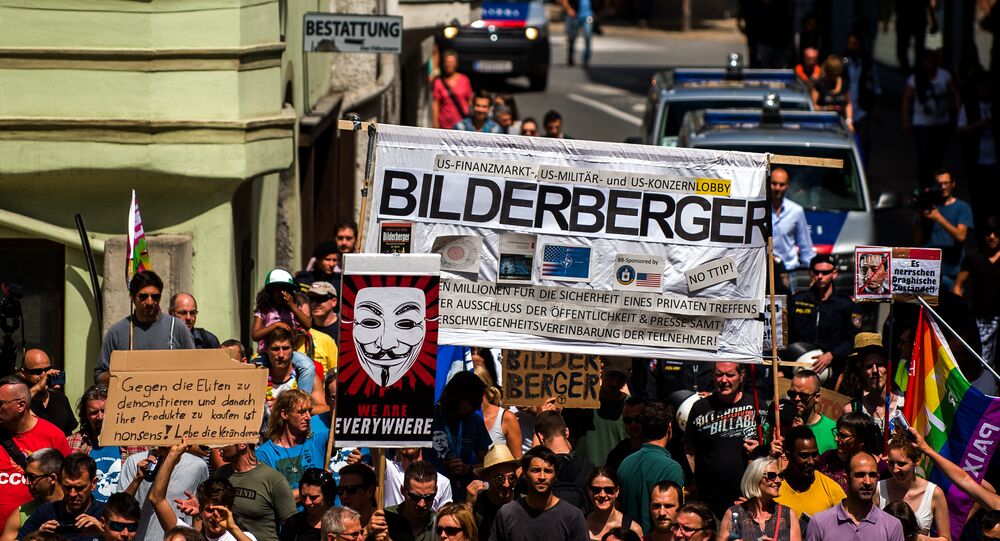 President Donald Trump's recent political moves, including the US withdrawal from the Paris climate accords, have triggered concerns among US and European elites. Apparently, therefore, the first three topics on the 65th Bilderberg Meeting's agenda are devoted to Trump and trans-Atlantic affairs.

US President Donald Trump has come into focus of the 65th Bilderberg Meeting, which is taking place on June 1-4 in Chantilly, Virginia, US.

"The Trump Administration: A progress report" tops the list of key issues for discussion, which also includes the future of trans-Atlantic relations, the direction of the EU, the war on information, Russia in the international order, the Middle East and China.

"As ever, a diverse group of political leaders and experts from industry, finance, academia and the media has been invited," the Bilderberg Group's official website says.

© AFP 2020 / PRAKASH SINGH
What Trump's Exit From Paris Climate Deal Has to Do With China, India
This year the event is attended, among others, by the head of the International Monetary Fund, Christine Lagarde, the NATO Secretary General Jens Stoltenberg, the former CIA leaders John Brennan and David Petraeus, the former US Secretary of State Henry Kissinger and the Chinese Ambassador to the USA Cui Tiankai.

The Bilderberg annual conference started back in 1954 and was designed "to foster dialogue between Europe and North America." In accordance with the meeting's rules, its participants are free to use the information they receive but it is strictly prohibited to disclose the identity of speakers or other partakers.

"Thanks to the private nature of the meeting, the participants are not bound by the conventions of their office or by pre-agreed positions. As such, they can take the time to listen, reflect and gather insights. There is no desired outcome, no minutes are taken and no report is written. Furthermore, no resolutions are proposed, no votes are taken, and no policy statements are issued," the website notes.

© AFP 2020 / STEPHANE DE SAKUTIN
Why Rockefeller's Death Doesn't Mean the End of 'New World Order' Doctrine
Interestingly enough, one of the topics offered for the discussion asks whether globalization can be slowed down. In fact, the Bilderberg conferences are seen by many as gatherings of political leaders and experts promoting ideas of globalization.

One of the so-called Bilderberg Club's longstanding members was David Rockefeller, the head of the prominent American banking clan, who passed away on March 20 at the age of 101.

David Rockefeller was considered a convinced "globalist" and an ideologist of the "new world order."

In his March interview with Sputnik, the geopolitical analyst and editor-in-chief of News Junkie Post, Gilbert Mercier, pointed out that Rockefeller was "the driving force" behind the creation of the Bilderberg Group, where he served for decades as the gatekeeper, being the only member of the advisory board.

"It is through those various channels and group of people that David Rockefeller quietly but efficiently influenced not only US domestic and foreign policies but also world affairs," Mercier told Sputnik.

The secretive atmosphere surrounding the meetings, as well as the list of its high-level participants prompted speculation that the Bilderberg Group is nothing but part of a "secret shadow government."

© Flickr / Bill Bradford
World's Secret Shadow Government: Conspiracy Theory or Frighteningly Real?
Madrid-based author and investigative journalist Daniel Estulin, a longtime watcher of the secret group, believes that the group harbors the plan to create "a One World Government (World Company) with a single, global marketplace, policed by one world army, and financially regulated by one 'World (Central) Bank' using one global currency."

Estulin also suggested that the Bilderberg Club is not acting alone, being supported by the US-based Council on Foreign Relations (CFR) and The Trilateral Commission, which were established in 1973 by David Rockefeller.

However, other observers insist that the group is unfairly demonized: it has neither political nor economic leverages to rule the world or keep world affairs under its control. Should it be otherwise, Henry Kissinger, a longstanding participant of the Bilderberg meetings, wouldn't have rung alarm bells over the disintegration of international order at the January Davos Economic Forum.

"One of the key problems of our period is that the international order with which we were familiar is disintegrating in some respects and that new elements from Asia and the developing world are entering it," Kissinger admitted, referring to the emergence of the new multipolar world.

© REUTERS / Aleksey Nikolskyi
'Triangular Diplomacy': What's Really Behind Kissinger's Turn Toward Russia
On the other hand, it appears that US President Trump poses yet another challenge to the so-called "globalists" due to his "protectionist" approach toward the US economy and global trade.

The European political elites have serious reasons to be discontent with Trump. During his first foreign trip to Europe, the US president demanded that NATO allies paid their fair share to the military bloc. At the same time, however, he refrained from pledging commitment to Article 5 of the Washington Treaty dedicated to collective defense.

Furthermore, Trump announced on Thursday that Washington would withdraw from the Paris climate agreement, aimed at combating "global warming."

​Perhaps, that is why the issues concerning trans-Atlantic relations and defense, as well as those dedicated to the progress made by the Trump administration top the Bilderberg meeting's agenda.