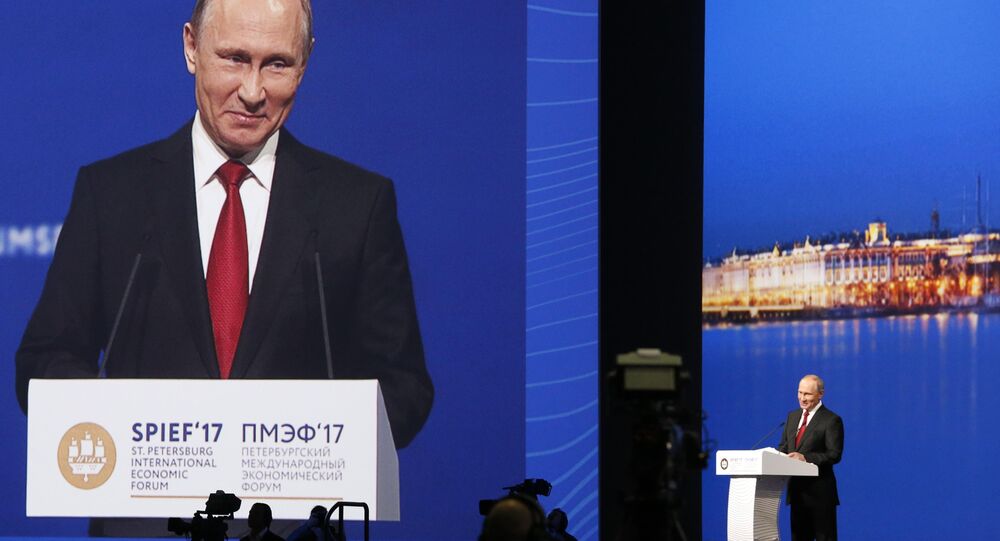 The St. Petersburg International Economic Forums (SPIEF) have long become a place where attending politicians and businessmen famously show their sense of humor cracking jokes and coining catch phrases that quickly go viral on the internet.

This year’s SPIEF was no exception, with President Vladimir Putin drawing laughs when, attending the forum’s plenary session on Friday, he jokingly told the participants who stood up to greet him, to stand at ease and relax.

Despite the fact that Kelly drew no comparisons with the situation with social inequality in the US, where Democratic presidential candidate Bernie Sanders spoke over and over again about one percent of Americans owning 90 percent of America’s national wealth.

"It is not moral, it is not acceptable, and it is not sustainable that the top one-tenth of 1 percent now owns almost as much wealth as the bottom 90 percent," he said at the Democratic National Convention in Philadelphia July 25.

Putin still told her that the Russian government was working on this and was prepared to offer more social benefits to those in need. He joked that if Megyn Kelly and her three children lived in Russia she would be eligible for maternity capital.

When asked about the US withdrawal from the Paris Agreement on climate change, Putin forced another chuckle from the crowd when he complained that European leaders do not regard him as one of their own.

“In any case, they don’t think so,” Putin said, responding to Kelly’s words about the European leaders’ quick response to President Donald Trump’s decision to walk away from the Paris deal.

Putin  joked that  Russia should be thankful to Trump as now he could be blamed even for bad weather in Moscow.

"We should be grateful to President Trump. I know that it has been snowing in Moscow; it's raining here [in St. Petersburg], it's very cold. Now we can put everything off on him [Trump] and the American imperialism. But we won't do that," Putin added.

He said the suspicions about the Democratic Party’s “manipulations” during last year’s US election were well grounded and that the resignation of Hillary Clinton’s campaign manager only proved it.

“Is this misinformation? This information is true, no matter where it came from. They should have apologized to the people before stepping down and promise that such mistakes would never happen again. <…>  It was not Russians who pushed for one Democratic candidate  at the expense of the other. It was not us, it was them who did this. Just stop it,” Putin emphasized.

“Here is Megyn who is a shining example of what high-class journalism is all about,” he quipped.

The tension mounted further after Kelly noted that she thought that Trump said that Russia could have conducted cyberattacks on his opponents, but that he didn’t think it would do it again.

“She thinks [so]. Listen, these are very serious matters of global politics we are talking about <…> It’s not just about taking an interview or penning a story for some newspaper,” Putin added.

“I thought the guy was going too far”

Vladimir Putin complained that blaming Russians for the Democratic Party’s failure during the US presidential election was tantamount to the anti-Semitic idea of “blaming the Jews.”

“It is always easier to say that it is not your fault. That it is the Russians who meddled in our election, and we’re the good guys. This reminds me of anti-Semitism: the Jews are to blame for everything, you know? An idiot cannot do anything himself, so the Jews are to blame. But we know what such attitudes lead to. They end with nothing good.”

Putin believes that Donald Trump was elected simply because his team was better prepared and worked more efficiently during the campaign period and that Russia had nothing to do with that.

“Sometimes I thought that the guy [Trump] was going too far. I was wrong. He turned out to be right because he  found a way to reach out to  the social groups he counted on and they came forward and voted him in. And the opposite team lost out, but they refuse to admit this mistake, that they simply failed to do it right,” Putin said.

He urged the US media to stop interfering in Russia’s domestic affairs.

“Just look at what your colleagues are doing here. They are all over us and doing what they want, enjoying themselves.  <…> This is a systematic and unceremonious meddling in our domestic affairs. This has to stop.” Putin emphasized.

He said that Russia has yet to ratify the agreement, adding that Moscow is waiting for the rules on resource allocation to be formed as part of the deal.

Putin warned against making a fuss over the US exit from the Paris deal and urged to establish conditions for joint work. He added that the agreement comes into force in 2021, adding that there's still time.

“An American woman sits and commands all”

© Sputnik / Vladimir Astapkovich
Putin Jokingly Blames Trump for June Snow in Moscow Amid US Exit From Paris Climate Deal
“You are talking about America, Germany, Russia, Trump, Hillary Clinton and Chancellor Merkel, but I don’t think that the situation calls for the presence of a judge or a lawyer like myself,” Modi replied.

“The Indians are smart people. Ancient philosophy. So different from us, simple folks, who always say just what we think,” Putin noted.

Ending the plenary session with another joke, Putin noted that Kelly was proof that the multipolar world had not materialized.

“We are sitting here discussing many problems. A representative of India, one of the world’s biggest countries, and of Russia, which also matters somewhat. [We have] representatives of the EU and of Moldova, a small post-Soviet country, which means that all regions are present here,” Putin said.

“Mr. Dodon said that the world has stopped being unipolar. But an American woman sits and commands all and I’m the last to get the floor,” Putin smiled thanking moderator Megyn Kelly for her good job.